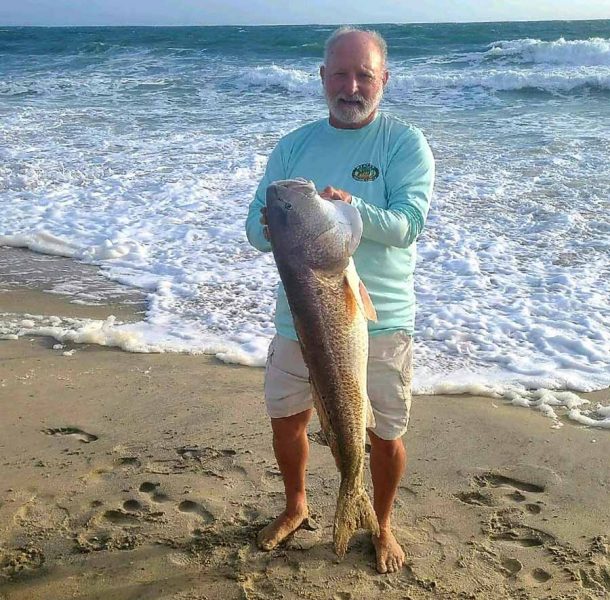 Gene Meacham holds up his big-time red drum, a 42-inch beauty that was measured, photographed and released back into the sea.

The Nags Head Surf Fishing Club’s 69th Annual Invitational Tournament returned to its roots this year by returning to Jennette’s Pier as the headquarters for the three-day event for the first time since the early 1950s.

The weather and fishing were both decent for the tournament, which features 480 anglers on 80, six-person teams. Anglers are encouraged to release their catches.

The tournament heated up big time for Gene Meacham of Kill Devil Hills and the Hot Liners of Nags Head when he hooked and landed a 42-inch red drum, something a little unusual for the event.

Red drum are the official state fish of North Carolina and are protected from overfishing by a management plan that only allows “slot” sized drum from 18 to 27 – inches to be kept. All others must be released alive.

Meacham’s red drum catch-and-release was enough for his team to win overall first place. Meacham also cleaned up with three more firsts — largest fish, most points and session winner. He was thrilled with the prizes including a rod and reel, tackle bag, silver plate and big trophy, all awarded during Friday night’s Award Dinner in Oceanview Hall at Jennette’s Pier.