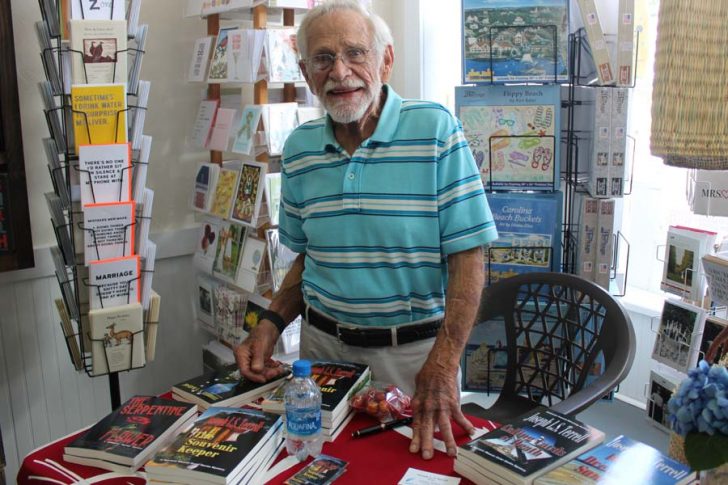 We’ll get over it because Joseph Terrell, the journalist, novelist and Renaissance man who passed away on Oct. 18 at age 92, struck me as the kind of person who simply would not tolerate pity.

It is ok to cry at the passing of Joseph, a Point Harbor resident, because a person who filled our lives with humor and evocative words and images is no longer with us. I suspect, though, that he would be one of the first to point out that tears will ultimately blur the way we see the world.

But then, what can you expect from an ex-newsman whose roots in the newspaper business date back to the now defunct UPI wire service — which happened to be the source of some of the most riotous tales he would recount.

Never, of course, were these off-color or even approaching the obscene. That simply was not him. For Joseph was something that does seem to be disappearing. He was a true southern gentleman.

He would speak with that wonderful slight southern drawl of his Raleigh upbringing, interspersing insight and humor in equal measure. In conversation he would wait patiently for you to make your point and say your part and then he would converse, talk about it, and you knew he was your friend.

I had a chance to play music with him a few times. I knew he had that standup bass and liked jazz, so I strummed a bit on guitar, discussed some thoughts about what we were doing. And then he sat down at the piano to bring those thoughts to life.

Maybe it was that patience in waiting for a reply, or the journalism background that guided him, or understanding rhythms and how they go together — because ultimately good writing is about the rhythm of the words. And one thing is for sure. Joseph was a hell of a good writer.

If his Harrison Weaver mystery novels are to be believed, the Outer Banks is the murder capital of the nation, if not the world — at least on a per capita basis. He had recently completed his ninth book in that series.

Yet the delight in his books was not the mystery or the murder, but rather the characters and their personalities; the way he integrated the Outer Banks into his stories. Every time I read or reread one of his novels, it was a moment to return to an old friend.

So let’s leave this with a passage from his first novel, “Learning to Slow Dance,” which gives a hint of Joseph’s ability to transform observation into words.

“Those were the years they learned to slow dance with girls who wore angora swathers and smelled of perfume and a hint of promise. The danced to records they played over and over, songs like “Dearly Beloved” and “Moonlight Becomes You.” Those were the years, too, when the war seemed far away to most of them even though they had older brothers and neighbors who were off fighting in European villages with names they couldn’t pronounce and in the Pacific on islands they had never heard of. Then the war would come back to them and seem very near indeed when word came of a death and a gold star appeared on a sad little flag the hung in someone’s window.”