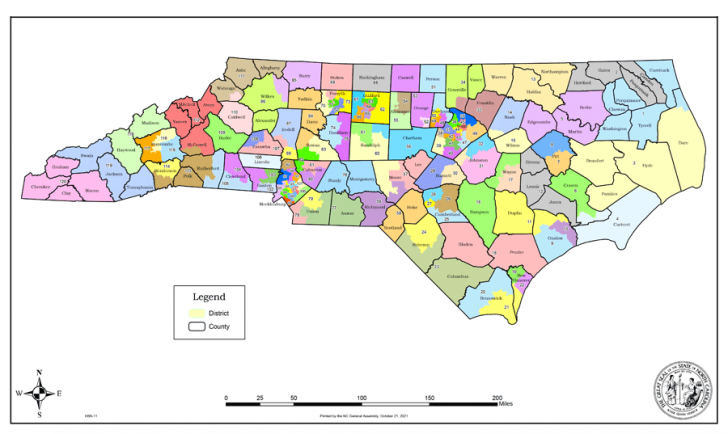 Local officials are upset about splitting the county into two NC House districts.

Now that the redistricting maps for the state’s congressional and legislative districts have been ratified by the North Carolina General Assembly, a number of legal challenges are expected to be filed against the new configuration, with charges of racial gerrymandering at the core of those challenges.

For his part, Dare County’s Republican NC House Representative Bobby Hanig says that the “Stephenson court decision” is what prompted the changes that are adopted in the new maps. That decision led to redrawing the maps during the last redistricting because of racial gerrymandering.

The Republican-created maps have sliced through Dare County on a north/south axis to place its voters in two different North Carolina House districts.

According to the language in the bill, the upper portions of the county – Duck, Southern Shores, Kitty Hawk and a portion of Kill Devil Hills — will be added to Currituck, Perquimans, Washington and Tyrell counties to form the new legislative lines for what will become House District 1.

The southern portion of Dare County, including everything south of the line in Kill Devil Hills and Colington, will be added to what will be known as House District 79.

Hanig said that having portions of Dare County in two different House districts can be a plus for the residents because it will increase their representation. But local officials are already calling foul on the House District 1 map that splits the county.

Dare County Board of Commissioners Chairman Bob Woodard lambasted legislators in a letter sent before the maps were ratified. He pointed to the need to keep the towns and unincorporated Dare County seeking the same goals and working as a cohesive unit.

Kill Devils Hills Mayor Ben Sproul also objected to splitting up the county. According to Sproul, the divide in Kill Devil Hills would result in 7 percent of the town being in one district while leaving 93 percent in another district. He pointed to the prospect of that creating confusion among of voters when it comes to knowing what races they are allowed to vote in.

Given that dynamic, State Rep Hanig, a Currituck County resident, wasted little time in announcing his plans to run for the new District 1 Senate seat in a statement on Nov. 5.

Change in Congressional District as well.