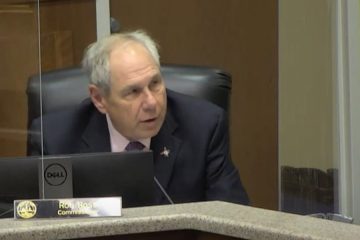 Commissioner Rob Ross mentioned the need for two-bedroom units on the site.

The Dare County Board of Commissioners is expected to vote at its Dec. 6 meeting on a conceptual plan for below-market and market rate housing at the county-owned Bowsertown property in Manteo.

In preparation, board members met during a special Nov. 15 meeting where they directed UNC-Chapel Hill’s Development Finance Initiative (DFI) to develop several configurations of mixed-income units on the site.

Dare County Manager Bobby Outten told the commissioners that the plan they settle on depends on whether they want to hold the cost on the project or set the number of units.

DFI’s Senior Project Manager Sarah Odio echoed that sentiment during the meeting, noting that there is wiggle room when it comes to the configuration.

“What is the most important thing here — is there a cap on what you want or can spend, is two-bedroom units a priority. The question is what are the priorities as a board.”

While no vote was taken at the meeting, board members seemed to reach a consensus that one potential configuration could be 120 units, with 30 of them being two-bedroom. At least 20 percent of the units would be rented based on a 60 percent Average Median Income ($35,000 for a family of two) in order for the county to be able to subsidize the project. The project would also include up to 70 units at market rate, depending on what plan commissioners settle on.

Commissioners seemed to reject one configuration offered by DFI at the meeting that included 66 low- or moderate-income units with only 11 of them two-bedroom units.

“The economy is screaming for [workforce housing], but I’m not clear on why they are all one-bedroom,” asserted Commissioner Rob Ross. Based on what he has heard, Ross added that “There are a significant number of folks talking about having children rather than one adult or just a married couple.”

Commissioners indicated they are willing to consider an investment from the county of between $7 and $9 million, and asked Odio to come up with several scenarios based on that investment. Outten noted that he and Finance Director David Clawson had identified $9 million as the cap the county could afford to contribute to the project.

Once the commissioners vote on a conceptual plan in December, DFI will send out Requests for Quotations to private developers to get a price on the project.

For her part, Odio said that “What it really comes down to is that you wanted to maximize low- and moderate-income units and also efficiently use public investment and attract private investment.”

The board of commissioners hired DFI in February 2020 to identify potential sites in the community for such housing. Bowsertown and possibly the Elizabethan Inn were identified, however Outten told commissioners during the Nov. 15 meeting that the Elizabethan Inn is no longer on the table due to the high cost of purchasing the property along with the zoning changes needed to develop it. Initially, the county identified that site as potentially able to accommodate 148 housing units.