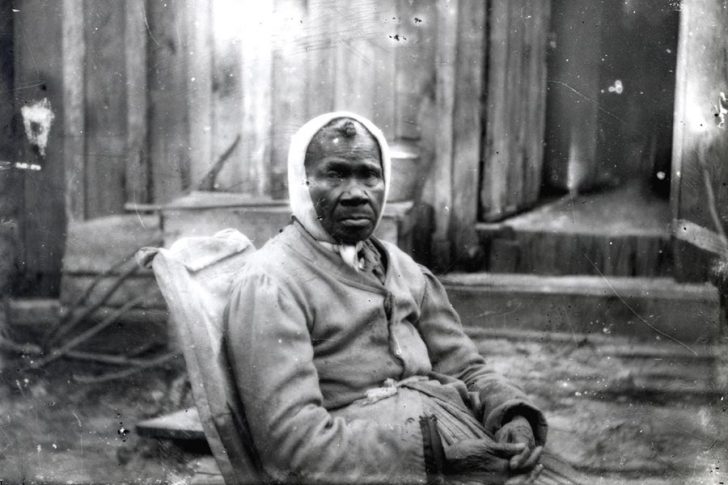 Miss Crissy Bowser died about 100 years ago in a cabin on Roanoke Island. But she hasn’t been forgotten. She’s thought to be the descendant of what were then called free blacks, those who were never enslaved. And her story helps tie together complex strands of local history and the intertwining relationships between races and ethnicities that helped shape the Outer Banks.

The black woman who cooked, did household chores and birthed babies spent her life on north Roanoke Island where she carried out many of the household duties at what is now called Island Farm.

She is thought to have been a free black person before the Emancipation Proclamation, but that is based on local stories from white folks who remembered her. The Bowser family is said to have never been enslaved. Instead, the first generation on these shores was spent as indentured servants.

The lives of indentured workers

In the 1600’s, pirate ships brought Africans to the Hampton Roads ports. They didn’t ask for money, but instead wanted food. The colonists traded for the men and women from West Africa, but afterward were puzzled by how to legally use them.

According to an investigation by PBS for its “Slavery in America” production, there were no slavery laws written at that time — thus the colonists decided to indenture the newcomers. They would work for a certain number of years to pay back the owners for their lodging and transportation across the ocean.

After their years of indenture were completed, they would be given their freedom and sometimes also land, clothing and food for a year. As the years ticked by, a resentment began to build on the part of the farmers against providing the indentured workers with so much when they became free.

“… Among the legal restrictions placed on free blacks was a 1717 Connecticut law that required aspiring black business owners to get official permission to open shop, and when Virginia law extended voting rights in 1721, it extended them only among free white men,” wrote Kimberly Sambol-Tosco for “Slavery in America” for thirteen.org.

Although there were no slave laws when the black workers were initially indentured, slavery was already common in the English colonies. Native Americans were routinely captured in battles with the English and forced into slavery although occasionally, they too were indentured. Because the indigenous people were familiar with the land and waters, escaping was a frequent problem for their owners.

Many were sold to plantation owners in the Caribbean and South America who needed the extra labor. Some found their way back home, but many either died of malaria or worked the remainder of their lives for the owners, according to history professor and researcher Linwood Fisher of Brown University.

As time passed, a significant number of Natives Americans were assimilated into black families. Today, although referred to as black, many people of color are multiracial.

“I’m black, white and Native American,” says Jackie Tillett, Dare County Board of Elections director. “Some of my relatives are as white as you, and others traveled the Trail of Tears.”

Free black people often had relations with white people or with black or Native American slaves. The future of children born out of such relationships depended upon the status of their mother. If she was free, the children also were free, no matter the status of the father.

During the early years of black indentured workers, although they were not treated as badly as some slaves, those workers were often treated harshly.

They were building their own lives after serving their indentures. But while they were free, colonists began to worry about them joining in slave rebellions. Eventually indenture was offered primarily to white immigrants, and colonists bought slaves outright.

Laws began to strip free black rights, such as the right to vote or hold office. But they held on to their status of being free.

The free black Bowser family managed to hold onto their status for probably more than 200 years – from the 1600s or early 1700s until the Emancipation Proclamation in 1862. Some of the offspring were deemed slaves if the mother wasn’t free. But for those lucky enough to have a free black mother, each generation grew.

The life of Crissy Bowser

Crissy Bowser was probably fortunate enough to have such a mother.

She lived across the road at the Adam Etheridge III farm from her birth around 1830 until she was about 20 years old in 1849. That is when she left to become the cook at the Etheridge farm owned by newly married Adam Etheridge IV. Her quarters were above the cookhouse until after the Emancipation Proclamation when the family decided to move the cooking facilities to the house. Losing the slaves it owned, the family could no longer have slaves and servants cook and carry food into the house for meals.

Crissy wanted to continue working on the farm and was rented two acres in exchange for part of her agriculture produce, but she only kept some chickens and a sow or two. She built a cabin there under a live oak tree and lived in it until her death in 1914.

She died in the house without ever marrying or having children. Her body was laid out in one of the sheds on the farm, and she was buried near the tree and cabin.

There are two other Bowsers listed as living on Adam Etheridge III farm in 1850. They are listed in the free black category — William was 16 and Vicy was 14. All three could have been the children of Christiana. The 1850 Census was the first time that free black people were named. Until that time, all black residents were noted as simply numbers, regardless of whether free or enslaved.

Crissy is noted in the 1880 Census as being black, and William and Vicy were characterized as “mulatta.” Christiana may have had two husbands – one producing Crissy and another fathering William and Vicy. Although that term often refers to black and white parents, at that time it also could be used for black and Native American.

According to the late Alma Etheridge Wilson who died in 2000, Miss Crissy delivered her. Miss Alma said that Lady Slippers wildflowers grew around Crissy’s house and were so beautiful that Louis Midgette tried to transplant them to the wildflower garden at Elizabethan Gardens. But he couldn’t get them to survive.

Crissy’s house was beside the wagon path that connected the north end of the island with the parts farther south. When US 64 was built, the path became a thing of the past.

Crissy kept a rocking chair in the yard in front of her door. Miss Alma said she would lean so people couldn’t see inside, but she thought that there was no furniture.

Writer’s Note: “Roanoke Island: The Forgotten Colony” by the late Arvilla Tillett Bowser and Lindsey Bowser, was an attempt to help those in the black community who are searching for their own roots. Information in the book is a good faith attempt to share knowledge, but the years before 1850 are still a mystery to many. The history is complicated and goes back more than 400 years.

The book includes bits and pieces of information that helped in searching for other sources with expanded explanations. Much of the black history of Roanoke Island is going to be found happenstance in white family Bibles, wills, etc.