WHAT TO WATCH ON TV
Stream On 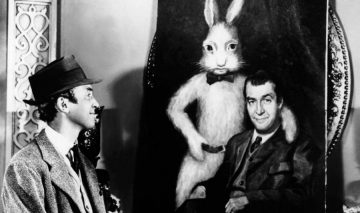 Noted TV and film characters who were heard about, but not seen

Yesterday, upon the stair,/ I met a man who wasn’t there/ He wasn’t there again today/ I wish, I wish he’d go away… (“Antigonish,” Hughes Mearns)

In Honoré de Balzac’s play Le Faiseur, a speculator’s favorite excuse for not paying his creditors was pretending to be waiting for his associate, Godeau, to come back from India with a lot of money. Godeau never shows up. Perhaps inspired by this, Samuel Becket wrote the absurdist play Waiting for Godot, in which two fellows spend most of their time hanging out on a lonely road somewhere, waiting for someone named Godot.

Comedian Bob Newhart was famous for employing the unseen character; many of his stand-up routines featured a “telephone” bit in which only Bob’s side of the conversation was heard.

From invisible giant rabbits on Broadway to Maris Crane on Frasier and further, unseen characters save makeup departments time and money—often they don’t even need to be cast. 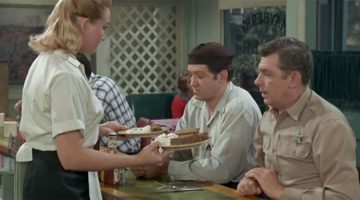 Could this have been Juanita? (No; it was Flora, who was dating Goober.) (CBS TV)

Outer Banker Andy Griffith released a recording in 1958 that was an ode to the lovely Juanita Beasley: “For behold, I love you all—your eyes, your hands, your eyes, your ears—your tooth!” In episode 28 of his eponymous TV show (the Citizen Kane of sitcoms), we first hear of Juanita. Sheriff Andy reads her name and phone number in his deputy Barney’s citation book, under “the new waitress at the Junction Cafe.” Barney (who is seeing Thelma Lou, that we met in the first episode of the series proper) is nontheless caught flirting with Juanita over the phone on several occasions, even singing her name in the sheriff’s office. (Barney, you dog!) 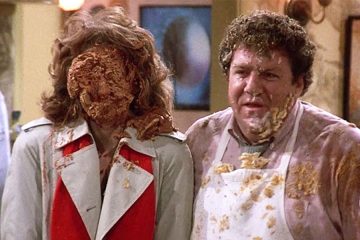 Vera Peterson (pie-faced) next to her husband Norm in ‘Cheers.’ (Paramount+)

Vera Peterson (nee Kreitzer) is Cheers barfly Norm’s wife. She knows that Norm (George Wendt) hangs out at Cheers but apparently doesn’t care. Even though Vera is never directly seen throughout the series, there have been a handful of times she’s been heard: “Thanksgiving Orphans,” “It’s a Wonderful Wife,” “No Rest for the Woody,” “Look Before You Sleep” and “Love Thy Neighbor.” Bernadette Birkett (George Wendt’s wife) provided her voice in those instances. She is briefly shown onscreen at the end of “Thanksgiving Orphans,” with her face obscured by a thrown pie.[^] 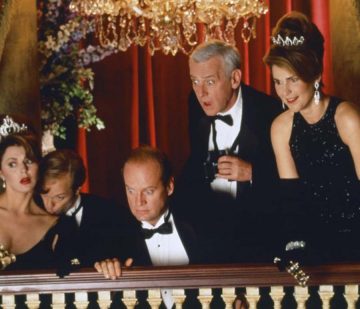 Those who catch a glimpse of the elusive Maris Crane will never forget it. (Paramount+)

Frasier: “Will Maris be joining us?”
Niles: Sadly, no. She had a bad experience there one Christmas Eve. The Italian soccer team was at the next table, Maris announced that she was in the mood for a goose, and, perhaps inevitably, tragedy ensued. (Episode 223, “The Innkeepers”)

Maris Crane, the sister-in-law of the show’s star Frasier, was originally meant to stay hidden for a few episodes as an homage to Cheers’ Vera Peterson, but the writers went a little wild with their descriptions and they soon realized that Maris had become uncastable.[^]

Maris has been described as being extremely thin, frail, and pale, as her father-in-law Martin describes Maris to a police dispatcher as being “very, very Caucasian.” Frasier once said she had no pigmentation and would “sear like an ahi tuna” if she remained in the sun for more than three minutes.

Lady, husband Niles’ dog, has been compared to Maris on a few occasions. The dog bears such a resemblance to Maris that Martin refers to it as “Four-legged Maris,” noting that it acts like Maris, barks like Maris and aside from the fact that it eats now and then, that they are dead ringers.

Maris was once seen by Martin, Frasier and Frasier’s producer Roz, who were hiding in her bathroom and was mistaken by Roz for a hat rack.[^]

The comedic lily of Maris was further gilded when she had an affair … with a Dr. Schenkman, one letter away from Schmenkman, a common joke name that apparently originated on Jamie Lee Curtis’ 1989 sitcom Anything But Love.

Elwood P. Dowd admires a painting of himself and his friend. (Universal Pictures)

“I’ve wrestled with reality for over thirty-five years, and I’m happy to state I’ve finally won out over it.” (Elwood P. Dowd)

The Mac Daddy of unseen characters is the title character of this lighthearted comedy about alcoholism and mental illness, adapted from Mary Chase’s 1944 play of the same name. Jimmy Stewart, who was Tom Hanks before Tom Hanks was, plays Elwood P. Dowd, an affable man who claims to have an invisible friend Harvey, whom Elwood describes as a six-foot, three-and-a-half-inch-tall púca resembling a giant rabbit. Elwood introduces Harvey to everyone he meets, and his social-climbing sister, Veta, increasingly finds his eccentric behavior embarrassing and decides to have him committed to a sanitarium.

This is comedy? Actually, it is, and fine comedy at that. Back in the day, when people were less offended by everything in the world, Harvey (the play won a Pulitzer Prize in 1945) was a beautiful fable about a nicer world than ours, and more than the eye can see.