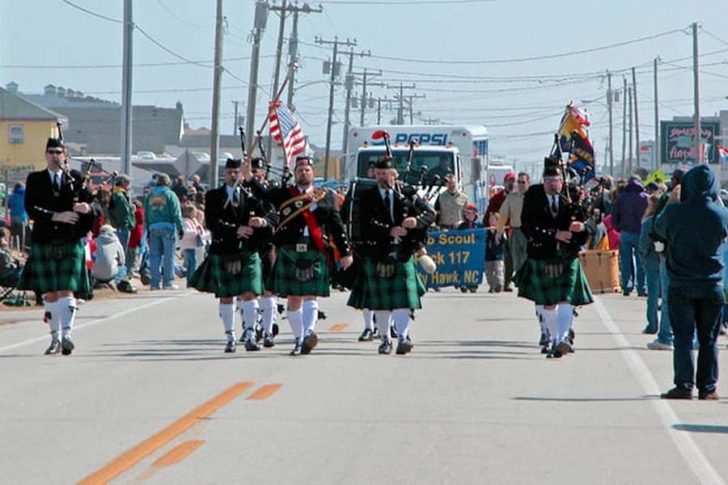 After two years of having to cancel due to COVID-19, Kelly’s Annual St. Patrick’s Day Parade will be back on in 2022. Parade Founder Mike Kelly, who has hosted the popular event for three decades, said the parade will be held on March 20 at 1 p.m. He added that more details about this year’s parade will be released after Jan. 1.

“I think this year is going to be an outstanding parade,” Kelly told the Voice in a phone interview. “I think we’ll end up getting good participation, and I think that people are so wanting to be out amongst each other.

Grand marshals for this year’s parade will be the Coastal Humane Society and The Outer Banks Hospital, both celebrating 20-year anniversaries. The one-mile parade route along Virginia Dare Trail begins at Bladen Street at Milepost 11.5 and runs north to Driftwood Street.

In the past, the parade has regularly drawn between 8,000 and 10,000 participants and attendees and is considered one of North Carolina’s largest St. Patrick’s Day parades. In 2020, Kelly made the determination to cancel the parade a few days before the event because of the rapidly spreading virus and emerging state restrictions. Last year, Kelly again announced in January that the 2021 parade would again have to be postponed due to COVID-19 concerns.

One of the Outer Banks’ iconic restauranteurs, Kelly closed the last of his three restaurants, Mako’s Beach Grille + Bar in Kill Devil Hills late last month after it was sold to Dare County earlier in the year. In 2019, the Dare County Tourism Board approved the purchase of Kelly’s Nags Head restaurant, Pamlico Jack’s. Kelly’s signature Outer Banks Restaurant and Tavern, also in Nags Head, was bought by German-based grocer Lidl in 2017. He still operates his Outer Banks Catering business.