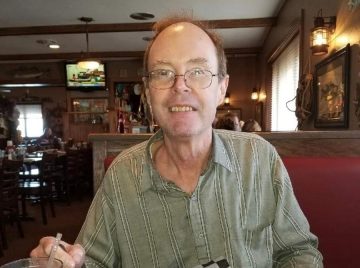 Richard “Rick“ Fox passed away at the age of 67 on December 2nd 2021. Rick or “Rockin Rick” as he was affectionately known, was a longtime resident of the Outer Banks and spent many of his final years in Kitty Hawk. Rick marched to his own beat, sported a signature balding mullet, and walked with an easily identifiable limp due to a motorcycle accident earlier in life. Rick was a gentle soul with a booming voice. He had a passion for rock n’ roll and fast cars, especially his 1969 red Ford Mustang Fastback Mach1. Rick was a fixture at the Western Sizzlin in Kill Devil Hills where he worked as a restaurant maintenance person for many years. If you saw his Mustang in the Sizzlin parking lot and commented on it, he gladly would have told you all about it!

Rick was fortunate to have Brad and Rhonda Loy, their dog “Bear”, and their extended family as his bonus or chosen family. They truly knew and cared for Rick more than anyone else and he loved them all.

Rick is survived by his brother Fred Fox and wife Fran of Wanchese, sister Judy Fox Ciraso and husband John of Massachusetts, nieces Patti and Kathy Day of Massachusetts, Alex Fox of California, and his nephew Tyler Fox of Colorado. Rick was predeceased by his loving parents Fred & Judy Fox of Kill Devil Hills.