WHAT TO WATCH ON TV
Stream On: Death, drugs and rock ‘n’ roll–Gram Parsons and the Rolling Stones 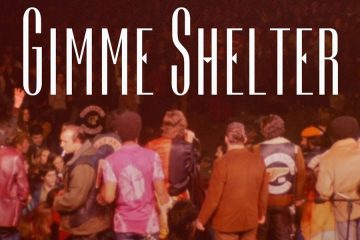 In 1969, the Rolling Stones capped the “decade of love” when their “security team,” comprising Sonny Barger’s Hell’s Angels, killed a concertgoer at Altamont Raceway Park in California, one of four deaths that occurred during the free festival.

In 1971 ex-Byrd and Americana music pioneer Gram Parsons holed up with Rolling Stone Keith Richards in the south of France. The Stones were looking to avoid tax problems in the UK, and Parsons had quit the Byrds rather than perform in South Africa. And while hard-partying Keith inexplicably thrives even unto this day, Gram died in 1973, not even 27 years old. But Gram Parsons’ story didn’t end there.

Mick [Jagger] got off the first helicopter with Ronnie [Schneider, the tour manager] when a kid comes running up to Mick and says: ‘I hate you,’ or something, and punches Mick right in the mouth. (Ethan Russell)

Filmmakers Albert and David Maysles and Charlotte Zwerin were proponents of the Direct Cinema movement, which was akin to gonzo journalism: if the reporter took part in events they covered, even influenced them, then so be it. It had worked well for Hunter S. Thompson. The Maysles decided to record the last weeks of The Rolling Stones’ 1969 US tour which was to end with a free concert in San Francisco’s lush Golden Gate Park, but wound up at the barren Altamont Speedway when San Francisco refused to issue a permit. Action at the new venue looked like a Heironymous Bosch painting or the painting of a Civil War battle.

Gimme Shelter opens with a listess rendition somewhere in New York of “Jumpin’ Jack Flash,” the “bad boys of rock and roll” looking more like the effete London School of Economics and Sidcup Art College grads they were than England’s answer to Muddy Waters. Hard case Brian Jones, who, at 27, was burned out, had quit, to die, while his replacement, baby-faced Mick Taylor, contributed to the band’s image of children playing dress-up. Even Keith Richards was still pretty.

In the next scene, though, as the Stones are being shown the dailies of the film in progress, they hear on the radio a narrative of the deaths that occurred at their Altamont show, and their smirks hide the discomfiture which had been on stark display onstage in the moment. Until Hell’s Angel Sonny Barger calls into the radio station, saying “I wasn’t there to police nothing, man” and calls singer Mick Jagger a jerk for getting them to “handle security.” Mick’s smile disappears like a fist does when you open your hand.

Then we’re taken back, to earlier in the tour, to a recording studio in Muscle Shoals, Alabama. The Stones are self-consciously preening for the Maysles’ camera during a recording session; it’s not a pretty sight. Listening back to a take of “Wild Horses” (which guitarist Keith Richards had given to his friend Gram Parsons to record first), drummer Charlie Watts looks into the camera as if he were in court, and the two Micks, Jagger and Taylor, retreat inside themselves, while Keith, his head back and his eyes closed, sings along silently.

“Childhood living … is easy to do.”

Mick Jagger’s reputation took a hit over his fecklessness in the face of the violent wave that swept Altamont (mainly because of the publicity of Gimme Shelter) … but he bounced back, hopefully wiser. There’s no business like show business. Scores in the nineties on Rotten Tomatoes.

While the Stones chose the sinister blues as their music, Their friend, Floridian Gram Parsons, spearheading country-rock with the Byrds’ Sweetheart of the Rodeo album, with his own band The Flying Burrito Brothers, and as a solo act, was drawn to the sunnier but melancholy sound of country and western music.

And Gram was, as Hank Williams might say, a card, appearing in a suit crafted by Nudie Cohn of Nashville emblazoned with marijuana leaves, naked women, pills and poppy flowers. Gram could pull at your heartstrings with ballads such as “Hickory Wind,” or straight-up moon the audience with ridiculous ditties like “Hippie Boy.”

So it’s little wonder that the film about Gram’s last days and beyond is a comedy—mostly.

His band The Flying Burrito Brothers had put smiles on the faces at Altamont before the tragic turn of events, but Parson’s personal arc of drug abuse ensured that it was only four years later that he joined Brian Jones in the afterlife. But not before he told his friend and road manager Phil Kaufman that when he died, he wanted his body brought to his favorite place, the Joshua Tree National Monument, and burned.

And therein lies an odd comedy.

Attending the funeral of ex-Byrd Clarence White (who had been killed by a drunk driver and could earlier be seen on The Andy Griffith Show, behind Andy’s left shoulder, here) with Kaufman in 1973, Gram expressed his distaste for the “high-mass Catholic funeral with all the mumbo-jumbo” and made a pact with Kaufman, who recalls Gram saying “If I die I want somebody to have a few beers, take me out to the desert and burn my body.” Kaufman said: “All right, it’s a deal. But would you do the same for me?” Gram said: “Yeah.”

Unfortunately, Parsons kept his end of the bargain first. He had finished his solo album Grievous Angel, and lit out to Joshua Tree to unwind with roadie Michael Martin and Martin’s girlfriend Dale McElroy. He ran into singer Scott McKenzie’s ex-wife, who hooked him up with liquid morphine, and Gram and his friend Margaret Fisher spent the day drinking and shooting up. Later, Margaret showed at Dale’s room in a panic: Gram had overdosed, and after an ice-cube suppository (yes, it’s a thing) was up and alert. But later, when Gram passed out in bed, he was taken in an ambulance to the hospital, where he died.

At the beginning of Grand Theft Parsons, a disclaimer reads, “Although this motion picture is inspired by a true story, certain characters and events are fictional.” Gram’s demise is compressed to a scene of a girl straddling Gram’s body in a motel room, crying into the phone, “He’s dead! Gram Parsons is dead!” On the other end of the line, Phil Kaufman (Johnny Knoxville) says, “Call an ambulance. And get out of there,” before we see a local TV news reporter announcing the sad event. While fans recount on the news report what he had meant to them, the irascible Kaufman ransacks Gram’s motel room and heads to the hospital, where he’s turned away by an indignant nurse who says Parsons’ post-mortem is in a few hours, after which his body will be returned to his family. “I suggest you speak to them if you want to pick through his personal effects … sir! Mr. Parsons is dead and no longer appears to need a road manager.”

Kaufman disappears into a supply room, where he trades his leathers for a lab coat and a stethoscope, finds and puts Gram on a trolley, and we’re off.

Until he’s chased off by a doctor. Now out of work, he’s soon confronted by Gram’s ex-girlfriend (Christina Applegate) brandishing a note from Gram and demanding his things, and he decides to find Gram’s body (now on its way to LAX en route to New Orleans and Parson’s family) and make things right at Joshua Tree. What follows is an exceedingly strange road trip, with Kaufman and Parson’s ex separately chasing his mortal remains, that might perhaps be more entertaining to those fans steeped in Parsons’ life work, in 2003 still a small community.

In 1973 Gram Parsons was pretty much inside baseball, as it were, with the Eagles, not Gram or the Burritos, finally reaching popular audiences with their own blend of country and rock. Even the Byrds’ seminal Sweetheart of the Rodeo album that Parsons had so much influence on only made No. 77 on the American Billboard charts, encountering active hostility in Nashville, where the Byrds were seen as poseurs. Tension had also developed between Parsons and the rest of the band, guitarist Roger McGuinn especially, with some of Parsons’ vocals being re-recorded, partly due to legal complications, and by the time the album was released in August, Parsons had left the band, and his billing on the record was reduced to three words. I guess I’m saying that given the poor showing the film made among audiences and critics, that you had to be there.

Featuring Michael Shannon (Boardwalk Empire) in an outstanding turn as a hippie from whom Kaufman rents a yellow, flower-painted hearse, in which to spirit his late friend to Joshua Tree.