‘It is a day for the children’ 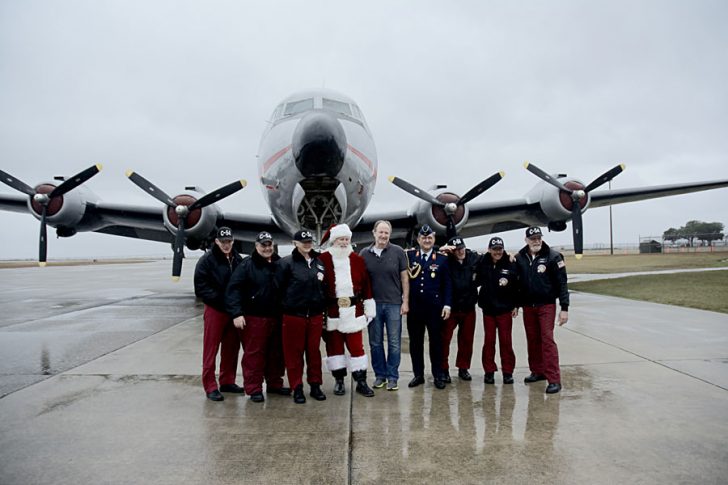 Under tough conditions, the Candy Bomber legacy lives on

For the crew of the Spirt of Freedom, it didn’t matter that on Sunday Dec. 19, the winds at Dare County Regional Airport were from the northeast at 21 mph, with gusts up to 35. It didn’t matter that it was spitting an intermittent hard-driving rain. Parachutes with chocolates attached were going to float to the arms of waiting children. It would just take an adjustment.

If the weather outside was terrible, there was room inside the terminal building and a balcony for a parachute drop. So Mike Halverson, the son of Col. Gail Halverson — the “Candy Bomber” who first dropped sweets from his C54 aircraft during the Post WWII Berlin Airlift — stood on the balcony and dropped parachute after parachute to the waiting hands of the children.

“This is great,” Halverson said. “I’m having a great time.”

Manteo resident Karin Edmond, who was a child in Berlin when Halverson was dropping candy to the children of that city, was worried at first. But she was pleased with how well the indoor candy drop went.

“I was scared this morning. It turned out really well,” she said.

This was the 22nd time the Spirit of Freedom has been a part of the Dare County holiday season — every year since 1998, except for 2020 when COVID kept the plane grounded. And it was only the second time that candy could not be delivered by air.

That the aircraft could make the flight at all seems a remarkable testament to perseverance and luck. The original Spirit of Freedom was destroyed by a tornado in April 2020 while on the ground in South Carolina. The aircraft was there to get a new FAA-mandated transponder installed, said Tim Chopp, founder of the Berlin Airlift Historical Foundation (BAHF) and Spirit of Freedom pilot.

The last candy run the C54 had made was the 2019 Manteo airdrop. “On the on the 18th of December, we flew it to Waterboro, South Carolina to have a new mandated transponder installed,” he said.

The power of the tornado was on full display as it hurled the four-engine aircraft through the air.

“It picked it up, flew it 180 yards into a hanger sustaining well over $300,000 worth of damage. [It] would have taken a tremendous amount of money and three years minimum to get it fixed,” Chopp said.  “It was very, very painful.”

The BAHF had flown the same C54 for 27 years. In the 1990s, there were still a number of the Douglas-built aircraft available. But by 2020, things had changed.

“In twenty-seven years, we had no reason to look for another airplane. It was a shock to find out how dried up the market,” he said. “There were only two viable airplanes in the country.”

One of those aircraft was located in New Smyrna Beach, FL, but it needed plenty of work. The plane just got back from the paint shop in Arkansas three weeks ago, Chopp said, just in time to make its first Candy Drop visit and be a part of the Dec. 17 celebration of the Wright Brothers historic flight.

“Here I am, once again, back not only in Dare County, but actually making a landing for the first time with this airplane at First Flight Airport,” he said.

The new C54 is the D model, one foot longer than the C54E that Chopp and his crew had been flying, making the new aircraft the largest airplane to land and take off from First Flight, according to Chopp.

For only the second time in the 22 years that the Candy Bomber has been coming to the Outer Banks, Gail Halvorsen was not able to make the trip. He is now 101 years old, and his health did not allow him to travel to the Outer Banks. The previous time he did not come with the Spirit of Freedom was in 2017 when he fell ill just before the scheduled visit.

Halvorsen’s first Candy Drop is remembered as a creative and instinctive act of kindness and generosity of spirit during the midst of an international showdown that threatened the lives of millions.

After the defeat of Germany in WWII, the country was divided into administrative areas with the United States, Britain and France having jurisdiction over the west and the Soviet Union controlling East Germany. Berlin was in East Germany and the same partition of the country’s largest city was also applied.

In June of 1948, hoping to starve the West Berlin people into submission, the Soviet Union cut off all land transport to the city from the west. The western allies were determined, though, to preserve the freedom of West Berlin. What followed was the largest and most sustained airlift ever mounted—and through those efforts, a city of 2 million was kept alive for a full year.

The plan required extraordinary coordination of supplies and aircraft, flying along three narrow air corridors and landing at Tempelhof Airport in Berlin. It was a 24-hour a day, seven-days-a-week, all-weather effort.

At that time, Halvorsen was 27 years old and a First Lieutenant, flying three round trips a day. He had flown over the city, but never actually been there, so on a day off, he hitched a ride to Berlin and took a look around. He was sitting with a friend by the airport in a Jeep when some kids approached them.

He offered the kids two sticks of gum and what followed was remarkable. The children carefully divided the two sticks of gum among themselves so that all of them could have some or at least be able to smell the sweetness of the wrapper. He realized that something as simple as candy was not on the supply list for keeping the city alive.

He told the kids he would drop some candy for them the next day, and they would know it was him because he would wiggle his wings. Thus, he quickly became known as “Uncle Wiggly Wings” by the children.

“I did it without permission. The reason I did is that I told these kids that if they came back the next day, I would drop it to them. If I waited two weeks, the kids would be somewhere else,” Halvorsen told the Voice in an earlier interview. “I didn’t realize how much affect it had. All I knew was, the kids didn’t have any chocolate.”

The children were delighted, but his Commanding Officer, Colonel Hahn, was not. The papers had broken the story, showing a picture of Halvorsen’s C54 dropping candy. The colonel did understand, though, the effect that had on the public.

“Not very good militarily,” Halvorsen was told, along with the instructions, “keep doing it, but keep me informed.” 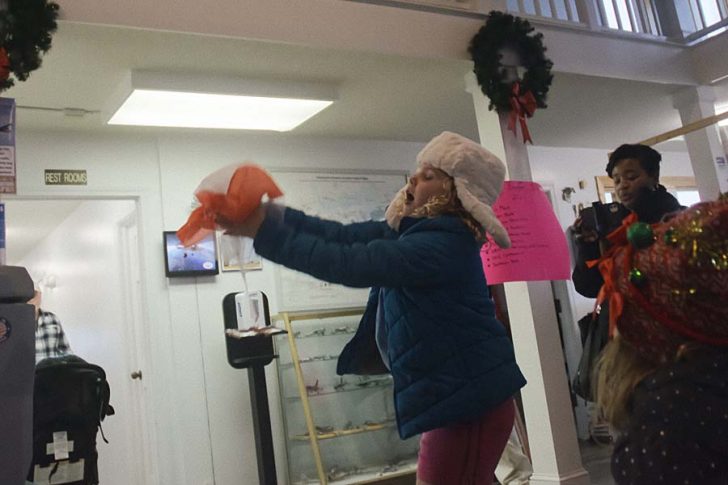 Whether dropped from a balcony indoors or from the cargo bay of a C54, catching a parachute with a Hershey bar is a thrill. (Photo credit: Kip Tabb)

Karin Edmond was one of the children of Berlin during that time. To her, Halverson is a true hero. And she has been a driving force behind bringing the Candy Bomber to the Outer Banks since 1998. But the real meaning of the event is how the youngest react to a piece of candy attached to a parachute.