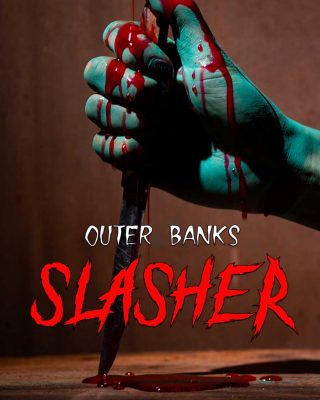 Bringing together a team of roughly 25 actors and crew members, the independent horror film “Outer Banks Slasher” will begin production on Jan. 3 on the Outer Banks.

Danny Taylor, the writer, producer, director and editor of “Outer Banks Slasher,” is a local entrepreneur based in Elizabeth City. He drew inspiration for the film while working on his comic book series, “Salt Monsters.”

“I found a love for writing when I was writing my comic,” said Taylor, who worked on the roughly 10,000-word movie script for three straight weeks. Taylor, who started the independent film production company Taylor Film Group and owns the local brand 2FIVE2, began writing the third issue of “Salt Monsters” when he had the idea to incorporate Blackbeard into the story.  Blackbeard, one of the most notorious British pirates from the late seventeenth and early eighteenth centuries, died on Ocracoke Island in 1718.

“I shared my story…with a couple [of] people, and they were like, ‘man, that’s really good, you should make a movie about that,’” Taylor said in a Voice interview.

The story is set in the present day and follows Edward Thatch, a 30-year-old handyman from Kill Devil Hills.  Aside from living a seemingly ordinary life, Thatch is a descendant of Blackbeard.

On November 22, the anniversary of Blackbeard’s death, Thatch becomes possessed by a family heirloom –– a 1718 coin that Blackbeard originally owned. Thatch turns into a serial killer and stalker.

“And that’s kind of all I want to tell because I want you all to see it,” said Taylor, who hopes the movie, which will be filmed entirely in the Outer Banks, will come out on Halloween.

“A friend of mine referred me to [Davis] and said ‘take a look at him. I’m friends with him, and he looks like he could play this part,’” Taylor said. “So, once I looked at his Facebook and looked at his pictures, I was hooked immediately, and I just said, ‘that’s him.’”

Taylor said he received over 2,500 applications after only a week of posting a casting call to the website Backstage.

The film will also bring in historian and Hatteras Island native Scott Dawson, who will star as himself. Dawson is the author of “The Lost Colony and Hatteras Island” and recently finished filming with Discovery Channel for an upcoming show.

Some locals reached out to Taylor to be in the film, including MMA fighter David Derby, who will play the detective. “Outer Banks Slasher” also stars Nastassia Morgan, Brooke Beyer and Minda Jani.

Taylor said audiences can watch the film on major streaming platforms and hopes to secure future deals so that the movie can appear elsewhere.