Did Manteo pull the plug on Bowsertown project?

Town board denies county request to link to wastewater system 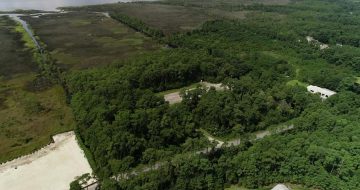 Dare County’s proposed essential housing project on Bowsertown Road hit a major roadblock on Jan. 5 when the Manteo Board of Commissioners failed to grant a request by Dare County Manager Bobby Outten to allow the project to connect with the town’s wastewater system.

After more than an hour of tense discussions in which board members expressed concern about the impact the Roanoke Island project could have on Manteo, Commissioner Jason Borland made a motion to allow the connection. That motion failed when it did not get second.

The request from Outten was a final step in several years of work to develop a conceptual plan for essential housing at the Bowsertown site. In February 2020, the county commissioners contracted with UNC-Chapel Hill’s Development Finance Initiative to identify potential sites and eventually solicit a developer. Bowsertown was identified as the most feasible and at its December meeting, the Dare Commissioners voted to move forward with soliciting a developer to partner with the county on a 120-unit mixed income development that included an $8 million investment by the county.

But without permission from Manteo officials to tap into its sewer system, the county finds itself back at the drawing board. Local officials have indicated that without that connection, the project would be less attractive to potential developers and would require a costly on-site package treatment plant, which would likely result in less units.

When interviewed by the Voice after the Jan. 5 meeting, Outten said that county officials will have to reevaluate how to move forward without the anticipated sewer connection.

“If the town doesn’t want to participate in the solution to our workforce housing problems, then we’ll figure out how to do it without the town and see what that means for that site,” he said.

During the discussions at the Jan. 5 meeting, the Manteo Commissioners voiced concern over the impact of the project on traffic and schools as well as the strain it would put on municipal resources such as fire and police. The loss of the municipality’s small-town feel was also a stated concern.

Commissioner Ruth Stetson questioned Outten about what made this particular project a priority. “This is going to take a lot from our wastewater treatment facility,” she said, adding that “only a sliver of teachers could live in this [complex] as opposed to maybe dedicating teacher housing.”

Commissioner Sherry Wickstrom voiced concern over the traffic congestion such a project would create. “That’s a lot of people to put at the end of Bowsertown Road,” she said, asserting that a traffic study should have been done. “I can promise you there will be impacts to traffic.”

Commissioner Darrell Collins said that a recent survey during the updating of the town’s master plan indicated that the number one priority of town residents was maintaining a small-town atmosphere.

“Ironically, [priority] number eight was affordable housing. I think affordable housing isn’t as important to the people of Manteo as we believe it to be,” he added. “It seems to me this is a one-way deal here.”

Manteo resident Beth Storie spoke during the public comment portion of the meeting, also voicing concerns over the impacts of such a project.

“We have worked for decades to keep the village atmosphere of Manteo, not just the downtown area,” she later told the Voice. “Once we overbuild Manteo, we can’t go back.”

In his interview with the Voice, Outten discussed some of the challenges of building an on-site wastewater facility at the Bowsertown site.

“We’ll just have to balance all the costs and see if there is a more economical, efficient way to do it there or somewhere else,” he said.  “We’ll go back and look at the site…if we have to treat the wastewater ourselves and if we can make it work, then we will.”

But he added that there are other sites the county will be looking at as well for an essential housing project “because we’ve got to do something to address this problem. We can’t just ignore it and hope it will go away.”