WHAT TO WATCH ON TV
Stream On: Reflections in a glass eye–biopics ‘Being the Ricardos’ and ‘Gleason’ 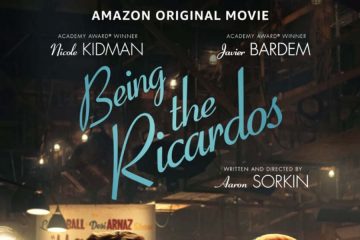 In July 2020 I took a ride in the Wayback Machine to 1951 to visit two transformative TV situation comedies—I Love Lucy and The Honeymooners [read the column here], both of which are still streaming widely today. I touched on the stars’ lives offscreen only inasmuch as they affected their shows, but we can go deeper than that, especially now that Aaron Sorkin and Amazon Studios have released Being the Ricardos, about I Love Lucy costars Lucille Ball and Desi Arnaz. And in 2002, Hallmark Entertainment broadcast the two-hour biopic Gleason on CBS, about the star and creator of The Honeymooners.

For all of Lucille Ball‘s and Desi Arnaz‘ accomplishments and innovations in TV, there were controversies as well: Ball was briefly investigated by the FBI and the House Un-American Activities Committee as a Communist, and Arnaz was apparently a bit of a hound, that is, a philanderer. Aaron Sorkin (The West Wing) examines one week in the production of I Love Lucy to write about them.

In 1953, as the cast is working on an episode of  the incredibly popular I Love Lucy show, the Los Angeles Herald-Express publishes, in bold red caps on the top of the front page, “LUCILLE BALL A RED.” In the same week (in Sorkin’s script), a tabloid account appears of Desi (Javier Bardem) cavorting with a starlet; also, Lucy (Nicole Kidman) and Desi drop a hot potato into the laps of their producers and sponsors: Lucy is pregnant, something that was never hinted at on network TV. (In the 1950s’ TV universe, bathrooms didn’t even exist and married couples always had twin beds.)

Sorkin has fictionalized the week of his story; the cast is shown working on “Fred and Ethel Fight,” a different episode than the one that actually began production when the Herald-Express hit the stands, but one which allows Lucy to be seen second-guessing the writers at almost every turn, usually to the advantage of the show. (The episode was actually “The Girls Go Into Business,” a relatively lackluster episode that reflects the toll taken on the production in the week shown.) The details of her HUAC accusation and Desi’s outing as a philanderer are massaged and streamlined. Lucy’s career, and to a lesser extent Desi’s, are seen in flashbacks, told by the I Love Lucy episode’s three scriptwriters years later (but still before 1988, when Executive Producer and writer Jess Oppenheimer died).

It’s a perfect storm of drama, with a million-dollar TV series and TV’s first ensemble cast hanging in the balance. The casting worked better than I expected: Nicole Kidman, apart from pulling Lucy’s famous faces (which she wisely doesn’t attempt), nails her voice and physical comedy; Javier Bardem is not as handsome as Desi was, but almost, and after one scene it no longer matters. The dark horse for me was J.K. Simmons as co-star William Frawley, but he’s a gifted actor and soon had me believing he was Lucy Ball’s pal Bill, who played Fred Mertz on the show; and Nina Arianda is perfect as Vivian Vance (who Lucy encouraged to stop losing weight, so she wouldn’t steal focus). Arianda is younger than Kidman, while Vivian Vance was Lucille Ball’s senior by three years—and looked older—but they make it work. Bits of “Fred and Ethel Fight” are replayed, in black and white, by the modern cast, and the results are uncanny, as is the drama—but this is Aaron Sorkin we’re talking about. 69% audience/74% critics’ score on Rotten Tomatoes. Perhaps you needed to be there, back in the day, as I was. I loved Being the Ricardos.

All right! Let’s go fool ’em! (Jackie Gleason to his manager before the taping of The Honeymooners debut, 1955) 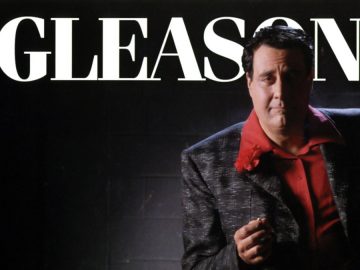 With Jackie Gleason we pretty much saw the real Brooklyn-born John Herbert Gleason on TV, but that doesn’t mean there’re no more stories to be told about his personal life. On the contrary, his larger-than-life persona could fill more than one biopic.

Jackie Gleason was the story, thanks in no small part to his tireless cultivation of his own legend, that of “The Great One.” But he wouldn’t have succeeded in becoming The Great One, which he did, if he couldn’t follow through.

Gleason begins with the great unreliable narrator (played very nicely by Brad Garrett, Seinfeld and Everybody Loves Raymond) himself sitting for an interview near the end of his life. (In 1986 Gleason filmed Nothing in Common with Tom Hanks; in 1987 he was dead at 71 of colon cancer, an illness he kept from the public.) He’s a little short with the interviewer, but not so much as to alienate her. He’s only too happy to contribute to his legacy, his story of which dissolves into a flashback to his childhood in Bedford-Stuyvesant.

We see where Gleason’s most famous creations Ralph Kramden and his wife Alice originated, in his parents’ blue-collar apartment. But while Herb and Maisie Gleason had two sons (Jackie’s brother died of meningitis at 14), Ralph and Alice have none, which suggests that Jackie effectively had no childhood to remember, or at least to use for comedy. When we watch The Honeymooners, it’s almost as if Ralph’s wife Alice is his mother, ultimately supporting a wayward Ralph when his often juvenile schemes fall through, and he is forced to in effect prostate himself at her feet. Which doesn’t mean The Honeymooners is not funny—with his main competitor Lucille Ball, Jackie Gleason produced still some of the funniest TV to date.

With Saul Rubinek as his often hapless manager and Kristen Dalton and Michael Chieffo both excellent as Audrey Meadows and Art Carney respectively, Gleason uses fresh storytelling and a dead-on script to pay homage to the Great One.

At the beginning of his career, Jackie, a young standup comedian in Vaudeville, is watching a pair of dancers from the wings with the announcer and a ventriloquist. The announcer tells Jackie that although the dancers are billed as twins, they’re just sisters. “Who cares,” Jackie says, “They could be brothers for all I care. Look at the pins on ’em!”

The ventriloquist’s dummy leans into the frame and says, “I’ll take the one on the right!” Jackie and the announcer exchange looks and Jackie says, “Puppets!”