Bridge will bypass Pea Island, but refuge access to remain 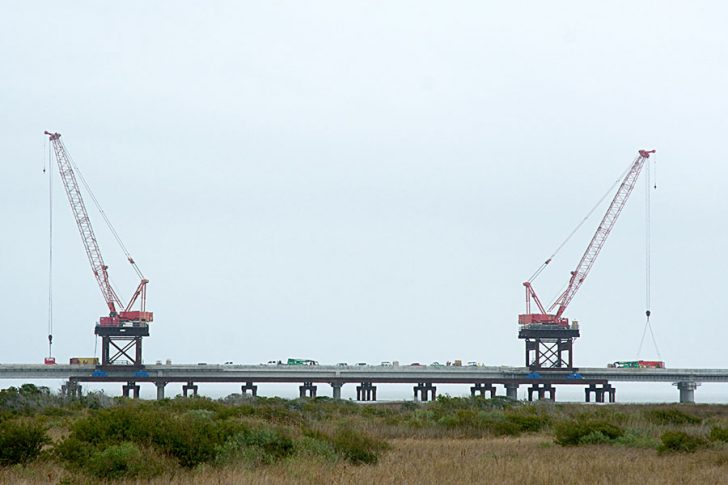 Twin cranes bookend a segment of the N.C. 12 bridge under construction Wednesday near Pea Island. The project is expected to be completed early this year. (Photo: Kip Tabb/CoastalReview.org)

Sometime soon, possibly before spring, the 2.4-mile “jug handle” bridge bypassing the troubled S-curves just north of Rodanthe will open to traffic, and after it does, folks will still be able to access the national wildlife refuge here.

The bridge, with a projected 100-year lifespan, is seen as the only practical solution to maintaining the transportation corridor connecting Ocracoke and Hatteras Island with the northern Outer Banks. It was also the result of a legal settlement in 2015 that had halted the entire Bonner Bridge replacement project because of conservationists’ concerns about protecting the Pea Island National Wildlife Refuge.

N.C. 12, the thin ribbon of highway that is the lifeline between the southern Outer Banks and the Marc C. Basnight Bridge over Oregon Inlet and Nags Head, is protected by a line of sand dunes. Where the road passes through the refuge, coastal storms regularly breach the dunes and create an impassable barrier. It typically takes two to three days before North Carolina Department of Transportation crews can reopen the road.

The S-curves are the most active area of Pea Island.

Tim Hass, communications officer for NCDOT’s Divisions 1 and 2 and the Ferry Division, told Coastal Review the bridge should open for traffic in the next two to three months. “The target at this point is late February or early March, but that is heavily dependent on weather and equipment,” he said.

When the bridge does open, about 2 miles of roadway extending north from Rodanthe through Pea Island National Wildlife Refuge is to be removed, along with the sandbags that were put in place in an effort to slow the Atlantic Ocean’s encroachment.

“Pavement and sandbag removal on the S-curves will begin after (the bridge opens), and will likely take three to six months to complete,” Hass said.

Once the road is removed, the U.S. Fish and Wildlife Service, which oversees the refuge, plans to maintain continued public access to the area.

“What we’ve got planned with NCDOT, where DOT is staging their equipment at the north end of the Rodanthe bridge on the ocean side, after they remove their equipment, that’ll be paved, and we’ll have a parking lot there. The public will be able to park there and have access to south end of the beach,” Pea Island and Alligator National Wildlife Refuge Manager Scott Lanier said.

“The paving of the north end parking lot will likely begin in January,” Hass said. Other than the parking lot, there are no plans for trails or development. But the site is to remain open to the public except during shorebird or sea turtle nesting activity.

“The only time that I could envision a portion of that being closed would be during bird nesting season if we had tern nesting or something like that. And that would be just like we do on the rest of the beach,” Lanier said.

Removing the road and sandbags is an important part of restoring the natural resilience of the habitat. New Inlet, about 2.5 miles north of the planned parking lot, may be a model for what will happen as natural cycles return to the S-curves.

In August 2011, Hurricane Irene breached the dunes at the New Inlet area of Pea Island. That inlet has subsequently filled in and the Capt. Richard Etheridge Bridge is located where the breach once existed. As Lanier explained, he expects that after the sandbags and road are removed, the habitat will rebound.

“We anticipate that, just like up at the Etheridge Bridge, that becoming great habitat for nesting sea turtles and colonial nesting waterbirds,” he said. “When that bridge went over that spot and that little inlet filled in after Irene — it is heavily used by those species. So we anticipate something similar there as far as habitat creation goes. That little portion of the refuge part of the island will be able to function more naturally.”

Lanier said that it’s never their intention to keep people off that refuge.

“Our visitors are an important part of what we do, but that access just may be different in the future,” he added. “In order for someone to have appreciation of that resource, they have got to be able to experience that resource. So, by no means are we looking to keep people off for refuge.”

To read more from CoastalReview.org visit their website at https://coastalreview.org/