WHAT TO WATCH ON TV
Stream On: Reflections in a glass eye II–biopics ‘Stan & Ollie’ and ‘The Three Stooges’ 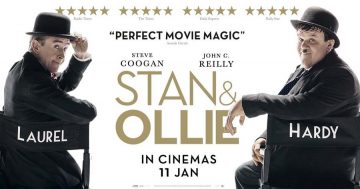 This column was bumped, regrettably, by the sad loss of Betty White in the prime of her life, but the show must go on. The show-biz biopics are back. Previously we had a look at the high-ticket Being the Ricardos, about Lucille Ball and Desi Arnaz, and Gleason; this week it’s the similarly high-concept Stan & Ollie (2018), about the British-American comedy team Laurel and Hardy, and The Three Stooges (2000), about the Horwitz brothers and their colleague Louis Fineberg, aka Moe, Curly and Shemp Howard and Larry Fine.

Traveling through the country is so thrilling, standing out in front on opening nights/ Smiling as you watch the theater filling, and there’s your billing out there in lights. (Irving Berlin)

In show business you’re on top of the world—until you’re not. Stan & Ollie uses historical events to reimagine the swan song of one of the world’s great love stories: that of Norvell Hardy of Harlem, Georgia, and Arthur Jefferson of Lancashire, England.

Jefferson, who took the stage name Stan Laurel, had come up through the music halls of Britain, and arrived in America in 1917 on the same ship as Charlie Chaplin, whose understudy he was. He moved from the stage to cinema, becoming an actor and director, and in 1921 starred with Norvell “Babe” Hardy, a singer, actor, and director, in the two-reeler The Lucky Dog (watch it here).

They didn’t work together again until 1927, but the ’27 gig commenced almost 30 years as one of the world’s top comedy teams. Stan & Ollie begins in 1937, with Stan refusing to renew his own contract with impresario Hal Roach, and brings us to a concert tour that Stan and Babe, who took the stage name Oliver, in honor of his father, made of Stan’s old stomping grounds in the music halls of England and Ireland to raise support and money for another film—in 1953.

In 1937, Stan (Steve Coogan) and Babe (John C. Reilly) are traversing a Hollywood studio en route to their soundstage. They are at the top of their game and world-famous. Babe’s ex-wife wants more alimony, but he wants to back a winning horse, and their desires are incompatible. Stan, already divorced, resists Babe’s invitation to a cruise in Mexico to meet more women. “I’m done with marriage,” Stan says. “I’m just gonna find a woman I don’t like and buy a house for her.”

Their boss, Hal Roach (Danny Huston), catches up with them and threatens Stan with the morals clause in his contract: One of Stan’s neighbors had called the cops when his second wife socked him after she found out about his girlfriend. Stan fights back, accusing Roach of being “a parvenu,” and demanding more money, as they are Roach’s biggest earners at this point and Stan feels they deserve a raise. “We’re setting up on our own!” concludes Stan. But only Stan. Babe has a separate contract and takes a part in Zenobia with Harry Langdon, which becomes a sore spot to the partnership.

But when the cameras roll, on the famous dance sequence in Way Out West (see the actual Laurel and Hardy do it here), Stan and Ollie are as one. Regardless of their personal problems, they effortlessly create a perfectly happy world, as seen next through the eyes of ecstatic audiences of men and women, black and white, rich and poor. (Coogan and O’Reilly recreate this iconic dance uncannily.)

Sixteen years later, in Newcastle, England, they struggle out of a taxi at a hotel from which they will begin a tour of England and Ireland while Stan works on writing and financing a reunion film, a nebulous project that seems as if it might slip through his fingers. (1950’s Utopia had bombed at the box office.) The girl at the front desk is charmed at their business, but says, “You just wait ’till I tell me mam it’s you! I thought you’d retired.” They also learn from her that the venue in town at which they’re booked is not the grand theater that their promoter has led them to believe. Babe, on the phone to his wife in the States, says of Stan, “We’re getting to know each other again. It’s complicated. It’s fine,” as Stan, in his room, works at a typewriter and recalls the fallout and results of his fight with Roach sixteen years earlier.

On the present tour, they battle back from half-filled but appreciative houses to a sold-out Lyceum in London, but Stan can’t contact the producer of the new film, who seems to be avoiding them. Babe loses more money on the horses; their wives join them in London, and things comes to a head.

Stan & Ollie is a bittersweet review of the careers of two of the twentieth century’s greatest comedians, played beautifully by Steve Coogan and John C. Reilly. I would recommend following it with a viewing of the originals in Sons of the Desert (available here), where it is always 1934 and the skies are clear. 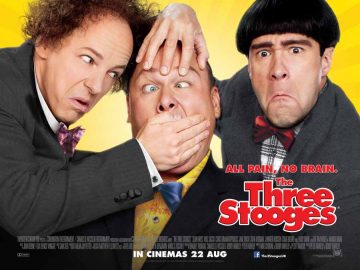 Yesterday they told you you would not go far, that night you open and there you are/ Next day on your dressing room they’ve hung a star, let’s go on with the show! (Irving Berlin)

When I was a kid (don’t ask!), Three Stooges shorts were shown routinely on TV, but for the Stooges themselves this constituted a comeback that was as much a surprise to them as it was a gift for the nation’s children and young-at-heart.

Their act began in the early 1920s as part of a vaudeville comedy act billed as “Ted Healy and His Stooges,” consisting originally of Healy and Moe Horwitz, who, like his brothers, had anglicized his family name to Howard. Over time, they were joined by Moe’s brother, Sam (“Shemp”), and actor, boxer (!) and violinist Lou Fineberg, who went by “Larry Fine.” The four appeared in one feature film, Soup to Nuts, before Shemp left to pursue a solo career, which included films with W.C. Fields, Abbott and Costello, and Olsen and Johnson. He was replaced by his and Moe’s younger brother, Jerome “Curly” Howard, in 1932. Two years later, after appearing in several movies, the trio left Healy and signed on to appear in their own short-subject comedies for Columbia Pictures, now billed as “The Three Stooges.” From 1934 to 1946, Moe, Larry and Curly produced over 90 short films for Columbia. It was during this period that the three were at their peak popularity.

The Three Stooges, adapted from the book The Three Stooges: An Illustrated History, from Amalgamated Morons to American Icons, details their comeback while reviewing the dramatic careers of the six members of the Three Stooges. It opens in 1959 as an aging Moe Howard runs errands for his former agent Harry Romm on the studio lot at Columbia Pictures. A young television executive from Boston has traveled to L.A. to convince Moe and the Stooges to come back East and perform their act live in theatres and on television, but Moe is not interested. The film then flashes back to 1925, when comedian Ted Healy hires the Howard brothers for his vaudeville act.

Some interesting tidbits about the Stooges are teased, including that Shemp apparently was very uncomfortable with the physical comedy, which is counterintuitive: Shemp Howard was a tough-looking Brooklynite, who held his own as a wise-cracking (and often ad-libbing) mug in roles including the pied-piper bartender in W.C. Fields’ The Bank Dick and an ex-con in Another Thin Man.

Which brings me to my only gripe: John Kassir (Tales from the Crypt) plays Shemp, but Kassir looks about as tough as David Hyde Pierce’s “Niles Crane” on Frasier, and is a little too on-the-nose as a tremulous performer who is physically afraid of his brother. On the other hand, Paul Ben-Victor (The Wire) and Evan Handler (The People vs. O.J. Simpson) are very good as Moe Howard and Larry Fine respectively, and Michael Chiklis (The Shield) is terrific as Curly, who did his brother Moe a favor by leaving his successful vaudeville act in New York for Hollywood to fill in for Shemp, and in so doing, brought the Stooges to national prominence. After an early performance (during which they impressed Jack Warner), Curly complains to Moe, “Whaddya mean by slapping me like that?”

Moe, thinking “here we go again,” says, “Geez, I’m sorry, Babe…” when Curly says, “Next time make it harder, so they can hear it in the back row!”

The film details the magic moment on a soundstage when the team meets their first “Foley guy,” the sound-effects specialist who made their on-screen antics even better, and the tragic moment when illness first decimates the act, ultimately leading to their retirement, and Moe in 1959 running errands at Columbia Studios, and skeptically agreeing to take his surviving brother and Larry and their wives back East for a personal appearance. That appearance began a huge Stooges renaissance—to me and my peers watching them on national and local TV, and so on to this day, still all over the dial, not to mention at 6:00 p.m. on Saturdays on MeTV.

By the way, the Farrelly Brothers released a new “Three Stooges” film in 2012; not a biopic, but a new Stooges adventure with Sean Hayes, Will Sasso and Chris Diamantopoulos in the title roles. I haven’t seen it yet, but I will: I’m already a fan of Will Sasso (MadTV) and Sean Hayes (Will & Grace). Here’s a trailer.