Work to move from west to east on 4.3-mile roadway 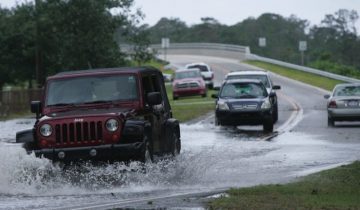 Colington Rd. on one of its sloshy days. (File photo: Outer Banks Voice)

Colington Road will see the start of a major facelift on Jan. 31, with some prep work already underway, according to N.C Department of Transportation (NCDOT) officials.

“They are ready to hit the ground running,” stated NCDOT Engineer Brandon Tatum, speaking of the Raleigh-based Fred Smith Company, which has been hired by NCDOT to complete the project. “This is a unique project, considering the amount of traffic” on the road.

Back on Jan. 5, NCDOT announced the imminent start of the oft-delayed $20 million project on the winding 4.3- mile road, a project that over the years had encountered some opposition from resident and businesses in the vicinity. It is scheduled to be completed by Oct. 15, 2023.

The work includes pavement resurfacing; seven-foot-wide paved shoulders between Colington Drive and Bermuda Bay Drive to accommodate bicyclists and pedestrian; Realignment of several substandard curves; additional turn lanes; and raising the grade on flood-prone sections of the road and other drainage improvements to reduce the frequency and severity of flooding incidents

Survey crews have already begun to do stakeout work and installing silt fences and safety fences. Clearing of the project area will follow and will take place from the west end to the east end of the roadway.

Lane closures will always involve reducing traffic to one lane only, Tatum noted. “We are going to maintain traffic at all times,” he said, adding that construction, for the most part, will occur from the western end to the eastern end.

“Certain areas may need to be done because of seasonal weather, temperature, restrictions…where they may have to jump around a little bit, but I think the plan is to try to focus west moving east.”

Under-the-road Crossline drainage pipes that need replacing in four environmentally sensitive areas along the stretch will need to be installed before April 1, when a moratorium in those areas begins and lasts until September.