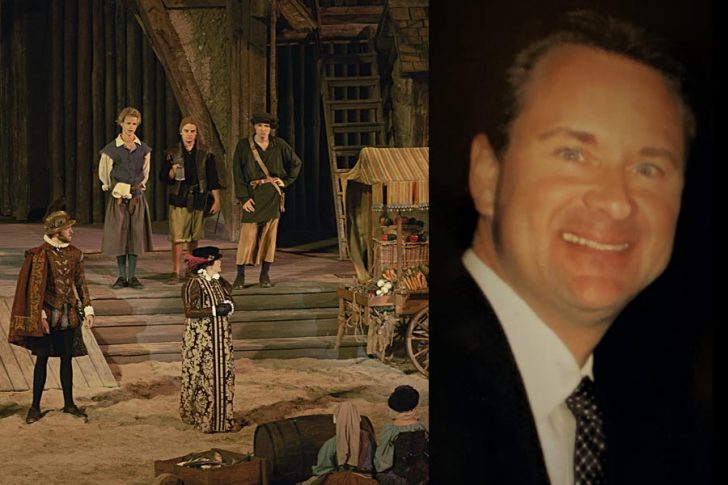 After 15 months as general manager of the Roanoke Island Historical Association (RIHA) and The Lost Colony, John Ancona announced on Jan. 26 that he is leaving that post to take a position closer to his home and partner in Charlotte, NC.

In a statement posted on the Lost Colony website, Ancona called that decision “very difficult,” adding that “I have so enjoyed my journey these last 15 months with getting to know the extraordinary board of directors, administrative and artistic staff and the community partners who have dedicated their time and talents to RIHA and The Lost Colony…I am deeply proud of the accomplishments this organization has achieved and the successes we’ve been able to celebrate during my tenure.”

(This is the first in a two-part series)

His departure comes after a controversial re-imagining of the play and a season of internal turmoil for the Lost Colony company that led to a Dec. 13 report by the Community Relations Committee (CRC) of the RIHA Board. The report was designed to address issues that had been raised about management, living conditions and the director’s actions that occurred during the 2021 season.

The report’s published conclusions, some of which acknowledged problems, were:

But in Voice interviews with about 20 members of the company regarding the 2021 season, the consensus is that the CRC report fell well short of addressing their concerns.

“The ‘community relations’ or whatever they’re called, they pretty much dismissed everything. They didn’t believe us,” John Underwood, 2021 Technical Director for The Lost Colony said.

The concerns of “some of the alumni of the show and members of the community” mentioned in the report were expressed in more than 40 letters the RIHA Alumni Committee received detailing a confusing and very difficult work environment that letter writers allege included unsafe practices, management indifference to complaints and an artistic vision that members of the company felt was unfocused and inconsistent with Paul Green’s The Lost Colony. Green was the Pulitzer Prize winning playwright who wrote the original script for the 1937 production.

In a statement to the Voice, RIHA Chairman Bradley said, “We took the concerns that came to our attention seriously, convened a special committee of the board to interview the complainants, and issued a public report from our findings…Many of the questions you continue to ask are related to confidential personnel matters so we simply cannot address them publicly. Our board was determined to work in a transparent manner to sort through these issues and the report that you have read is our final word.”

CRC Chair Tess Judge told the Voice that “we gave careful consideration to all the concerns that have been raised. The nine recommendations in our report address the specific actions we believe should be implemented…As we say in our report’s conclusion, “We call on everyone who loves The Lost Colony to move past the difficulties and differences of the past season, to come together in a positive and supportive manner and to work together to keep this great tradition alive.”

The recommendations of the CRC report included fostering “better communications” and implementing measures to work toward that goal, such as regular meetings between management and representatives of the play’s cast and crew. Other recommendations include allowing public comments at RIHA Board meetings and appointing a permanent Community Relations Committee to “provide an ongoing vehicle for hearing and discussing concerns.”

Contacted during the reporting of this story and before his resignation, Ancona did not respond to questions from the Voice about the past season.

Following a September meeting with the Alumni Committee, the CRC began working on its report. Although the more than 40 letters had been shared with RIHA board members, and many of the letter writers had indicated a willingness to be contacted, none of those interviewed by the Voice said they were contacted by the CRC for the report.

Penny Whitehurst Adams, an alumna of the play whose daughter was in the 2021 production, wrote in an email to the Voice: “How could reconciliation ever happen when the…director, general manager, and [RIHA Board chair] are not only somehow absolved of any wrongdoing or incompetence, but to add salt into the wound, are to be…given total support.”

The letters sent to the Alumni Committee describe leadership and management as out of touch with cast and support crews, with one of the letter writers who wishes to remain anonymous writing, “Your actors, your crew, your volunteers, your box office, and anyone else who was involved; they counted on you. And they were let down, truly. Not by the COVID…But by the sheer tone deafness that came from upper management…”

On August 17, the final few shows of the season were canceled as COVID was detected in the cast. That meeting, canceling the remainder the season, has been cited as particularly contentious and confrontational. According to multiple sources, Issues of working conditions on the set of the play, safety, communication and housing conditions were raised. In acknowledging that General Manager Ancona found the meeting difficult, the CRC report notes, “No staff member or crew supervisor brought any of the concerns to his attention during the season.”

But a number of sources say concerns were raised before that meeting.

In June, Costume Designer Mariah Hale sent a letter to the RIHA Personnel Committee outlining professional and personal concerns about the 2021 season. Her letter was significant enough that the RIHA board attorney interviewed Hale in July.

“There were plenty of problems and questions [company] council members brought up and we had plenty of conversations about them,” assistant master electrician Jesse Bryon wrote in an email to the Voice.

Problems were communicated before the season began. In October of 2020, then Lighting Director Josh Allen, owner of WHOCO Lighting and Controls, met with the key members of The Lost Colony creative team to discuss lighting needs. Allen noted that Whiting, Associate Producer Lance Culpepper and RIHA Board Chair participated in the meeting. Ancona was not hired until November of 2020.

At that meeting, Allen said that in addition to the creative lighting Whiting wanted, there were basic needs that had to be addressed. As the new season got closer and no action had been taken, he sent a Feb. 26 email, writing in part, “There are things that must be repaired and upgraded in lighting and sound to be able to mount a show this season. We cannot mount a new production with the grand expectations from Jeff — or even mount the traditional 2019 production for that matter —under existing conditions without addressing a number of these system failure issues.”

In a September 2021 follow-up letter to the Alumni and Community Relations Committees, he also addressed the safety elements of lighting system that were failing.

“There are artistic wants and there are facility safety needs. Poor leadership has opened The Lost Colony up to tremendous liabilities. We have somehow limped through another season without appropriate: a. Aisle lighting; b. Path lighting; c. Egress lighting; d. Emergency lighting,” he wrote.

The CRC report did not explore or discuss communication that may have occurred within the Lost Colony office. There were only four members of The Lost Colony management team —Ancona, Associate Producer Lance Culpepper, Operations Manager Katie Stone and Accounting Manager Joe Brzuchalski. Culpepper and Stone were cited in numerous interviews and letters for their professionalism and as a resource when help was needed. The CRC report does not indicate if they were interviewed.

Culpepper and Stone were contacted for comment for this story by the Voice but did not respond.

Bryon, who interacted with Culpepper and Stone during Company Council meetings and on the set, concluded that ultimately, the leadership problems at The Lost Colony were a result of mismanagement at the top.

“I want to express continued love and support for Lance and Katie Stone,” he wrote. “Earlier in the season, there were frustrations in working with the office, but by the end it was apparent that a lot, perhaps all of it, came from John Ancona’s management and the power restructuring of the board/management from Kevin…Lance was not allowed to do his job.”

These frustrations reportedly came to a head at that August meeting near the end of the season. Although housing, health and safety concerns and work conditions were part of the discussion, a big issue to emerge was how management handled key cast members returning to college before the end of the season.

In particular, letters and interviews brought up the manner in which the production team tried to fill the role of Wanchese played by Zakia Blackburn. A mechanical engineering major, according to numerous cast members, he returned to school to resume his studies about a week before the end of the season.

For a number of reasons the role of Wanchese is not easily replaced. A principal character of the play, the anger and distrust he feels toward the English because of the death of Wingina is important to understanding why The Lost Colony failed. He is also involved in a number of fight scenes, which include gunfire.

The CRC report indicates that Ancona was not aware that Native American actors would be returning to school before the end of the season, stating that, “The actors had signed contracts committing to work through the end for the season. Some members of the company have known the actors planned to leave early, but management wasn’t informed.”

According to McGinnis, management was informed almost six weeks before the end of the season.

“Right after July 4 weekend, I talked to Lance Culpepper and said ‘Hey Lance, here’s what I’m hearing…’” he said. At that time, he said, Culpepper indicated that “…we’re working on it.” At the end of July, McGinnis said he repeated his warning to Ancona while standing in his office doorway. And a cast member with direct knowledge of the situation confirmed that around July 4, Blackburn told Culpepper that he would be leaving the company before the end of the season.

The handling of the issue appears to represent what the CRC report called “communications problems.”