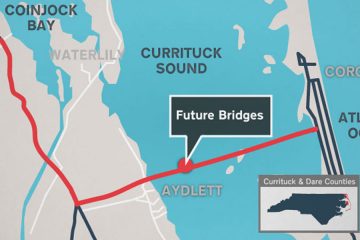 As had been widely anticipated, the Southern Environmental Law Center (SELC) announced on Jan. 31 that it is appealing U.S. District Court Judge Louise Wood Flanagan’s Dec. 13 ruling  against its suit that wants to block the construction of the Mid-Currituck Bridge.  See the Dec. 19 Voice story on that ruling.

In a related development, Southern Shores Town Council decided at its Jan. 5 meeting (Jan. 5 Voice story) to take some short-term steps to try and push the bridge project along, included working with the Duck Town Council to possibly get involved in the legal proceedings.

Here are excerpts of the SELC announcement.

On behalf of the North Carolina Wildlife Federation and local residents from the Currituck mainland and northern Outer Banks, the Southern Environmental Law Center today filed an appeal asking the United States Court of Appeals for the Fourth Circuit to declare the illegal and outdated analysis prepared for the Mid-Currituck Bridge invalid.

The $500M Mid-Currituck Bridge has not been through a legally required, robust public review of costs and impacts since 2012 despite significant changes over the past decade. The cost of the bridge has risen, while the cost of cheaper alternative solutions has gone down even further.  At the same time, projections of sea level rise now show the roads around the proposed toll-bridge will be under water and unusable long before the project will be paid for.

“The Mid-Currituck Bridge is an extraordinarily bad investment for North Carolina,” said Kym Hunter, senior attorney with the Southern Environmental Law Center.  “The bridge would primarily serve out-of-state tourists and only for a few weekends in the summer.  When you factor in the limited use, the availability of cheaper and less damaging alternatives, and that much of the bridge project area will soon begin to flood and become less reliable due to sea level rise, it is hard to think of a worse way for North Carolina to spend scarce transportation funds.  We urge Governor Cooper to think again before making this big and costly mistake.  In the meantime, we will continue to challenge the illegal analysis in court.”

Resident group “No Mid-Currituck Bridge,” and the North Carolina Wildlife Federation originally challenged the agencies’ decision to move forward with the Mid-Currituck Bridge in 2019.  In federal district court for the Eastern District of North Carolina, the groups previously argued that the agencies violated the law by failing to prepare a supplemental environmental impact statement that considers up-to-date climate data and development trends.

They also argued that the agencies failed to assess the environmental impacts associated with increased development that the bridge will cause and failed to consider less damaging and less expensive alternatives, including a multi-faceted transportation solution offered by the groups that would ease peak congestion days.