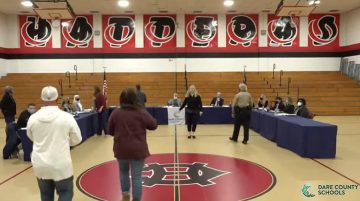 The rule changes come after a meeting when Dare to Share group members approached board members with documents.

In an apparent response to disruptions at recent meetings over the past few months, the Dare County Board of Education met virtually during a Feb. 28 special meeting to revise its policy, titled “Board Meeting Procedures,” in an effort to avoid such incidents in the future.

The revisions, unanimously approved by the board on first reading, addressed everything from the public comment period to how the public should submit documents to the board.

The changes include language that prohibits substitute speakers from taking the place of those who signed up to speak during public comments, as well as not allowing speakers to donate any portion of their time to another speaker.

They also address the placement and use of recording equipment during meetings, stating that it must be done in a “manner that is not disruptive or distractive to the conduct of the meeting.”

That revision appears to be a direct response to an incident at the Feb. 8 meeting when members of the Dare To Share group approached the board to deliver 28 letters of intent to file claims against the school district, alleging that the letters were based on 26 state, federal and international laws they contend the district is violating.

“At no time during public comment or any other time during the board meeting will the speaker or meeting attendee approach the board table unless invited to do so by the chairperson,” the policy revisions read. “Any person who fails to comply with this provision will be removed from the meeting.”

The revisions also stated, “Actions that violate these guidelines and/or disrupt the orderly operation of a meeting may result in the disruptive individual(s) being directed to leave by the presiding officer and/or being removed from the premises.” It continued, “Failure to vacate the meeting after being directed is a criminal offense in violation of N.C. General Statute §14-288.4 and §143-318.17.”  Both offenses are considered misdemeanors in North Carolina.