Ukrainian exchange student in Ocracoke is far from her besieged country 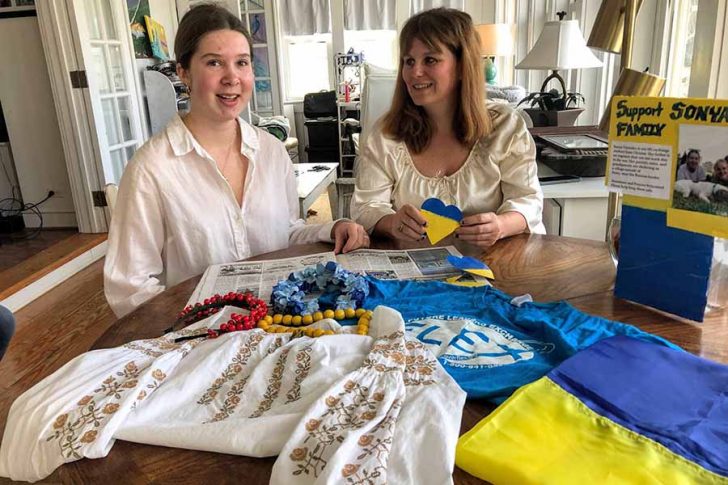 We share the same biology, regardless of ideology
But what might save us, me and you
Is if the Russians love their children too.
— From Sting’s 1985 song “Russians”

Sonya Voitenko, a Ukrainian exchange student at Ocracoke School, is putting on a brave face as her family weathers warfare in Ukraine.

Hailing from Sumy, Sonya, 16, is a junior at the school and lives with Sonya and Daniel Allen and their daughters on Creek Road.

Sonya arrived in August via the government-run Future Leaders Exchange Program (FLEX). She is supposed to be here until June 20 but will probably stay through the summer. “They’re not sending kids back during a war time,” Allen said. “That’s not going to happen.”

Sumy, which is in the northeastern area of Ukraine and along the Russian border, is in the way of Russian troops trying to advance from Kharkiv to Kyiv, the capital.

Her parents, Vitaliy and Liudmila, and her 12-year-old sister, Masha, have fled the city and are sheltering with her paternal grandparents, who live in the countryside.

“All men from age 18 to 60 are required to stay in the country to defend,” Sonya said, noting that many teenage boys are also helping to defend their country. Fortunately, her closest friends are safe at the moment, but the situation changes daily.

The threat of the Russian invasion has been in the air for months, but then on Feb. 23, it started.

“It was 12 or 11 at night here” she said. “I was texting my friends and they said, ‘I’m sorry to interrupt, but the war just started.’ I was shaking; I was so nervous. I started calling my parents.”

The Allens and Sonya stayed up that night and watched a war unfold on TV.

“We kept her home the next day and just watched the news,” Allen said. In addition to lots of texting to Sonya’s family daily the Allens have an international phone that Sonya can use.

“My friends are suffering from that right now,” she said. “A lot of people have been killed a lot of kids been killed that’s the saddest part.”

The Allens and Sonya are working on how to get money to Sonya’s parents.

“It’s going to be difficult to get it directly to their Ukrainian account, because there are a lot of cyber attacks on the Ukrainian banking system,” Allen said. “If it does get taken over by Russia, who knows what’s going to happen to your bank in Ukraine.”

Allen on Friday opened a bank account for Sonya at the First National Bank here so that they can set up a PayPal account to receive donations to eventually help Sonya’s family.

Jason’s Restaurant will hold a fundraising spaghetti dinner for Sonya and the Sunflower of Peace Foundation from 11 a.m. to 2 p.m. on Sunday,  March 20, for $10 a plate, and the Ocracoke United Methodist Church plans to donate some of the proceeds from the recent pancake supper to this effort.

She didn’t know she would end up on Ocracoke until after the group of students landed on United States soil. Her life here is much less hectic than what she has experienced as a city kid.

Despite coming from the different landscape of a vibrant city, Sonya enjoys the rural and multi-cultural aspect of Ocracoke – the fishing heritage, the Hispanic component, the beach.

“Ocracoke has been a really supportive place,” she said.

Islander Ruth Toth found a recipe for Ukrainian Easter bread, made it and brought it to Sonya, who gave it a thumbs up.

While she has a thick accent, Sonya has been taught English since first grade; French in fifth grade, also Russian and Ukrainian.

One of her after-school programs was British club where she was able to further hone her English.

A star athlete in her Sumy high school, Classical Gymnasia, Sonya favors volleyball. She played volleyball and basketball here and joined the Ocracoke cross country team — something she had never done before — and went to the state games.

She has studied folk dance, plays the piano and hopes one day to go into international business.

In Sumy, Sonya has 16 courses per semester. Here, she has four.

“She’s used to doing things constantly,” Allen said. “She’s used to going, going, going all day until she goes to bed. Three sports is considered down time compared to what she’s used to. This is the most downtime she’s ever had in her life.”

But Sonya’s been handling the trauma of what’s happening in Ukraine well, Allen said.

“She stays focused,” she said. “She wants to know how she can help out. So, we started the fundraisers to see how we can support the (Ukrainian) community.”

And now, the Allens, who themselves have worked in the Peace Corp in eastern Europe and elsewhere, want to help the Voitenkos directly.

Sonya does not know when she and the other exchange students will get back to their country and what they will find when they do get back.

“For as long as her parents want her here, we’re going to keep her here,” Allen said.

Sonya, of course, is worried about when or if she will ever see her family again.

“It’s kind of depressing,” she said.

But she wants to stay strong – just like Ukrainians of the past who weathered a famine in the 1930s in which 3 million people died, world wars and more.

“Our culture shows that we are tough, and we’ll get through it,” she said.

In the meantime, she advocates this personal diplomacy.

“I encourage all the people here and students to be exchange students or host students,” she said. “I’m grateful to be an example of an exchange student. Maybe some people will follow my example.”

For more photos from this story and more from the Ocracoke Observer visit ocracokeobserver.com