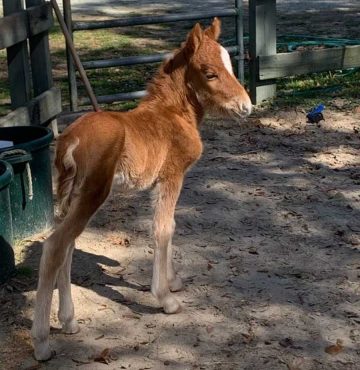 The newborn foal that now resides with the Foundation for Shackleford Horses. (NPS Photo)

On April 4, the National Park Service (NPS) issued this statement on an unusual and fateful interaction on the Cape Lookout National Seashore between a wild horse and some clearly well-meaning visitors — one, however, with a cautionary message.

On March 26, 2022, a group of visitors on Shackleford Banks encountered a newborn foal in the Wade Shore area. The foal followed the group for about two hours; there were no other horses present during the time the foal followed them. A stallion, when it is trying to protect its group of mares, might drive them away from a location where a foal is sleeping, then keep a mare from going back to get her foal because he does not want to lose her. In this case, the foal might lose contact with its harem.

When the visitors moved to their boat to leave the island the foal tried to follow them. With the best of intentions, thinking that the foal would drown, they lifted the foal into the boat and departed, thereby removing the horse from its natural habitat, its mother, and the herd.

Once a foal has been removed from the seashore, it is unlikely that the park can reunite it with its dam (mother). Although these visitors thought that they were doing the right thing, this foal can’t be returned to Shackleford Banks and will now live a life as a domesticated animal, rather than as a wild stallion. The foal is currently in the care of the Foundation for Shackleford Horses.

Dr. Sue Stuska, the park’s Wildlife Biologist explains: “For a short period early in a foal’s life, it instinctively follows its dam without necessarily knowing which creature she is. When separated, the foal will follow other horses or even people.”

As a result of their actions, the visitors have been cited for removing the horse from Shackleford Banks, and the park is working with this group to assist with future educational opportunities and community service projects that will benefit Shackleford Banks and the horses protected there.

March is the beginning of foaling season on Shackleford Banks, a part of Cape Lookout National Seashore which along with its wildlife, is federally protected. Visitors observing strange animal behaviors may call the park visitor center (the phone number is on the brown information signs on the island) or 911 to report to park staff. Anything urgent, serious, or potentially life threatening to the visitor or the wildlife should immediately be called in to 911 which will then dispatch park resources to the site.