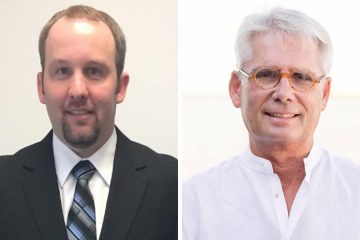 Political newcomer Mike Burrus of Wanchese is challenging incumbent Ervin Bateman of Kitty Hawk for the Dare County Board of Commissioners at-large seat in the upcoming May 17 Republican primary election. Democratic candidate Heather Euler of Buxton will face the winner of that primary in November.

Burrus, 38 and a native of Wanchese, works as a sales representative and installer at LL Flooring in Kill Devil Hills. Bateman, 67 is a sixth generation Outer Banker and the owner of Sugar Creek Restaurant in Nags Head. He is seeking his second term on the board of commissioners.

In separate interviews with the Voice, both candidates discussed some of the local issues facing the county, what they would bring to the position and their priorities, if elected.

Burrus said that if elected, he would make being proactive and accessible a priority, with a focus on long-term planning and representing the entire county, regardless of political affiliation. He said that he’d like to see more proactive solutions to county problems, such as affordable housing, the overregulation of commercial fishing and the badly shoaled Oregon Inlet.

Speaking of the current board of commissioners, he said, “They’ve been reactive for years and they wait until the last minute. We’ve had some of these problems for decades, and then now it’s, ‘We’re going to do something about it because people are going to get mad and vote us out.’”

On the key issue of affordable housing, Burrus said he’d like to see the county pursue a rental program that provides a tax incentive for property owners who provide year-round housing rather than spending money on centrally located housing units to address the problem.

Burrus also said he’d like to see the county reinstate its own home health and hospice operation, which was sold to BrightSpring Health Services for $2.9 million last year.

“I was so disgusted to see them sell that because the price was right…It doesn’t have to be profitable, it’s a service we’re providing for the elderly of this community who are maybe entering the last stages of their time with us and need assistance and not all of them have the insurance that can qualify with a private company,” he said,

Burrus also cited the issue of Bateman changing political parties in 2021. “If his reasoning is something along the lines of, ‘Well, [the Democratic party] no longer represents me’ …when did they change, and what was the change?”

After serving on the Kitty Hawk Town Council for a number of years, Bateman won his bid for the Dare County Board of Commissioners at-large seat in 2018 as a Democrat against Republican challenger Anne Petera.

Bateman said he’s running for re-election because he has more to do as a county commissioner.

“I think I have been very effective in setting goals and then achieving them,” he told the Voice. Among the accomplishments he takes pride in is the expansion of the Dare campus of the College of the Albemarle, progress in bringing affordable housing to the county and the establishment of the Dare Guarantee Scholarship that ensures county high school graduates can attend COA for free.

Bateman, himself a member of the recovery community, also cited his efforts to help that community in Dare County with the establishment of the Dare County Drug Recovery Court and plans to expand Dare Challenge, a local addiction recovery program on Roanoke Island.

As far as commitments to keeping the inlets open, Bateman pointed to current construction of the county’s own dredge, the “Miss Katie,” which is scheduled to arrive here this summer.

“We are keeping taxes down,” Bateman added. “This year [in the proposed 2022-2023 budget], we’ve given raises, we’ve given a five percent COLA [Cost of Living Adjustment] at a time when a lot of people aren’t doing that, so we’re being responsible with the consumer’s money.”

Of his party affiliation change to Republican in 2021, Bateman said, “I didn’t leave [the Democratic party], they left me…their whole agenda I think has switched. I’ve always been a conservative. I’m a business guy.

“Republican, Democrat, I’m still the same guy who fights for everybody. There’s not a more conservative candidate out there now, but there’s also not a candidate who understands more what it’s like to be the small guy.  And I’m fighting every day, not only for social issues, but whatever comes up on my plate.”