Hambone has left the building, but stays in our hearts 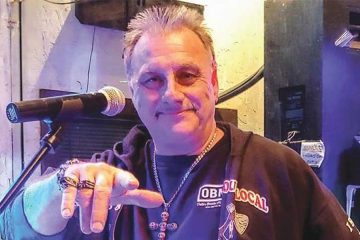 DJ Hambone knew how to make people feel safe and courageous enough to get on the stage and make a memory for themselves, their friends, and family. The most memorable DJ and Karaoke Host to ever grace the stage in the Outer Banks passed away last week.

I might also say, without question, that he was the most memorable karaoke host in the nation. When Johnny Cash sang “I’ve Been Everywhere,” he may have had him in mind. And it wouldn’t surprise anyone if Hambone knew Johnny personally. He crossed paths with many famous entertainers in his sixty-five years, but that isn’t how he achieved notoriety across the country. Let me tell you what I know of his story.

Born Hampton Wolfe in 1956 in Portsmouth, Virginia, and later serving in the Navy, he spent a year or two in Florida, and returned to Virginia where he honed his musical chops with a stint as the house sound tech for “Bill Deal and the Rhondels” in their club.

It was not surprising, then, when as a lifetime Harley Davidson biker, he would join the Patriot Guard Riders who “have an unwavering respect for Fallen Military Heroes, First Responders and honorably discharged Veterans.” These military bikers serve as a solemn motorcycle escort for funerals in the Outer Banks. You would see Hambone leading the escort with flags donning his Harley at just about every funeral for these men and women. Paul Pendergrass, a local carpenter, remembers seeing him at a funeral for a former member of the Eagles Club just recently.

Hambone often quietly and humbly hosted fundraisers for locals in need and took it as a mission to raise whatever he could — often hauling his mammoth 1980’s speakers to DJ for any folks who needed him. Let me tell you, he had those speakers since they were new, and they made enough noise to fill a stadium. I remember when he used to carry them around in an old ice cream delivery truck…no joke.

For quite a few years, Carol Ann Angelos, was fortunate enough for Hambone to make his karaoke home a permanent fixture in the Jolly Roger restaurant in Kill Devil Hills where he played his tunes seven days a week for nearly a decade. At a time when karaoke had been fading away in most big cities, he packed the house most every night.

I spoke with Carol Ann earlier this week, and she mentioned how much he helped others in need and how he was looking forward to her new expansion of the “Jolly” which included a new bar for him to host soon — and how heartbroken she and the staff were that he would not see it.

Carol Ann did mention that Hambone was quite a colorful character sometimes finding himself in a few uncomfortable situations. “He was more than worth every bit of the trouble,” she added with a wry smile.

Hambone was always busy with a new idea for his show, saying he wanted to keep it fresh so his local following would enjoy the show as well as the visitors. Vivian Santana who works in events and catering mentioned that she would leave work to unwind by dropping in to listen to the singers and finally made her way up to the stage to sing one evening. When she was finished, Hambone whispered, “Vivian, you have a great voice, but I think you might want to try a different song,” coaxing her to sing Etta James’ rendition of “At Last,” in which she shined. She added, “His smile was infectious and his heart bigger than most knew. I will miss him, his laughs, his hugs.”

Here is why I mentioned his national acclaim. Many people had a tradition of visiting our beaches annually, making sure they stop in to see Hambone. Often, he announced their names when they entered as if they were long-time friends. I saw him do this when I would go to sing a few tunes, myself.

If you got there at the beginning of his gig, you’d hear him singing George Strait or Elvis, maybe the Righteous Brothers’ “You’ve Lost That Lovin’ Feeling,” while wearing a cowboy hat Alan Jackson gave him. These people came from Ohio, Pennsylvania, Virginia, California, Michigan, South Dakota, New York, New Jersey, and like Johnny Cash sang, “Reno, Chicago, Fargo, Minnesota, Buffalo, Toronto, Winslow, Sarasota …” They took home their memories of Hambone and how he made them feel like a star or made them laugh at their friends singing “YMCA.” He was “family” to them all.

Hampton Wolfe, who chose to call himself Hambone has left a space that can never be filled. He was kind, loving, quirky, headstrong, even a bit difficult at times, but for me, he was my dear friend whom I had the pleasure of witnessing him bring joy to so many.

So, to everyone who loves him, find a place to be “Sitting on the Dock of the Bay” and raise a glass to the master.

Here is a link to a gofundme account: Please help our HAMBONE fund, AKA my Amazing dad