WHAT TO WATCH ON TV
Stream On: Time to revisit ‘The Godfather,’ with ‘The Offer’ 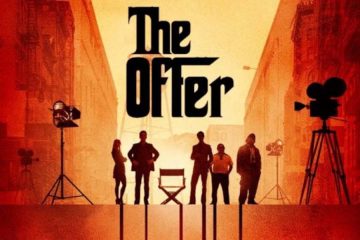 The Offer is a new miniseries on Paramount+ based on Oscar-winning producer Al Ruddy’s never-revealed experiences of making The Godfather. Ruddy was one of the key figures along with Francis Ford Coppola, Bob Evans and Mario Puzo, behind the original production. Need I say more? All right, next week I’ll add some notes on the original Godfather trilogy, the “Godfather Saga” TV miniseries of 1977 and more.

Many anecdotes are known about the making of Francis Ford Coppola’s monumental 1972 mob film The Godfather, such as that the studio wanted Robert Redford to play Michael Corleone; that the source novel and screenplay’s author Mario Puzo supposedly based a mobbed-up entertainer character on Frank Sinatra etc. These stories are but the tip of the iceberg.

In 1972 Al Ruddy produced a film version of Mario Puzo’s 1969 roman familial, The Godfather, a multi-generational novel portraying the fictional Corleone crime family, from patriarch Vito Andolini’s childhood in turn-of-the-century Sicily, to his son Michael Corleone’s organization in 1955 Las Vegas. The Godfather was for a time the highest-grossing film ever made, earning between $250 and $291 million at the box office. It received universal acclaim from critics and audiences, with praise for the performances, particularly those of Marlon Brando and Al Pacino, the directing, screenplay, cinematography, editing, score, and portrayal of the mafia. It was ranked the second-greatest film in American cinema (behind Citizen Kane) by the American Film Institute.

The behind-the-camera drama was almost as epic, according to The Offer’s executive producer Ruddy.

In Hollywood, computer programmer Al Ruddy (Miles Teller), who has left the Rand Corporation, is excited to meet producer Bob Evans (Matthew Goode) in a restaurant. He has ideas about screenwriting, he’s sharp, and talks the studio into producing an unprecedented sitcom about Nazis, Hogan’s Heroes. Back in New York, Mario Puzo (Patrick Gallo) is disappointed after a promotional reading of his latest, autobiographical, novel, The Fortunate Pilgrim, fails to draw more than three people. His agent tells him that it wasn’t so bad; “People perked up listening to the part about the mafia guy” and suggests he write a novel about the mob.

He objects, “I spent my childhood in Hell’s Kitchen running from those guys! Now I write a book about them so they can put a bullet in my head?” After the agent leaves in a cab, he’s waylaid by a shadowy figure who says, “You owe our friend a thousand dollars” and beats Puzo when he can only produce forty. So he writes the mob book, it becomes a best seller, and Profaci family capo Joe Colombo (Giovanni Ribisi, Sneaky Pete) tells the Mafia commission that Frank Sinatra is complaining about a character that Frank thinks is based on him. “He’s not wrong about this.”

Al Ruddy flies to New York and talks Puzo into coming out to Hollywood and writing a film treatment, and Francis Ford Coppola (Dan Fogler) and Paramount Pictures into producing “an ice-blue, red-hot movie about people you love!” as he tells Charles Blühdorn, the owner of Gulf+Western, which had bought Paramount Pictures. When Joe Colombo hears about the movie, he forms the Italian-American Civil Rights League—but doesn’t stop there.

The scenes between Puzo and Coppola as they’re hammering out the script are gold. Watching The Godfather, we notice that after Michael kills Sollozzo and Capt. McCluskey, he hangs on to the gun until he’s almost out the door of the restaurant despite Clemenza’s implicit instructions. Coppola explains to Puzo at the typewriter why this one detail is the turning point of the Michael’s arc. I don’t know if Coppola and Puzo actually had this dialog, but like mythology, it illuminates a truth.

The production mostly has the same brown look as The Godfather; the actors look like the figures they portray, and include Colin Hanks (Fargo), Michael Rispoli (The Sopranos) and Michael Gandolfini (Sopranos prequel The Many Saints of Newark) among others. Anthony Ippolito is a ringer for young Al Pacino.

A lot of the action mirrors Coppola’s movie! Just four episodes have been uploaded, with episode five coming online today, but I’m in—and don’t want to to get out!

NEXT WEEK, Just how many “Godfather” films and collections are out there?

TV NEWS OF THE OUTER BANKS: On May 6, the Charleston, S.C. County News reported that auditions for extras were being held through May 11 for season three of Outer Banks.

“Extras of all ages and ethnicities are needed for filming during the second week of May. Casting agency Kimmie Stewart Casting posted the following descriptions…” Read it here. We originally heard about season two from some Bankers who had been visiting Charleston; if Bankers who are there now auditioned it might help the verisimilitude of the show (which is sufficient enough for national TV—it’s only OBX locals and habitual visitors who spot some of the clunkers on the show).