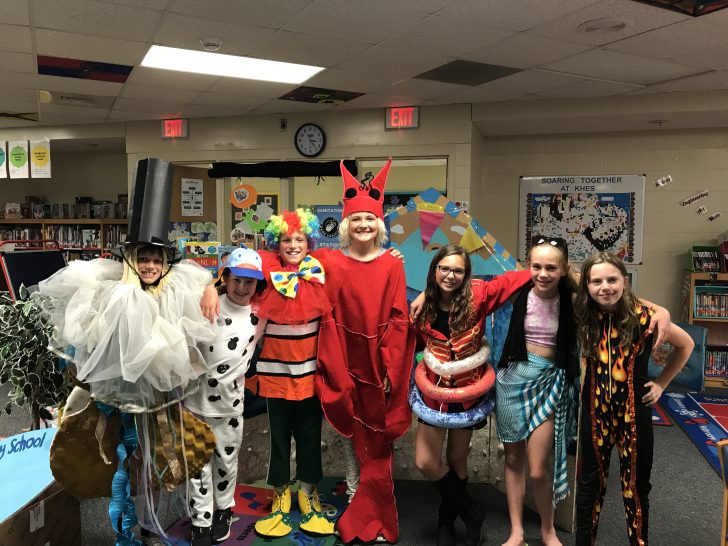 A team of seven Kitty Hawk Elementary School fifth graders will head to Iowa State University on May 25 to participate in the Odyssey of the Mind (OM) World Finals where the students will go up against about 150 other teams from across the nation and world in a competition that showcases their creative abilities to problem solve.

The students – Joe LoCicero, Wade Benton, Holden Hudspeth, Lars Lang, Kaitlyn Schwartzenberg, Quinn Wisecarver and Lily Casias – have been thinking outside the box since October. That’s when they first began working on the OM problem they chose for this year’s competitions — Life is A Circus.

The problem they were challenged with was to create a performance about a young person enjoying a regular life, but then waking up one day to discover being transported into a circus world filled with original animals performing tricks, a clown, circus acts and a ringmaster.

Their challenge – which concludes with the young person returning to the regular world believing it’s all been a dream until seeing a mysterious figure that turns out to be from the circus – is one of the five long-term problems OM teams could choose from this year to solve during their eight-minute performance.

Each year, teams choose a problem that focuses on one of five categories – vehicle, classics, structure, technical or performance. The KHES team chose the performance category, which is scored based on the creativity, quality, effectiveness and humor of the skit as it relates to the problem.

During the competition, in addition to the long-term problem they’ve chosen to solve, each team is also challenged and judged on how they solve a surprise spontaneous problem, which they can’t plan for, but will either be verbal, hands-on or both and must be solved in 10 minutes.

The team’s head coach, Elizabeth Hudspeth, said the group has grown tremendously since they began working together. “They really are a good group of kids,” she said. “They are creative, they’ve written a really good skit and they’ve done a great job. They’re hard workers and they’ve stuck with it,” she said.

All the hard work of the Kitty Hawk Team, coupled with their collective creativity, has certainly paid off.

The team placed top three at the Division 1 (3rd, 4th and 5th grade level) OM Regional Competition On Feb. 26 at First Flight Middle and High schools. They then went on to earn third-place honors overall and first in their performance category at the State Championship at Western Carolina University on April 2. Their April 2 performance positioned them to advance to the World Finals in Ames, Iowa.

According to its website, Odyssey of the Mind teaches students, from the elementary to high school level, how to develop and use their natural creativity to become problem-solvers. It was founded in 1978 by a New Jersey college professor who believed that learning should be fun, that students should incorporate their own interests, that there are always new uses for old items and the way you ask a question is everything.

For students who participate in OM, along with learning to tap into their innate creativity, other skills that are honed include public speaking, teamwork, time management, critical thinking and thinking outside the box to name a few.

“It’s been super fun and a great experience,” said Kaitlyn Schwartzenberg, who plays the ringmaster during the skit. “It’s fun being able to create and work on different things like makeup and art.”

Schwartzenberg also said that she has become more comfortable on stage.  “When we did our first competition, I was really scared to death. I thought, ‘What if I mess up or don’t remember something?’ But once you do it a few times, it’s much easier.”

For his part, team member Lars Lang said he’s enjoyed meeting new people at the competitions. And as for what he’s learned during the process, he said, “I learned to never give up on stage.”

The team is led by four coaches – Hudspeth, Cindy Benton, Felisha Lang and Jennifer Casias. While coaches are there to guide the students, OM coaches aren’t permitted to help the students with developing skits or making costumes, props or ideas. They can only ask open-ended questions that encourage them to think and problem solve for themselves.

“They are a great team,” Benton said during a recent practice. “They each have their strengths – some are good with the art piece of it, some are better at writing the skit itself, but they just have worked together and have become very close as a group. They are a very close-knit group.”

To learn more about the Kitty Hawk OM team or to donate to the team to help them go to the World Finals, visit khesodysseyofthemind.com.