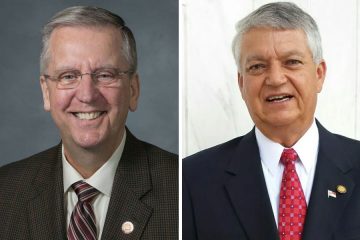 Two incumbent North Carolina State Senators, Bob Steinburg and Norman Sanderson, are competing in the Republican primary for the reconfigured District 1 State Senate seat that includes Dare County and contains constituents from both of their current districts.

Steinburg, an Edenton resident, is the current District 1 senator, as well as a retired businessman and member of the NRA and Ducks Unlimited. He is serving his second term in the NC Senate. He and his wife Marie have two sons and two grandchildren.

Sanderson, who lives in Minnesott Beach, has a half century of business experience in fields from law enforcement to childcare. Currently the District 2 senator, he has served for a decade in the NC Senate. He and his wife Linda have two children and three grandsons.

The Voice asked the candidates to identify the issues they think the voters in their district are most concerned about.

Bob Steinburg: Voters are concerned about the effects of liberal policies on their pocketbook, the liberal assault on Eastern North Carolina values, and the lack of confidence we have in election security thanks to liberal judges. Those judges have thrown out a common-sense voter ID, despite overwhelming support for a constitutional amendment. And nobody has fought more for election integrity…I’m one of two NC Senators and the only candidate in this race who signed the letter requesting a nationwide audit.

“With inflation and COVID-19 restrictions, Eastern NC families are hurting from big government – too much spending, too much regulation. I’ve fought to reopen our economy, to let kids come back to school without masks, and to make sure it never happens again. Gov. Cooper may think he’s king, but the constitution limits his powers, and I am fighting to help our region recover from Roy Cooper’s shutdown.”

The candidates were also asked to discuss the principal differences between themselves and their opponent.

Norman Sanderson: “Seniority (Next term will be 6th most senior member in Republican Caucus).

“Energy Policy – With the warnings coming from experts all across our country about potential electrical blackouts in the coming months, I believe we are trying to move too fast on replacing our current energy grid with alternative energy. We are eliminating nuclear power facilities and stopping natural gas exploration in our nation. We must have reliable and affordable energy sources. Wind and solar have come a long way but are still a long way from being able to meet the demands of our society. I think we have subsidized alternative energy for too long. If it is the energy source for the future, it is time it stands by itself. My opponent is one of the top supporters for alternative energy, especially energy from wind turbines.”

Bob Steinburg: “Liberal activist judges forced two conservative senators into the same district; Norm is a friend, and we will be friends and allies after this race. I’m running because we need a Trump Fighter in the Senate. I was honored to be recognized by my colleagues after the last election with the “Rocky Balboa” award for taking the Democrats best punches and walking away victorious. Here’s why that matters: we conservatives can’t back down when the liberal media attacks conservative Christian values. I will never back down to anyone in the fight for our state’s future. I will take the fight to them – and win the fight.

“In addition, I am the only voice for our region on the Atlantic States Marine Fisheries Commission, and our fishing jobs depend on a strong voice. If I lose this election, Governor Cooper will get the opportunity to add a liberal environmentalist to a lifetime appointment on this commission, which would be disastrous to our coastal economy.”

Bob Steinburg: “I’m honored to be endorsed by the Police Benevolent Association for my strong stand with law enforcement in these days of ‘defund the police’ and other terrible ideas. I’ve fought hard for prison reform to make sure our corrections officers receive the pay and resources they need to keep our communities safe, which helped me to earn the State Employees Association of North Carolina endorsement too.”

The candidates were asked to share something about themselves that they think voters probably don’t know, but should know.

Norman Sanderson: “My gifts are teaching and serving others. My joy comes from helping constituents solve their own problems. I am a strong Christian, a fierce conservative and a servant leader. I help lead two prayer caucuses that pray for our government leaders and all elected representatives.

Bob Steinburg: “I’m a Christian, conservative, and lifelong Republican – and I will not apologize or back down in the fight for those values. I’m a fighter, because the liberal “fake news” media and the big-city elites will run all over us if we don’t stand up and fight back. One of four children born to devoutly Christian parents, I learned the value of hard work at an early age from my father, who worked at the local newspaper, and my mother, who worked at a bank.”