WHAT TO WATCH ON TV
Stream On: Time to revisit ‘The Godfather’ (second of two columns) 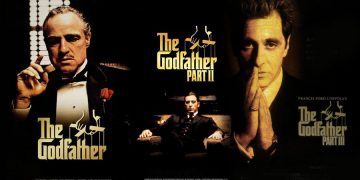 Last week I wrote about The Offer, the miniseries about the making of The Godfather, which has spawned several sequels, and looks to take on a life of its own, with TV treatments, “the making of” stories, music and even video games.

“I believe in America.”

If you haven’t seen it (or even if you have), The Godfather (1972), streaming here, is the film to watch after The Offer. The Corleone family at its center resembles the Karamazov family in Dostoevsky’s The Brothers Karamazov: a powerful father, Vito Corleone (Marlon Brando), an impulsive oldest son, Sonny (James Caan), a philosophical son, Michael (Al Pacino), a sweet-tempered son, Fredo (the great John Cazale, who only made five films, all of which were nominated for the Academy Award for Best Picture), and an adopted stepson, Tom Hagen (Robert Duvall, Open Range), who is maintained as an employee. Puzo opened the 1969 novel with an epigraph popularly attributed to Balzac: “Behind every great fortune there is a crime.”

Vito Corleone, since arriving in New York as a child from Sicily, has effectively been the godfather, or Don (an honorific used in Italy and elsewhere, meaning “head of the family”) to his community, still considered outsiders in 1920, who were ill-served by the police. He settled scores and presided over justice for his flock, and by 1945 is the head of a powerful “Mafia” family, so-called after the Sicilian Mafia organized crime syndicates, from which Vito himself had originally fled.

The quotation above is the opening line of the film. Amerigo Bonasera (Salvatore Corsitto) is petitioning Vito Corleone for justice after his daughter was assaulted, saying, “I believe in America. I raised my daughter in the American fashion; I gave her freedom, but taught her never to dishonor her family. She found a boy friend, not an Italian. She went to the movies with him, stayed out late. Two months ago he took her for a drive, with another boy friend. They made her drink whiskey and then they tried to take advantage of her. She resisted; she kept her honor. So they beat her like an animal.”[^]

We saw in The Offer that producer Al Ruddy struggled to get his movie made in the face of opposition by prominent Italian-Americans, who thought that it would promulgate negative stereotypes. But The Godfather is an aspirational, family-oriented film about your ancestors and mine, “men of honor,” Italian or not, who carved out of America a new life and continue to do so.

In The Godfather the baton is passed from the highly moral Don Vito, to his son Michael, an outsider to the family “business,” and at best amoral; a young man who acts in ignorance or defiance of tradition (an archetype we see repeated in Godfather III).

The Godfather: Part II (1974), streaming here, is one of the rare sequels considered better than the original film; the story of the new Don Michael Corleone’s expansion to Las Vegas and his attempted expansion to Havana are interspersed with and contrasted to the story of his father Vito’s (Robert De Niro) arrival in America, and how Vito set up his organization with his friends Peter Clemenza (Richard Castellano in The Godfather and Bruno Kirby in Godfather II) and Sal Tessio (Barney Miller’s Abe Vigoda/John Aprea).

The Godfather: Part III 1990 theatrical cut (not widely available) has gotten a bum rap from critics and audiences. Godfather II was an act almost impossible to follow, but Francis Ford Coppola did a pretty good job with this third installment. Michael, who has made a fortune, tries to make amends for his life of crime and finally go straight. Andy Garcia plays Vincent Mancini, Michael’s illegitimate nephew, a young hothead, who by helping Michael with old business, stands in the way of his rehabilitation. The same actors, 16 years older, play the roles of older but not necessarily wiser characters, with a plot that only verges on the outlandish. DVD/BluRays that are still available of the 1990 theatrical cut will not play on most DVD players sold in the U.S., U.S. Territories, Canada, and Bermuda. (See The Godfather Coda below.)

The Godfather Saga was a 1977 television miniseries that combined The Godfather and The Godfather Part II into one narrative that showed the events of the first two movies in chronological order, including outtakes from them and toned-down language for a network TV audience. It originally aired on NBC over four consecutive nights (one three-hour segment and three two-hour segments) in November 1977. Today this is almost impossible to find: Amazon has a listing for a VHS copy, which is “currently unavailable”; Amazon Prime lists it as The Godfather Epic (2016), but its page says “This video is currently unavailable to watch in your location.” Francis Ford Coppola went on record saying he did not like the films presented in this way, but in 1977, he needed the money to help finance Apocalypse Now.

And yes (sigh), there is a videogame. Perhaps now, lunchboxes and action figures? On a happier note, Marlon Brando parodied his role in 1990’s The Freshman (streaming here), with Bruno Kirby (Godfather II) and Matthew Broderick. Brando’s character, Carmine Sabatini, “looks like ‘the Godfather,’” several characters say, in a running gag.