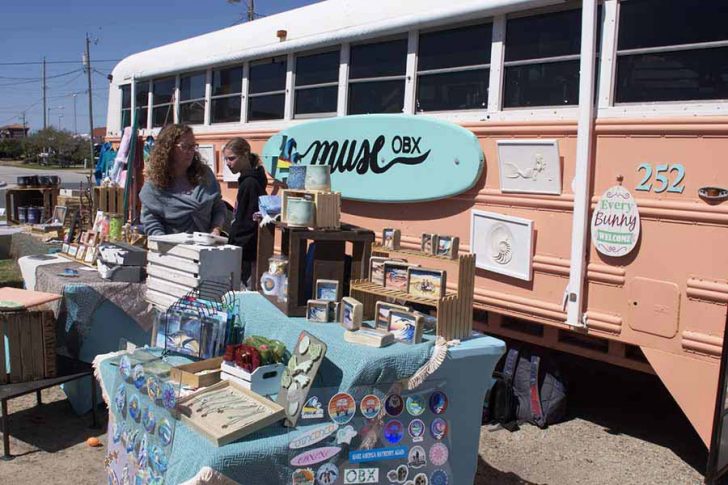 Ami Hill with her daughter at a Bus252 an April event at Jack Brown’s in Kill Devil Hills. (Photo by Kip Tabb)

Hoping to host a regular gathering of local artists at the Outer Banks Brewing Station this summer, Ami Hill, the owner of the Bus252 who sells art from her bright pink bus and organizes events for local artists, submitted a permit request for a variance of the Kill Devil Hills Special Permit ordinance in April.

At the May 25 board of commissioners meeting, citing concerns that it is a prohibited ongoing event as defined in the ordinance, the town commissioners unanimously rejected Hill’s request.

That decision is part of an ongoing disagreement and debate over whether the town’s restrictions on itinerant or temporary vendors is overly broad and, in some cases, counterproductive.

“I remain flabbergasted that they can continue grasping at justifications for an obviously flawed ordinance rather than admitting they’ve missed the mark,” Hill wrote, describing her reaction to the denial of her request.

Although itinerant vendors interviewed by the Voice for this article expressed frustration with almost every town in Dare County and the county itself, the complaints seem to focus mostly on the situation in Kill Devil Hills.

That town’s ordinance mandates that itinerant vendors can only operate at a special event for a charitable cause, and that “…100% of the profits realized by the permittee and vendors, after expenses, shall be donated to an organization that is recognized as tax-exempt and non-profit…” There is an exception to that rule, allowing itinerant vendors to operate at a profit between September 30 and May 1, although there are some restrictions on that as well.

In an email stating the town’s position, Guns wrote that the restrictions on peak-season activity for the itinerant vendors were in place “out of fairness for ‘brick-and-mortar businesses’ who are meeting Town site requirements and contributing to property taxes.”

Guns also stated that itinerant vendors “would be in direct competition with our existing storefronts with little to no overhead, no development standards and no contribution to property taxes, which is required of a brick-and-mortar businesses (including restaurants).”

But Hill says that the type of itinerant vendor events that she and her Bus252 can bring to a brick-and-mortar location represents an opportunity to increase their customer traffic and revenue. “It adds character to their business, and they also benefit from the traffic it brings in on a slow business time,” she wrote in the email.

For Outer Banks Brewing Station Managing Partner Tina Mackenzie, the term itinerant vendor used in the ordinance seems a misnomer. “They’re not itinerant…They’re all our local people,” she said.

In the ordinance, however, the definition of itinerant is, “Any person utilizing any cart, table, equipment, tent, or other apparatus, which is stationary, designed and intended so as to not be a permanent fixture on a lot.”

According to Kill Devil Hills Mayor Ben Sproul, that language and the ordinance has been a part of the town’s code for almost 20 years and was put into place because of complaints about door-to-door steak salesmen.

“These rules came into being for a reason,” Sproul stated. “We never try to get too broad or way out over our skis, for fear of…unintended consequences. You write it narrowly, so that the thing you want to be able to happen can happen…”

Still, some brick-and-mortar business owners that feel the restrictions are overly broad and fail to address their need to attract additional customers.

Sam Harriss and Alex Wolcott are part of the ownership team of Swells’a Brewing on the Beach Road. The business does not have a kitchen, a decision that was made to simplify their operation. The owners had hoped they could bring a food truck to their property, but they found that because a food truck is not a permanent fixture on a lot, they could not.

Eric Reece, one of the co-owners of the Outer Banks Brewing Station, pointed out that he can’t use his own food truck on his own property.

“A place like mine, at nine o’clock when I close down my food kitchen. If I could have that going in my backyard or in the parking lot…It shouldn’t be an issue,” he said.

But Planning Director Guns said there are other concerns about itinerant vendors operating at a restaurant or other business, writing that such a use “can increase the number of people in a single location by providing services for the permitted use and the itinerant vendor use. This can lead to over occupancy, parking issues, traffic control issues among other factors depending on location. Each situation or event varies, but these are concerns that have been expressed by police and fire.”

For her part, Harriss responds by asking how an itinerant event at a business creates more of a strain on public safety services than a 20-plus bedroom beachfront home.

“Their reasoning is that the fire and police forces are overwhelmed. For that I’m saying we have 70-person houses in a row across the street that bring in five different wedding vendors from out of our county every night,” he said.

The town has responded to some of the concerns of local itinerant vendors by creating their First Flight Markets at Aviation Park, operating this year from June 21-August 9 on Tuesdays. Guns noted that the events have been well attended and well received.

But for Hill, whose Bus252 does not meet the space regulations for the market, an option like that does not meet her needs as a business owner.

“I’m simply advocating for my business, my livelihood, and my family as well as for the right of every other local…artisan and bootstrap entrepreneur to have the opportunity to prosper in a way that works for them,” she wrote.

Sproul, who has been a Kill Devil Hills business owner for a number of years, says he understands Hill’s frustration.

“She has a lot of complaints, feelings about things that she feels are I think she used the word ‘unjust,’” he said. “That’s an opinion, but what can we do to make it better?”

“I get it. I remember being in her shoes,” he added, referring to an incident when a town decision restricted how much parking his business could have. “It ticked me off a bunch of ways,” he added.

Hill, who admits she is at times angry with her inability to operate in her hometown, also maintains that she is going to continue to fight for what she feels is a level playing field for herself and other artists.

“I’m not making progress,” she admits. “But…I’m not going let it stop me.”