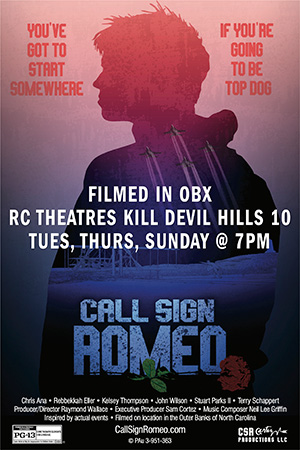 Filmed on location on the Outer Banks, the feature film Call Sign Romeo will be screening at RC Theatres Kill Devil Hills 10 through Labor Day weekend, on Tuesdays, Thursdays, and Sundays at 7:00 PM.

“We set out to make an entertaining, family friendly movie filmed in the Outer Banks, and based on audience demand for the film, I believe we have accomplished that goal,” says Executive Producer Sam Cortez.

Call Sign Romeo features the character Chris Torres, an athletic, smart solo act whose application to the US Naval Academy is rejected. The only way in, according to the Navy Wrestling Coach, is for Chris to win the State Championship.

With touches of The Karate Kid and Top Gun, Chris must overcome the challenges of his senior year, including his girlfriend going to West Point, a nemesis they call Kid Hulk, Navy SEAL trainers out to test him, and a teammate that antagonizes him at every turn.

“The story is inspired by actual events,” according to Mr. Cortez, “a lot of the things that happen in the film happened here in the Outer Banks when the local high school wrestling team made a run at the State Championship.”

Rated PG-13 for some thematic elements and language, the film is filled with positive messages about perseverance, anti-bullying, girl power, and teamwork, and is a story that the whole family can enjoy.

The film can be seen on Tuesdays, Thursdays, and Sundays at 7:00 PM at RC Theatres Kill Devil Hills 10 beginning June 5. More information about the film and how to purchase tickets in advance can be found on the film’s website, www.CallSignRomeo.com