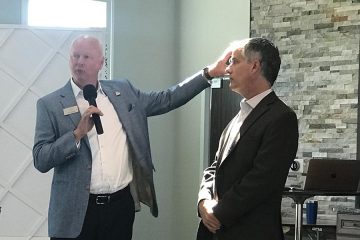 About 60 people gathered for a June 6 public meeting in the Keeper’s Galley Building at Haven on the Banks to hear the details of the proposed $18 million event center that is planned for the Soundside Event Site in Nags Head.

The center, which would be located in the northeast corner of the site, would be approximately 48,000 square feet in size and include an event hall, meeting room, a catering and training kitchen and a lobby. A boardwalk is also being constructed along the soundside as part of the project.

Outer Banks Visitors Bureau Executive Director Lee Nettles, along with Dare County Tourism Board Chair Tim Cafferty, made the presentation that lasted about an hour. The re-imagined conceptual plan comes after years of considering potential development options at the event site – including at one point, a hotel and convention center which are no longer being considered.

The site currently hosts a number of popular events, including the Outer Banks Seafood Festival, but it is largely seen as underutilized.

Nettles told the attendees that he envisions the center will have more of a civic center type feel than event center and would be roughly the same size as the Publix market in Kill Devil Hills. The facility would have the capability of housing three basketball courts, and would also be able to host pickleball, volleyball, indoor soccer, wrestling, gymnastics and cheerleading events as well as concerts, trade shows and other events. 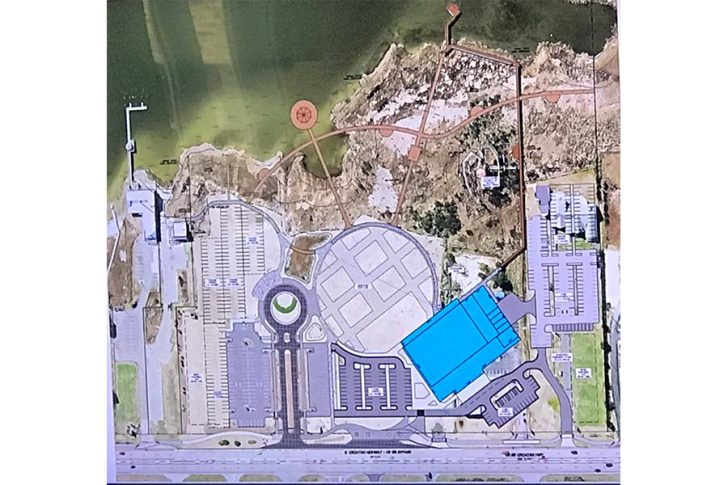 “The reason that the Tourism Board exists is for the support of year-round tourism, and this building is intended to address that,” Nettles pointed out.

With a 2,800-square-foot training and test kitchen, Cafferty said officials also envision that the center could potentially serve as a culinary training center. Features such as air walls that could be collapsed and moved around to accommodate specific events would make the space a versatile one.

Nettles, who noted during the presentation that the target crowd size for events is between 300 and 2,500 people, added that he sees the center as an extension of the Dare County Parks and Rec facilities.

The plan still has several hurdles to clear to move closer to reality — including requiring the Nags Head Board of Commissioners to approve amendments or variances to its zoning ordinance related to height limits and parking. It will also require state permits related to wastewater.

“I think if everything worked out great, we’re still three years from anything coming out of the ground,” Nettles said in regard to a construction timeline.