How one book disappeared from Dare school libraries 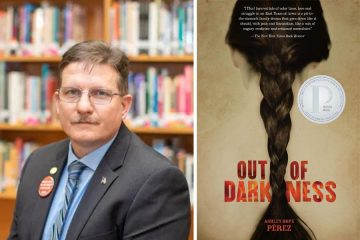 Education Board Member Carl Woody’s complaint led to the removal of Out of Darkness.

In November 2021, print and digital copies of a 2015 historical young adult novel, Out of Darkness by Ashley Hope Perez, were removed from Dare County Schools high school libraries. The book has remained off the shelves since.

The book was removed by Dare County Schools Superintendent John Farrelly after Board of Education Member Carl Woody asked him to do so, according to Woody and Assistant Schools Superintendent Keith Parker. There was no review process nor any formal approval by the board of education, although Parker said the board “supported” Farrelly’s decision. (Farrelly is currently on leave until the end of this month at which point his resignation as superintendent becomes official.)

“My concern was the inappropriate sexual content and so forth that were in it, and then [Farrelly] reviewed it and took it off the shelf,” Woody told the Voice. “In a typical review, you know, somebody fills out the paperwork, sends it to the school, the school has a committee or forwards it to the district office to review. This one was a little bit different, just because it had strong sexual content in it that wasn’t really needed to be in the public-school setting.”

Out of Darkness focuses on the relationship between a teenage Mexican American girl and teenage African-American boy in the segregated town of New London, Texas in the 1930s, just around the time of the 1937 New London school gas explosion. Perez’s book has earned a number of recognitions, including the School Library Journal Best Book of 2015.

Whatever one’s view of the book, the handling of Out of Darkness raises questions about the Dare School District’s policies for banning books from library shelves — and whether those policies were followed — at a time when the impassioned and polarizing debate over school and library books has intensified throughout the nation.

The only public mention of the book’s removal that the Voice encountered was on the website of the group Dare To Share — which has engaged in a campaign of protests and allegations over school curriculum and policies. The group offered “a special thanks to Carl Woody for taking the initiative to have this inappropriate material removed in all forms from every DCS library.”

The Dare County Schools does have a stated policy when it comes to decisions about whether to pull books off library shelves. Board of Education Policy 3210 Parental Inspection and Objection of Instructional Materials requires that parents or community members that have objections to materials make a formal request to the principal of the school.

“The principal shall establish a committee to review the objection,” the policy reads. “While input from the community may be sought, the board believes professional educators are in the best position to determine whether a particular instructional material is appropriate for the age and maturity of the students and for the subject.”

During a presentation at the November 9, 2021 board of education meeting, Farrelly reviewed the policy, noting that the review process begins with a parent or community member filling out a form called “Request for Reconsideration of Works.”

At that point, according to the presentation at the meeting, a committee at the school level would be formed to review the material. That committee, he said, would include the school librarian, principal and the instructional technology facilitator in that school as well as a teacher and a parent. If a parent is not satisfied with the committee findings, they can then appeal to the superintendent, who would form a district-wide committee to review the request. If the parent is still not satisfied with that district-wide committee’s response, they can appeal to the superintendent and then finally, to the board of education.

“I know that we’ve had some requests, particularly around books, and I think it’s important to know that the district does have a policy and a very comprehensive set of action steps that can be taken,” Farrelly said during the November meeting presentation.

But in the case of Out of Darkness, no formal complaint was made, as Assistant Superintendent Parker confirmed to the Voice. He also said that there is no separate policy for a school board member when it comes to filing an objection.

As it stands now, no committee has been formed and Out of Darkness has yet to be reviewed. Parker said that if an official objection is received, the formal review process will begin at the school level.

“If there is no official objection received, it will be placed back in circulation by the start of the next school year,” he added. He also said the district has not received any other formal requests to have books or materials reviewed, and no other books have been removed or are in pending status.