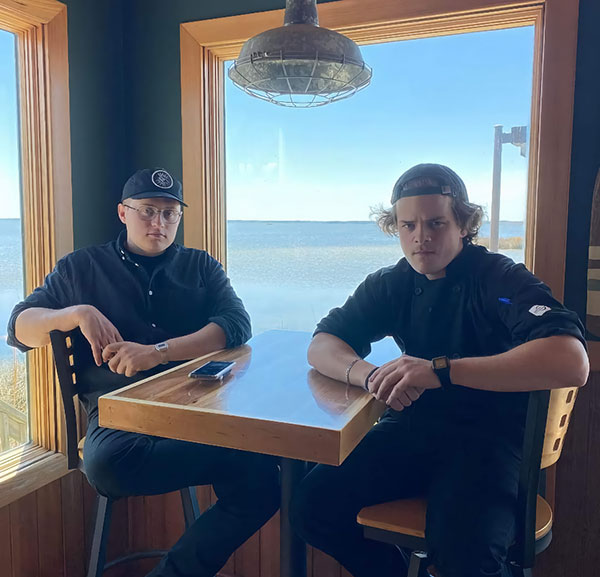 Jean-Marc Berruet (left) and his younger brother, Sebastian are carrying on a family legacy. (Photo by Kip Tabb)

At 24 years of age, Jean-Marc Berruet, the new owner of the Paper Canoe in Duck, is perhaps the youngest restaurant owner on the Outer Banks.

Little has changed at the soundside restaurant at the north end of Duck that had been owned for 12 years by local restaurateur Tommy Karole. Opening for the season in April, new owner Berruet isn’t planning on introducing a radically new menu or new ways of preparing food. In fact, the menu and the preparation of the food is very much what his father, Marc-Jean Berruet, created for the Paper Canoe when he reigned as the restaurant’s chef from 2013-2017.

For Jean-Marc, being in the kitchen is very much part of a family legacy and tradition. But it is a complicated legacy that Berruet is still struggling to reconcile a year after this father’s death.

“He had a drug problem,” he said of his father. “That kind of inflames issues.”

Going back another generation, Jean-Marc’s grandfather, Jean-Charles Berruet, was an internationally acclaimed chef at the Chaunticleer on Nantucket, a restaurant that Berruet describes as “a really serious, super-hardcore French restaurant that was there for [more than] 30 years. The waitstaff wore tuxedos, they had 1,500 wines in the wine list, 40,000 bottles of wine in the wine cellar…”

For Berruet’s father growing up on Nantucket, family life was complicated. “He had a difficult relationship with his father,” Jean-Marc said. Over time, though, Berruet’s father became a true French chef, someone who understood to a remarkable degree how to prepare food.

Regardless of the complications in his life, Jean-Marc said his father “was a legit, professional, trained chef. He knew an incredible amount of information about food and the preparation of food.” And his father was already well-known in Outer Banks restaurant circles before he became the Paper Canoe chef. After the Chaunticleer closed in 2004, he moved to the Outer Banks, opening the Pearl in the Sea Ranch Hotel.

Although the food and service were excellent, ultimately it was not a good match for a hotel that needed breakfast service for its guests and a more basic fare. “It was in a hotel, and the hotel wanted it to be different,” Jean-Marc explained.

The family moved to Florida to open a restaurant, but after two years, following the failure of that venture, they moved back to the Outer Banks.

The Paper Canoe had opened in 2010 and was holding its own. But there were issues with the chefs. One of them walked out over a holiday weekend in 2013. Karole needed someone immediately and an employee who was a longtime friend of Berruet’s father suggested he give him a call.

“My dad and Tommy hit it off,” Berruet recalled.

Karole agrees. He remembers that first meeting with Marc-Jean, and how he subsequently transformed the kitchen over time.

“I gave him the whole menu, and I thought he was going to be, ‘I want to do my own menu,’” he said. “And there are a couple of dishes on there that was his. But not really. He would just make it great…”

The second year Marc-Jean was the chef at the Paper Canoe, in September after the exchange students have gone home, the restaurant was still busy. He asked his son if he would like to bus tables and run food. The following year, his father asked if he wanted to come back.

“I’m 15 and I don’t have anything going on,” he recalled. “I grew up in restaurants so it’s comfortable.”

Jean-March spent the summer doing much the same work he had done before, bussing and running food. The following summer, 2016, he began doing prep work on the food line, “helping out on maybe the salad or the appetizer station, stuff like that…” By 2017, Jean-Marc said he was taking on more responsibility as his father’s personal struggles continued.

Over the next four years, he continued to work in the Paper Canoe kitchen, working with different chefs and honing his skills.  By the summer of 2021, “I’ve kind of done everything in here,” he said.

At the end of that summer, Karole, who had opened the Pony and the Boat in Kitty Hawk in the spring of 2021, told the Berruet he was going to sell the Paper Canoe. The twenty-something who had grown up in the restaurant knew he had to buy it.

The new owner plans no significant changes. The core staff, many of whom have been at the Paper Canoe for more than five years, are still there and nothing has changed in the dining area.

Perhaps the biggest change is that the menu will go back to what Berruet’s father, Chef Marc-Jean, created.

His father kept notebooks on what he would prepare every day. The son has found two of them and is using them to guide him.

“He could be really intense, and he was very creative,” Jean-Marc Berruet said, adding. “I’m not saying I’ll ever get to that point right now.”