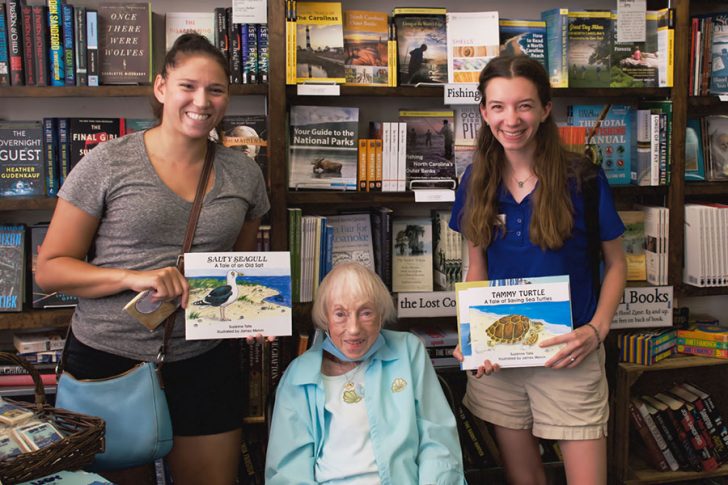 Suzanne Tate has never written a book quite like Crabby Lady Looks Back.

The 35 books in her Nature Series and three books of the History Series are children’s books. Meticulously researched by Tate and beautifully illustrated by local artist James Melvin, they have been a part of bookstores, museum stores and gift shops on the Outer Banks and even nationwide, since Crabby & Nabby: A Tale of Two Blue Crabs was first published in 1988.

There are also her three oral histories. Bring Me Duck: Folk Tales and Anecdotes from Duck, NC., Memories of Manteo and Roanoke Island, N.C., and Logs & Moonshine: Tales of Buffalo City, N.C. Those books are a tribute to Tate’s training as an anthropologist and historian.

And at her Very Crabby Party on June 15 at Downtown Books in Manteo, Tate’s influence across generations was apparent.

Coworker Stephanie McQuade was there with Arencibia, although she had the day off. “My boyfriend’s mom read them to him as a child,” she said. “He was really excited when he heard about [the Very Crabby Party]. He told me, ‘You have to get Salty Seagull so we can read it and give it to my mom.’”

There were parents with grown children, and grandparents, young adults and some children, stopping by to thank Tate for her books and what they had meant to them.

But Crabby Lady Looks Back is different. This is Suzanne Tate speaking to an adult audience, using her own words to describe a life filled with joy, laughter and excruciating loss and heartache. It is not a long book at all — just 24 essays. But those essays chronicle a remarkable life.

What emerges from the pages of the book is a woman who, from her earliest memories in one of the shorter essays, An Independent Streak, was determined to go her own way. That independent streak is perhaps most apparent when she decides after her sophomore year at Muskingham College in her native Ohio to head off to the University of New Mexico where she hoped to study archeology.

“I was afraid to tell my parents that I had enlisted in the United States Naval Reserve. The year was 1952.” she wrote. Recruiting her brother-in-law to break the news to mom and dad, she soon got a telegram, reading “Steer your course homeward, Port open.”

There is more to that story, however. In an interview, Tate mentions why her parents were so understanding. She has a trove of letters between her parents Bob and Grace Rucker. When the United States entered WWI in 1917, her father enlisted in the Army.

“I was …reading his letters and in one of his letters, he said, ‘I must tell you, Grace, that I enlisted in the Army today. You know I didn’t tell my parents,’” Tate recounted, adding that “They didn’t confess that to me.”

It was in the Navy that Tate met her husband, Everett. In the essay Shrimp Boat Daze, she writes with joy, humor and remarkable clarity about meeting him, falling in love and in later essays, sharing a life together. But the essays are not all filled with joy.

One Last Kiss recounts the death of her husband, as she writes unflinchingly of the stroke that led to his passing and what it means when “Everett, husband and lover for 54 years, is no longer a part to my life.” She ends, though, on a note of hope and resilience, finding the “strength to go on without him.”

That same need to be resilient is found in what is perhaps the most difficult essay to read, not because of style, but because of content.

“The worst thing is to lose a child,” she writes in Loss of a Child. “It is the most impossible, unfathomable, unacceptable event in a parent’s mind. But in real life, the loss of a child does happen. And one must find a way to cope with it or die also.”

There are two essays about her son, Frank, who died at age 19 when driving home from college. Loss of a Child describes how Tate dealt with the loss of her son; Remembering Frank is a poignant and beautiful description of a life that ended too soon.

It is perhaps in writing about Frank and how she was able to come to terms with it, that led to her putting her essays about life together in a book.

“I wanted (people) to find some help like in the Loss of a Child,” Tate said. “That’s one that I’ve been, for quite a number of years, taking that essay to someone I know who has lost a child and they say that it helps them.” 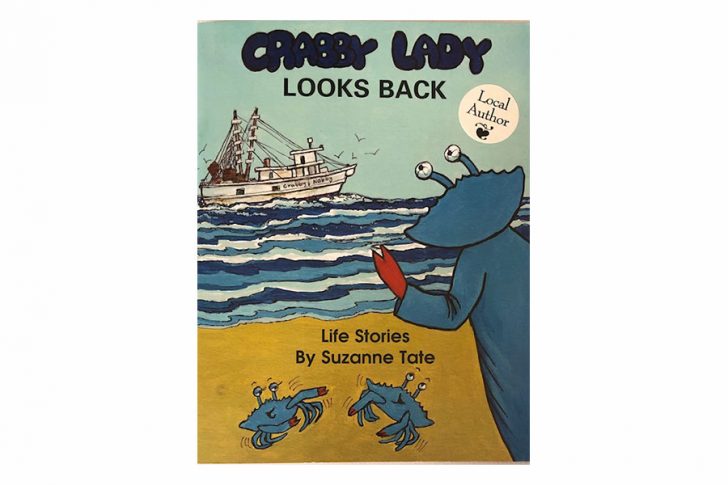 There is also the realization that she may not be able to create a book like Crabby Lady Looks Back much longer. Now 92 years of age, her eyesight is failing her.

“One of the reasons that I was so anxious to get this book out right now is because I’m losing my eyesight to AMD, age related macular degeneration,” she said.

Whatever the reasons for writing the book, Crabby Lady Looks Back is the work of a master storyteller reflecting back upon her life and sharing it with her readers.

“I want people to get it get pleasure out of reading, but also I wanted to inspire them or help them if they were having some problems,” she explained.