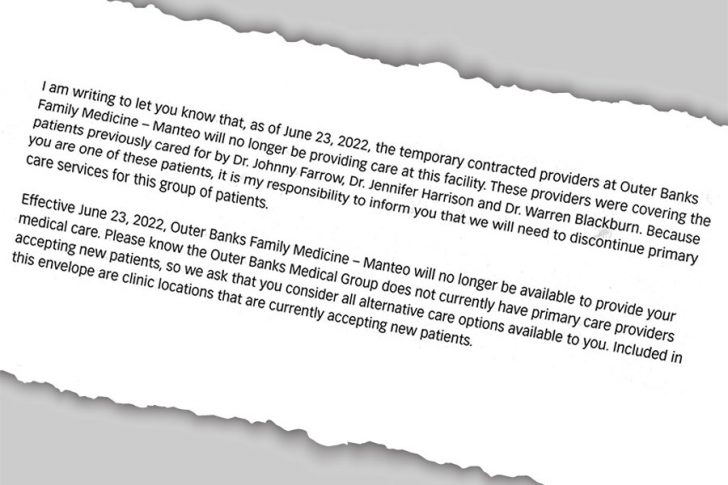 Manteo residents John and Pam Buscemi have been patients at what is now Outer Banks Family Medicine-Manteo for the past 35 years. But as of June 23, they and more than 2,400 other patients currently being served at the practice will be forced to find a new primary care physician.

The temporary providers were covering patients previously cared for by Dr. Johnny Farrow, Dr. Jennifer Harrison and Dr. Warren Blackburn. Farrow and Harrison are now working at the newly opened Surf Urgent Care in Kill Devil Hills, and Blackburn has since retired.

That May 23 announcement left the many affected patients searching for care. “We had to scramble to find a doctor,” explained John Buscemi, adding that they eventually found one in Creswell, N.C. From their home, it’s just shy of an hour’s drive.

Added Pam Buscemi: “It’s just a very sad situation considering we live in Dare County, one of the richest counties in North Carolina, and our hospital system cannot provide a doctor…I don’t get it.”

A week ago, Dr. Gary Hunter, chief of staff at the Outer Banks Hospital penned an op-ed column calling the shortage of healthcare providers a “crisis,” and discussing the “unique challenges” facing the Outer Banks.

“When you couple the growing need with both the high cost of living and the serious lack of housing on the Outer Banks, it underscores the difficulty of attracting and retaining both permanent and temporary physicians, nurses and technicians,” he wrote. “These are complicated issues with no quick or easy solutions.”

In an email to the Voice, Outer Banks Hospital Senior Administrator of Operations Amy Montgomery stated that, “According to the Association of American Medical Colleges there will be an estimated shortage of between 37,800 and 124,000 physicians across the nation by 2034…As a result, health systems are competing for a small pool of providers or are having to rely on temporary contracted healthcare workers, which is not sustainable.”

Montgomery added that “The Outer Banks Medical Group is doing everything we can to restore and even expand primary care access locally. It will take time.”

For the patients interviewed by the Voice, it hasn’t been an easy task finding a primary care physician, and in most cases, they will need to travel an hour or more to see their doctor.

Some of those who spoke to the Voice have found providers, some are still looking, and some are waiting to hear if other out-of-town providers will accept them as patients pending a review of their medical records.

For Wanchese resident Courtney Quillin, a former patient of Dr. Farrow, a new primary care physician for her and her son will mean a lengthy trip to Elizabeth City, where she has been able to secure a provider.

“When I read that letter, to be honest, I was in shock,” Quillin recounted. “And I just think how sad it is for the elderly who are really really sick and need the care…how are they going to get to Elizabeth City, most of them don’t even have cars at this point. So it’s definitely a mess.”

One patient interviewed by the Voice, who is in his 80s and asked not to be identified, was able to find a doctor in Moyock, but can’t be seen until November. “That’s not a good thing,” he said, “that’s a chore just to go to see your doctor.”

Manteo resident B.B. Walden, another affected patient, said she felt like she was “just throwing a dart” when it came to her search for a new primary care physician. “It’s just rather shocking,” she said, adding that she was lucky enough to be able to find two doctors [in Elizabeth City] who were accepting new patients.

“At least I have an appointment and I’m capable of doing it,” Walden said. “For a lot of people it’s a big deal to get there. There are people, who as of June 23, won’t even be able to get a prescription filled anymore and for some people who don’t have any recourse, it’s just really distressing.”

Walden also voiced concern about the inadequate medical care coupled with the growing population on the Outer Banks. “More and more development, affordable housing, a new college, but not anywhere near enough basic medical infrastructure,” she asserted. “And it seems one will have to travel quite far to find a medical practice that will accept new patients.”

Manteo resident Donnamae Morrisette is still uncertain about who will be the primary care provider for her mother, who she said is in poor health and is currently a patient of Outer Banks Family Medicine-Manteo. While Morrisette has had her mother’s and stepfather’s medical records transferred to Chesapeake Regional Medical Care, her care isn’t guaranteed pending the review of their records.

As for the number of people affected by the provider shortage at the Manteo practice, Morrissette said, “It’s a lot of people…we are a remote island and an hour to an hour and a half away from the physicians they’re recommending people call. And there is a mad dash to secure them, so they’re overwhelmed.”

Morrisette has contacted Outer Banks Hospital officials as well as county commissioners in the hope of organizing a community forum on the state of healthcare in Dare County. But so far, she said, no one has been receptive to the idea.