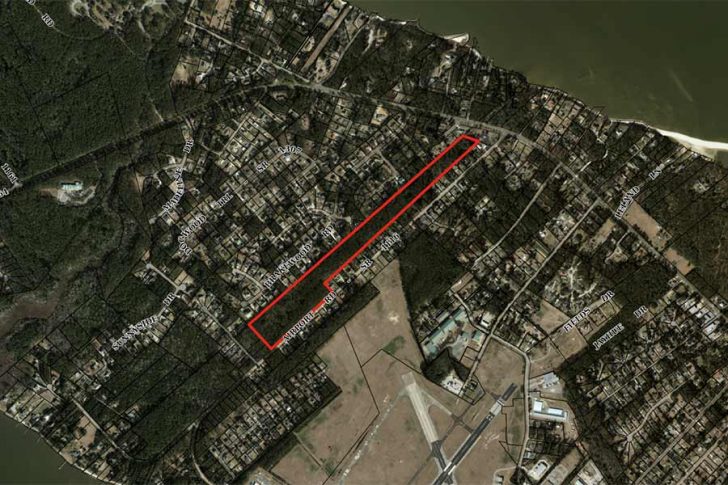 Some neighbors are opposed to the site of the Roanoke Island housing development (maps.darecountync.gov)

Plans for a 56-single family home development off Airport Road on Roanoke Island have neighbors concerned and speaking out about the potential impact on traffic congestion, public safety, the environment and flooding. But what they can do about it seems limited.

More than a half dozen residents spoke during the June 21 Dare County Board of Commissioners meeting to voice objections to the proposed subdivision for the 25-acre parcel formerly known as the Evans tract. The site, owned by Old North End, LLC., is situated between the existing Brakewood, Daphne Park and Evansville subdivisions.

The parcel is zoned R-1 Low Density Residential and will be accessed via Airport Road and Culpepper Street. Culpepper Street is currently undeveloped, but will become an improved 20-foot-wide paved road. Currently, Airport Road is dotted with residential homes, some built in the 1940s and 1950s. The two-lane roadway also serves as the only access to the N.C. Aquarium, the Outer Banks SPCA, Dare County Airport and the Dare County Emergency Operations Center.

Rita Webb, who told the commissioners on June 21 that she bought property on Airport Road in the mid-1970s to build her dream house, summed up the speakers’ sentiments, saying, “The conditions of Airport Road have rapidly deteriorated in the last few years…and we are going to take down trees and jeopardize wildlife habitat and put in 56 more septic systems, which I think is a pollutant.”

Old North End, LLC, whose members are listed as local attorney Jeff Malarney and Derek Hatchell of Hatchell Concrete, received a two-year preliminary plat approval for the subdivision in December from the Dare County Planning Board. According to County Planning Director Noah Gilliam, the two-year period commences once developers have secured all necessary permits from state and federal agencies.

At that point, Gilliam said, Old North End, LLC must have all improvements completed, such as stormwater management systems and roadways, before it can apply for final plat approval and have the lots recorded.

Some members of the neighboring community have been speaking out at meetings for several months, but the June 21 meeting attracted the largest number.

One such resident, Kathy Meekins, told the commissioners that the NC Department of Transportation needed to conduct a traffic study before the development moved forward. “If you can’t improve that road, then you can’t, in good conscience, allow that development to go in,” she said. “And when you have 56 homes with septic, and you have water trying to come up with waste trying to go down, I’m not an engineer, but that doesn’t sound very good to me.”

Elizabeth Granitzki said she was born on Airport Road 62 years ago.

“I know for a fact that during World War II, Airport Road was built exactly one mile long for extra airplanes, so it’s a historic landmark,” she said during the meeting. “The forest that we’re referring to, the 56 acres, is the last large group of trees of the maritime forest [on the island]. And if we could go digging there, we could probably find anything from Indian relics to World War II stuff.”

Kathryn Fagan told the commissioners there was a common thread to the comments being voiced: “Greed is ruining what we have. This development will result in so many problems and so many unhealthy results.”

Fagan — who said the tract was part of a migratory bird path and home to many wildlife species including eagles, bluebirds and owls – asked that the county pursue other avenues, such as possibly pursuing grants for land acquisition in an effort to preserve the forest. “The best settlements are win-win,” she said

Kathy Mitchell, who has lived on nearby Gareth Circle for 34 years, told the commissioners she’s witnessed “a tremendous loss of natural areas and disturbing changes in land use practices in Dare County. Before too long, we will be down to the last few slivers of buildable land on the Outer Banks, and the definition of buildable seems to be changing rapidly, too.”

Speaking to Fagan’s remarks after the public comment period ended, Dare County Manager Bobby Outten said that under state law and the county’s subdivision ordinance, the county was not required to provide public notice regarding the subdivision application – and had no other option than to approve the preliminary plat if it met the requirements of the ordinance.

In a later interview with the Voice, Planning Director Gillam added, “If your preliminary plat layout meets these requirements [of the subdivision ordinance], and you can obtain the required state permit, it’s approved. And it’s up to the developer to install [improvements] in the two-year timeframe.”

Gilliam added that after that timeframe, any building permit or development of the lots would be handled through the zoning and building permit review process. “If they decided they were going to retain the property and then build a house on each individual lot, they would certainly be in their right to do that. Or they could sell the individual lots, and whoever buys the lot could develop it.”