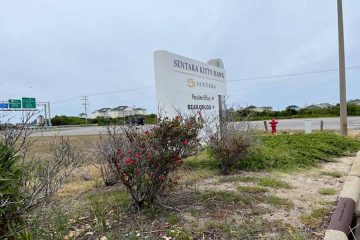 Pasquotank County has received a $4.5 million dollar offer from a housing developer to purchase the Kitty Hawk property it owns at 5200 N. Croatan Highway that was formerly the Sentara Medical Center. And while that deal requires additional steps before being consummated, the town of Kitty Hawk, which offered $2.7 million for the property, appears to have fallen short in its effort to buy it.

Pasquotank County Attorney Mike Cox said the plan submitted by the housing developer, the Charlotte-based DPJ Residential, calls for at least 225 market-rate multi-family units to be built on the 6-acre site.

According to Cox, at this point the county has received a “letter of intent” to purchase the property by DPJ. He said the process could move forward if the Pasquotank Board of Commissioners approves “the concept and the contract” at its July 11 meeting. One twist to any potential sale is that is being conducted under an “upset bid” process that could allow another entity to outbid DPJ.

For his part, Kitty Hawk Town Manager Andy Steward told the Voice that the DPJ “offer on the table would require a zoning change,” adding that the town and its residents would “have a voice” concerning such a zoning change.

In a statement issued by the town, Stewart stated that it “has been in discussion with Pasquotank County to purchase the former site of the Sentara Medical Center…Sentara Regional Medical Center vacated the property in 2017 as the building needed extensive renovations for the building to continue to operate as a medical facility. The property is located in the Emergency and Governmental Services District which allows for hospitals, medical centers, Town owned or leased facilities, and State-owned facilities.”

The statement also said that if the site were purchased by Kitty Hawk, one potential use would be a new police station, something that “could be a savings to the taxpayers and be a more expedient option,” for the town’s new public safety facility.

“The Town understands well that Pasquotank County must be responsible to its taxpayers but must also take into consideration the current condition and zoning of the property. The property would need to be thoroughly inspected to ensure its safety for occupancy and to ensure that renovations do not exceed the benefits of constructing a new facility,” the Kitty Hawk statement continued.

As to the ownership history of the property, Sentara moved into that site in 2014 as part of a deal with Pasquotank County that included several local medical practices and Albemarle Hospital in Elizabeth City. Cox explained that Pasquotank had operated a county hospital that and bought up tracts of land in surrounding counties for medical facilities and Sentara leased the Dare County property from Pasquotank County.