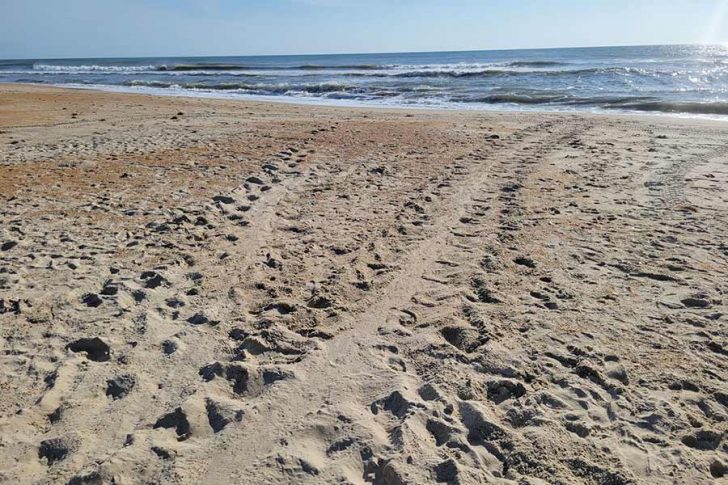 Turtle nesting season is well underway along Outer Banks beaches and to date, the number of nests has increased compared to this time last year, according to officials with the Network for Endangered Sea Turtles (N.E.S.T.) and Cape Hatteras National Seashore (CHNS).

N.E.S.T President John CeCe said, however, that it’s too early to tell if this will be a stellar season for sea turtle nests.

“It’s anybody’s guess as to what’s happening…whether everything is moved up a week or two, or this could just be a big season for us,” CeCe noted. “There’s no way to predict.”

As of June 22, there were 12 active nests and 11 false crawls in the N.E.S.T. coverage area which spans from South Nags Head to the Currituck Outer Banks, CeCe told the Voice. At this time last year, there were four nests and one false crawl. A false crawl occurs when a female sea turtle drags herself up on the beach to nest, but for a variety of reasons, doesn’t lay eggs.

Within the Cape Hatteras National Seashore, there are 117 nests recorded along with 81 false crawls as of June 23. Last year at this time, there were 94 nests and 70 false crawls. Nesting season typically stretches between mid-May and mid-September each year.

CeCe said that in the N.E.S.T coverage area, the majority of nests this season have been up in Southern Shores, where there were no nests last year. Because of dredging due to beach nourishment efforts this year, one nest in Nags Head and four in Southern Shores have required relocation, he added.

There are a number of reasons why a false crawl can occur, CeCe said. “It could be that the sand is too hard, the sand is too soft, a noise or something spooks them. But for whatever reason, she just decides that at that particular place and time, she doesn’t want to lay her eggs, turns around and goes back into the water.”

Nesting turtles, according to information provided on the CHNS website, can become disoriented or stressed by flashlights, loud noises and pets. Officials also urge beachgoers to not leave items on the beach overnight so there are no obstacles for nesting sea turtles.

“Obstacles in the way of a nesting sea turtle could injure her or cause the nest to be laid below the high tide line, where the eggs may be washed away,” the website read.

CeCe added that holes dug in the sand and left overnight also pose a risk to volunteers monitoring the beaches for nests early in the morning. “We’re right behind all of the towns asking people to fill in their holes…it’s definitely a hazard for our ATV drivers.”