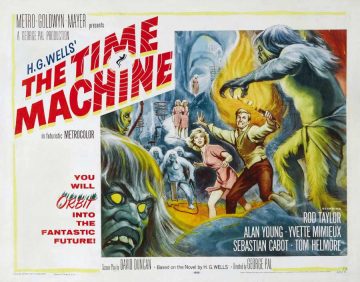 “The Time Traveller (for so it will be convenient to speak of him) was expounding a recondite matter to us. His pale grey eyes shone and twinkled, and his usually pale face was flushed and animated…. he put it to us in this way—marking the points with a lean forefinger—as we sat and lazily admired his earnestness over this new paradox (as we thought it) and his fecundity.” (H.G. Wells, The Time Machine)

From H.G. Wells’ 1895 story to Kurt Vonnegut’s 1969 novel Slaughterhouse-Five and beyond, time travel has been an enduring subject for fiction. In 1960 George Pal directed a large-screen adaptation of Wells’ story, and in 1979, novelist and screenwriter Nicholas Meyer directed what might be considered its sequel, in which H.G. Wells chases Jack the Ripper into 1979. Fasten your seatbelts!

In 1960 George Pal’s The Time Machine was marketed as a big deal, on the order of epics such as David Lean’s recent Bridge on the River Kwai, and it was … bombastic—splashy and colorful, even if the acting was self-conscious and rote. The audiences were there for the special effects, and Gene Warren and Tim Baar did win the 1961 Academy Award for those. It made for a special trip to the movies for families steeped at home in The Wonderful World of Disney and The Twilight Zone.

Adapted from H.G. Wells’ 1895 novella, The Time Machine received mixed to poor notices from journalists looking for high art, who missed the point, which the British Film Institute’s Monthly Film Bulletin picked up on: “Pal’s visual flair and genuine feeling for his fantasy world help to maintain an entertaining surface for most of the time.”

It opens as a Victorian salon-ful of English types, including Sebastian Cabot, await their host, who had promised to meet them there. The set is impressive, dark wood, leather and brass, with clocks everywhere, all ticking like so many cicadae as the gentlemen wait.

Alan Young’s presence—a Canadian-American with a bad Scots accent, he had been a fixture on American TV since 1950 (and in 1961 would co-star in a sitcom with a talking horse), and that of leading man Rod Taylor, who was Australian, but seemed thoroughly American, didn’t bode well for the film. A glimpse of the true star of the movie came when the “time traveller,” known as “George,” and listed in the credits as “H. George Wells,” showed a small proof-of-concept model of his machine to his friends. It was so small that the only moving part could have been the spinning dish behind the pilot’s seat, but in the film, it’s a fully working time machine, that disappears when Sebastian Cabot pokes it.

Its titular full size counterpart, when revealed, looked like a Volkswagen-sized steampunk fanboat, which didn’t move across swamps, but rather in the fourth dimension. (The prop, or a replica, which I think unlikely, showed up in a 2008 episode of Big Bang Theory as a Hollywood collectible that becomes the stuff that dreams are made of.) When George pilots it into the future, the special effects are indeed Oscar-worthy, as we see, around the stationary machine, swirling history in the form of seasons, wars, and succeeding civilizations. In the future George becomes involved in a frankly ludicrous plot, which in Wells’ 1895 story was dressed up by his florid prose, even with a subtext of clumsy social commentary, but on film, even as long ago as 1960, fell between the stools of children’s and adult entertainment. The journey really was the destination.

There’s also no notion of the butterfly effect of chaos theory, which posits that small changes made in the past would wreak unforseeable changes in the future, the modern point of time-travel tales, which is at the center of stories like 11-22-63, and of which Wells probably had no idea. But put yourself in the sneakers of a ten-year-old and prepare to be thoroughly entertained. 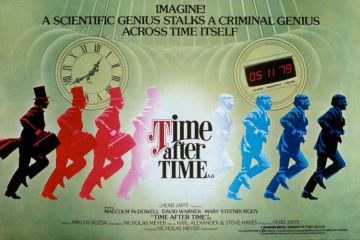 It took novelist and screenwriter Nicholas Meyer (The Seven-Per-Cent Solution) to bring real drama to Wells’ story. The premise of Time After Time is that among Wells’ visitors in the salon for the time-machine demonstration is surgeon John Leslie Stevenson (David Warner), who turns out to be legendary serial killer Jack the Ripper. When the police show up later, Herbert, as in Herbert G. Wells (Malcolm McDowell), sees that his machine is gone, and with it Dr. Stevenson, but as Stevenson failed to follow a certain protocol, the machine returns to 1893 without him. So Wells gets in the machine and pursues Stevenson to the last year visited—1979.

Some comedy, and a commentary on the nature of the two epochs, is gleaned from “visionary” Wells’ inability to comprehend and navigate 1979, and Jack the Ripper’s ability to go with the flow as it were and disappear into the crowds of the future. Wells’ machine lands in a San Francisco museum, and he’s appalled by the déshabillé state of society. He changes his money for dollars (selling the notes to an antiques shop), and finds Stevenson through an employee of the San Francisco branch of the Chartered Bank of London (Mary Steenburgen), where Stevenson has exchanged his own money. “Ninety years ago, I was a freak. Today, I’m an amateur,” Stevenson tells Wells, before eluding his grasp and leading him on a merry chase through 1979, during which Steenburgen’s character becomes a love interest for Wells, and a pawn.

Variety described the Time After Time as “a delightful, entertaining trifle of a film that shows both the possibilities and limitations of taking liberties with literature and history. Nicholas Meyer has deftly juxtaposed Victorian England and contemporary America in a clever story, irresistible due to the competence of its cast.” Janet Maslin of The New York Times wrote, “Time After Time is every bit as magical as the trick around which it revolves.” It was Meyer’s first time directing, and a little clumsy, but the screenplay and actors are so good that no harm’s done to the entertainment.