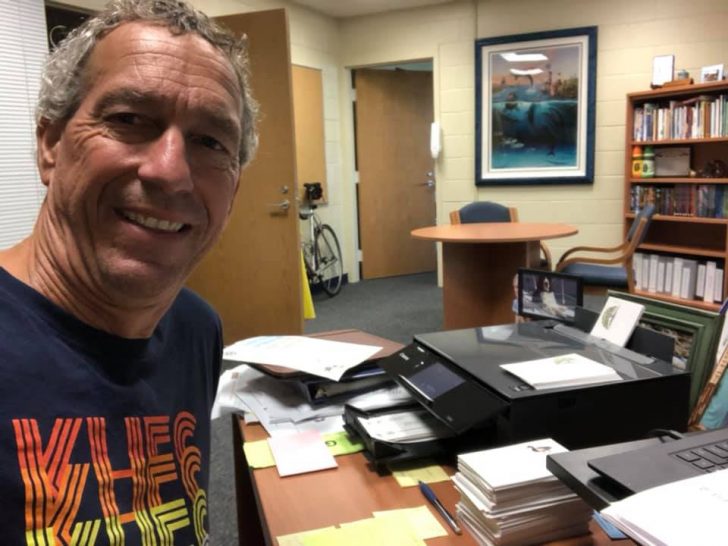 For Dr. Greg Florence, principal of Kitty Hawk Elementary School, after 33 years in education, it’s time to retire. “This has been this has been a good run. Thirty-three years, fifteen years of it in this office,” he said.

Kitty Hawk Elementary (KHES) has been a high-performing school and as Florence put it, was on the verge on the getting the highest grade available until COVID closed the school to classroom learning for a year.

“They started grading schools…to give them an A, B. C. D, F. We missed an A by 1 point one year and it was frustrating. We were poised to go on and nail it. And then the global pandemic hit. I mean, the past two and a half years have been pretty tough,” he said.

For Florence, who sees the classroom experience as the key to good education, the remote learning that COVID restrictions required meant his teachers could not be as effective as they could be.

Florence found a career in education after floundering in school for some time. He was majoring in nursing at VCU and had finished his two years of pre-nursing requirements and was about to head off to the school’s MCV (Medical College of Virginia) campus. But he was also on the water polo and swim teams.

“I was having too much fun playing water polo and swimming for VCU. So I said, ‘If I go to MCV, I’m not going to be able to swim and play water polo anymore,’” he recalled.

Florence looked around for another major that would let him stay in sports but would allow him to transfer credits — and the job of PE teacher fit the bill. Florence admits he was not a good student, and it took him some time to learn how to learn.

The perspective, that everyone has their own way of learning, is at the heart of how he views education. “There’s lots of different philosophies and theories on how to best teach. The bottom line is — all kids are different. They all learn in different ways. And you have to have a balanced approach,” he said.

Florence began his teaching career in the Richmond, Virginia school system teaching elementary PE for eight years, then transferred to the district’s central office as supervisor for Health, PE and Driver Ed.

He enjoyed the role he was in, especially being able to get resources to teachers. But he found it wasn’t what he wanted to do. “I liked the leadership, but I really missed the kids. Getting back to the school level was where I where I needed to be,” he said.

A new elementary school in the Short Pump section of Richmond was opening, and he became its principal, staying there for seven years before coming to KHES in 2007.

With 33 years in education, Dr. Florence has seen systems of evaluation come and go and has some strong opinions. He believes there must be an assessment of how well students are doing and whether schools are effective in reaching their students. But the constant changing of evaluation methods, he believes, puts added strain on educators and makes it more difficult to truly understand how students, schools and the teachers are doing.

“What’s hard is things keep changing every few years. We need to settle in and just teach kids and be consistent,” he said. “You are never going to get consistent results if we don’t do things (consistently).”

He points specifically to how reading success measurements keep changing.

Overall though, he is optimistic about his schools and the future of education and lauds the decision to tap assistant principal Dr. Lisa Colvin to lead Kitty Hawk Elementary School next year.

“One of the best things [departing Superintendent John] Farrelly did was walk in here and say, ‘Hey, I’m going to make Lisa the new principal.’ That eliminated uncertainty, which eliminated anxiety, because we had just come out of a school year that was equally as tumultuous as the year before,” he said.

As for plans for the future. Florence has always loved the water and his plan is to take a year getting his sailing boat ready for blue water, while his wife, Amy, continues to work in the field of early intervention with young children. If everything is ready, she’ll retire in August of next year.

Then it will be time to take his 1984 Bristol 38 sailing ship and explore the world.

“I can get a job anywhere with the ASA [American Sailing Association] schools, or I can walk up the road to the nearest elementary school and substitute teach. I can take my my love of teaching and go anywhere,” he said.