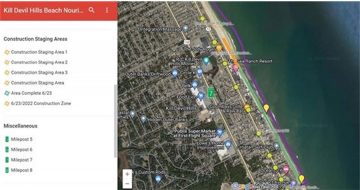 View our project map to see where construction is taking place, what areas have already been completed, and if there are any closures. The map is updated daily: Town of KDH Beach Nourishment Map.

On June 24, Dare County provided an update on three current beach nourishment projects in the county. Here is the latest.

The beach construction for Kill Devil Hills’ nourishment project began on Monday, June 13. The project began around First Street and moved south to Prospect Avenue. The contractors shifted their work to the north and are working to complete construction to the KDH/Kitty Hawk Town border. As of today, construction is occurring between Third Street Beach Access and 1915 North Virginia Dare Trail.

The contractors have been using a sub-line located at the First Street Beach Access landing site; however, they are nearing the end of that line’s usage. (Sub-lines are the pipes used to pump sand from the dredge onto the beach.) Tomorrow morning, the contractors plan to transition to a sub-line that is located at the Walker Street Beach Access landing site. This sub-line is already in place. They will be moving additional equipment down the beach early tomorrow morning and hope to start pumping again mid to late afternoon, pumping south from Walker Street. 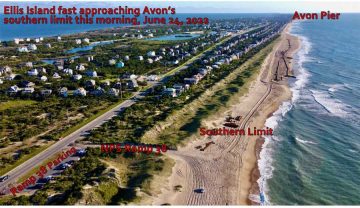 During the first six days of the Avon beach nourishment project, the contractor, Great Lakes Dredge & Dock Co., has made steady progress. As of this afternoon (Friday, June 24, 2022), the dredge Ellis Island has delivered 25 loads of sand onto the beach and placed approximately 250,000 cubic yards of sand between Greenwood Place and ORV Ramp 38.

This volume is equivalent to approximately 25 percent of the total volume for the Avon beach nourishment project. The 3,200-foot section of beach south of Greenwood Place has been nourished. The southern shore pipes will be removed from the beach, and the newly finished section of beach will be opened for public use throughout this weekend.

Over the next two days, pumping will proceed north from the landing point near Greenwood Place to begin nourishing the shoreline toward the Avon Pier.

Starting on Monday, June 27, Great Lakes Dredge & Dock Co. plans to use the Ellis Island to start pumping in Buxton. A discharge point was installed on the beach near the south end of Tower Circle on Tuesday, June 21. Nourishment will commence from that point, and it will continue moving south to the end of the project area, which is located near the original location of the Cape Hatteras Lighthouse.