Hope and frustration mix at Dare Board meeting on doctor crisis 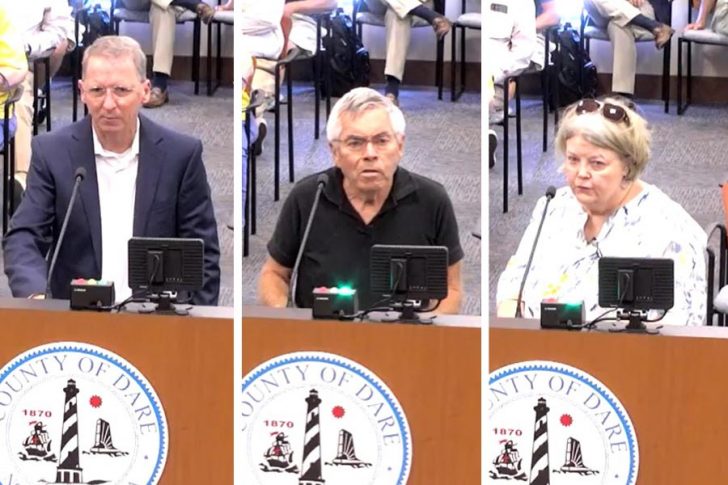 In a packed meeting room on June 28, the Dare County Commissioners held a two-hour special meeting to address what has been characterized in recent weeks as a healthcare provider crisis in the community.

The meeting occurred roughly a month after more than 2,400 patients were notified by letter that they would no longer be able to receive medical care at Outer Banks Family Medicine-Manteo or any other provider with the Outer Banks Medical Group due to a provider shortage.

The June 28 meeting brought together local officials, affected patients and concerned community members as well as representatives of the Outer Banks Hospital and ECU Health, including President of ECU Health Community Hospitals Jay Briley. During the meeting, Briley expressed “a deep level of optimism about how we move forward together. We are confident in our ability to close this gap.”

During the course of numerous public comments that at times elicited applause, two basic sentiments emerged. One was hope and encouragement that the community could unite to solve the problem. The other was frustration and anger at how matters had gotten to this point.

Reiterating key developments regarding the local medical provider shortage, officials at the meeting explained that a full-time provider has been hired for the Manteo office and that patients cut off from care will receive a letter about how to get on the wait list in order to rejoin the practice.

And Dare County Commissioner Steve House told attendees that he has had discussions with Sentara Medical Group regarding expanded primary care services in the county. For his part, Dare County Manager Bobby Outten said that the county has since reached out to the North Carolina Community Health Center Association as well as the North Carolina Academy for Family Physicians in an attempt to help bring more physicians to Dare County.

Among those members of the public who spoke at the meeting was longtime Manteo resident Malcolm Fearing, who declared that “We are in crisis. But we’ve been here before…Some of the best work that I’ve ever seen in our county is when you have different bureaucratic agencies come together to solve people’s problems, and they do it masterfully. That’s what we’re asking now is for people to come together and I’m optimistic that will occur because I know this community.”

“People go to communities to practice medicine because they think their families will be happy there, that they will be supported by the community because it is a hard job,” Dr. Holton said. “I think it’s now time to pull together as a community and just find ways that we can make this a place for physicians who want to come, and little things will make a difference.”

During his comments, Manteo resident Joseph Hawkins described the impact the doctor shortage has had on his family.

“I can stand up here all day and talk about my 99-year-old mother who is in a wheelchair who doesn’t have access to her primary doctor and would have to drive possibly hours to get to a doctor we have not obtained yet,” he said. “The reason we don’t have doctors is Vidant’s fault, they created this situation. I’m so happy the [Manteo and Dare County] commissioner boards are working together and Vidant is very much getting involved in this. But let’s remember, they played a very big part in finding the situation we are in.”

During his closing remarks, Dare Commissioners Vice Chair Wally Overman also expressed some frustration in stressing the urgency of the situation.

“This is a medical service crisis in Dare County,” he stated. “It needs to be treated as such by Vidant and the Outer Banks Hospital. It is your responsibility to provide the primary care required for our community and it needs to be in crisis mode.” Overman added that the community views the crisis as “an all-hands-on-deck situation” and will exhaust every possibility to get more primary care here.

“Again, this is a crisis, and we all need to act like it,” he concluded. “The corporate model makes one think a pencil pusher in Greenville is running things, and not the doctors.”

Correction: This article originally stated that a temporary provider had been hired for the Manteo office. We have been informed this is a full-time position.