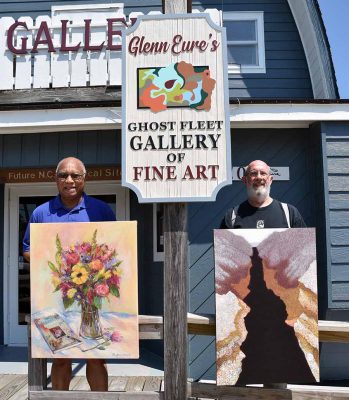 BROTHERS is the title of a celebratory exhibition in the West Wing and Alcove at Glenn Eure’s Ghost Fleet Gallery in Nags Head.  Featuring some 30 paintings by Outer Banks artists James Melvin and Jefferson Glover, the display results from conversations between the two about a joint exhibition and their presentation of the idea to Pat Eure at Glenn Eure’s Gallery.

The two artists not only have the common interest of art but also find contentment in expressing the magnificent beauty and wonder of God’s creation through their work.

Whether portraying people or Outer Banks scenes, Melvin’s theme is peace.  In BROTHERS, he will surprise his audience by including some more abstract expressions of inner being as well as biblical references as in his acrylic titled “Exodus.”  He works in oils, acrylics and pastels and maintains Melvin’s Studio in Nags Head.

Jefferson Glover, recently retired from employment, has begun re-entry into the creation of art and presenting it to the public.  In painting, he attempts to create beauty from nature, looking for a sense of solitude in the midst of subtle relationships between sky, earth, water, trees and fields.  “What I am hoping for, he says, “is that the viewer experiences some contemplation on the One who made it all.”  Glover also devotes his energies as Administrator of Hosea House in Manteo.

So in these uncertain times, these two “brothers” – in art and in Christ – paint about hope, joy and encouragement.  The BROTHERS exhibit will be on display during July and August at the Nags Head gallery.  Hours are 10 am to 4 pm. Tuesday thru Saturday – with a ‘Visit with the Artists’ Reception scheduled for Sunday afternoon, July 10, from 2 to 4 pm.