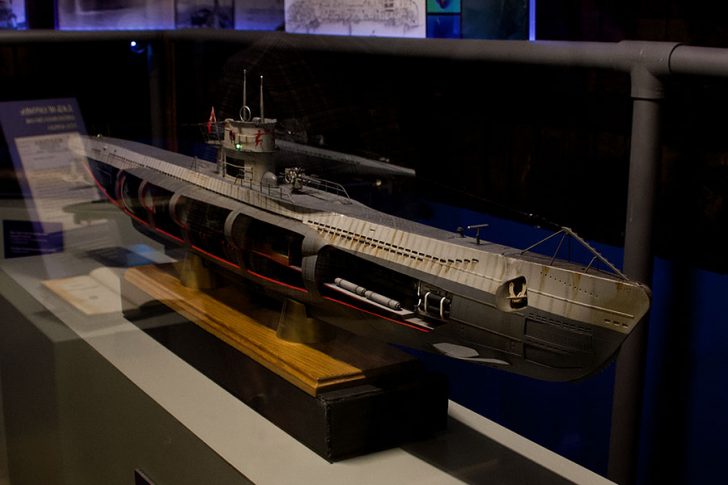 Meticulous in its detail, Mike Mills model of the U552 shows the interior of a German U-Boat. (Photo by Kip Tabb)

The cutaway model of German U-Boat 552 was the centerpiece of the expanded WWII exhibit at the Graveyard of the Atlantic Museum that was unveiled on the evening of Wednesday, June 29.

But the most noteworthy development may have been the announcement by Director for the North Carolina Maritime Museums Joe Schwarzer that the state has earmarked $4.2 million to expand museum’s exhibit space. An additional $500,000 in grant money has also been promised, with Dare County and the Outer Banks Visitors Bureau dividing the funds equally.

With most of the funds in place, Schwarzer is now looking for ways to begin construction. “I’m working with our construction office to get another $420,000. That will allow us to really realize the vision we have had for this place all along,” he said. “We’ve got an awfully lot of stories to tell. Shipwrecks, the Civil War, it’s all here.”

The model of the U-Boat 552 by Mike Mills is the centerpiece of the WWII exhibit — a remarkably detailed reconstruction of the submarine. Cut away along one side, the model gives a look inside the shell of the ship.

The model was donated by Mills. Although no specific dollar figure was assigned the work that he did, museum staff indicated that purchasing a model of that size with the details that were included would have cost over $10,000. 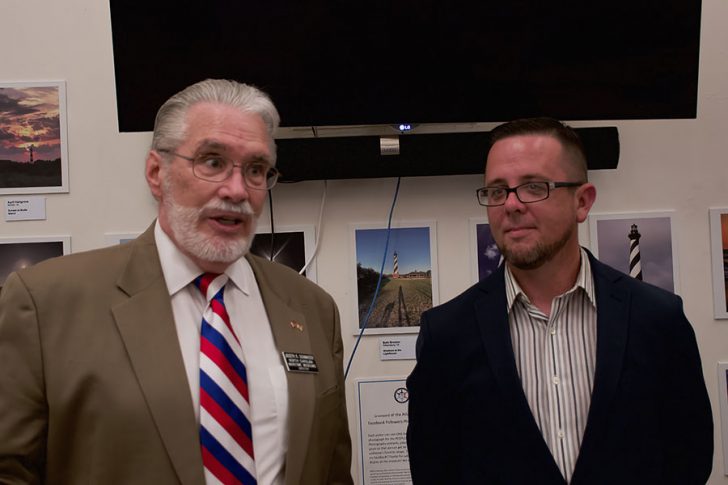 Director for the North Carolina Maritime Museums Joe Schwarzer (L) and Mike Mills, who donated the model of the U-522 discuss at the unveiling of the expanded WWII exhibit at the Graveyard of the Atlantic Museum. (Photo by Kip Tabb)

Mills was meticulous in representing what the interior was really like and what emerges is an exceptionally effective weapon of war that was a miserable experience for the 50 to 70 men who lived inside it for one to three months.

“Life was harsh in there,” Mills said in his remarks after the unveiling of the model. He pointed to the forward head — the bathroom — of the ship, noting that although there were two bathrooms on the sub, only one was used.

“This might not seem like much [for] a crew of anywhere from 50 to 70. But at least from the outset until about maybe a week before they returned from their mission, this was the only toilet available as the only other toilet was in the galley, which was set aside for storage space,” he said.

The U552 was one of the most successful submarines in the German fleet and one of the few to survive the war. Known by its nickname the Red Devil, it was a Type-VII, considered the most advanced of the U-Boat designs.

“We didn’t want to be disrespectful to either victims of the U-Boats or the U-Boats themselves that never made it out from the coast,” he said. “There are still human beings there.”

Mills’ remarks highlighted how close to the U.S. coastline the WWII fighting came, a point Schwarzer emphasized in talking about the importance of the WWII exhibit at the Graveyard of the Atlantic Museum.

“We came perilously close to losing the war right off the coast of North Carolina,” he said. “Within the first 6 months they [German U-Boats] sent 78 ships to the bottom along this coast. It was a horrendous period of our history. But the story has to be told.”

Although the Museum’s display space is limited at this time, the exhibits that are on display record what really happened as accurately as research has been able to show. It is goal that Schwarzer feels is essential in helping the public to understand the world in which we live.

“History is the way it is with all its warts and faults.,” he said. “That’s what we learn from. That’s the spirit of this exhibit.”