WHAT TO WATCH ON TV
Stream On: The (nearly) dearly departed

Though lovers be lost love shall not; And death shall have no dominion. (Dylan Thomas) 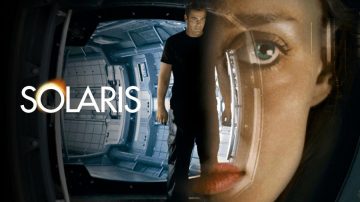 Last time we had a look at the mystical 2001: A Space Odyssey and its less than mysterious sequel, 2010: The Year We Make Contact. Today we’ll see how outer space can lead to inner space, and the ties that continue to bind us, even beyond the grave, in a pair of films that correspond thematically to last week’s.

Solaris, written and directed by Steven Soderbergh, from a 1961 novel by Polish polymath Stanislaw Lem, has the feel of Kubrick’s 2001, but while it is located on a space station orbiting the planet Solaris, its setting is the human heart, or psyche, if you will. It’s Soderbergh’s stab at a novel that had two film treatments already, a 1968 Soviet TV miniseries and a 1972 Soviet movie directed by Andrei Tarkovsky, neither of which Lem endorsed.

Soderbergh had his own vision. (And Lem didn’t like what he heard about this version, either, while not actually seeing it.)

It’s as mystical as Kubrick’s 2001, which held back story points to increase the mystery. Lem’s book, like Peter Hyams’ movie 2010 (and Contact, below), was about “first contact,” a common science fiction theme about the first meeting between humans and extraterrestrial life. Soderbergh’s atmospheric film, however, is primarily about the gulf between objectivity and subjectivity among humans, and the limits to the power of love and memory. Dylan Thomas’ poem “And death shall have no dominion” is referred to repeatedly, and can be seen as a mirror of Soberbergh’s plot in miniature.

Dr. Chris Kelvin (George Clooney) is approached by emissaries for DBA, a corporation operating a space station orbiting the planet Solaris, who relay a message sent from his scientist friend Dr. Gibarian (Ulrich Tukur). Gibarian requests that Kelvin come to the station to help understand an unusual phenomenon but is unwilling to explain more. DBA is unsure how to proceed, as the mission to study Solaris has been sidetracked and none of the astronauts want to return home. In addition, DBA has lost contact with the security patrol recently dispatched to the station. Kelvin agrees to a solo mission to Solaris as a last attempt to bring the crew home safely. (Wikipedia)

When Kelvin arrives on the space station, he finds the crew dead or missing, including Dr. Gibarian, a suicide, with the exceptions of Dr. Gordon (Viola Davis), who is in hiding, and a creepy crewman named Snow (Jeremy Davies, Justified), who is loquaciously non-communicative.

In Graham Greene’s 1939 novel The Confidential Agent, its title character is saddled with psychological scars, one of his most-remarked being that he “is in love with a dead woman” (who had been executed during wartime in error). Kelvin, a rationalist, dreams of his own late wife Rheya (Natascha McElhone) during the first night aboard Station Solaris, but when he awakes is beyond shocked to find her, alive, in the bunk with him, their story together far from over.

If you’ve ever reunited with a missed loved one through dreams, this will set you right back on your heels. If you haven’t, Clooney’s acting and Soderbergh’s direction, cinematography and editing sell it. (And this movie is the only time I’ve seen dreams realistically portrayed onscreen.) This is the phenomenon: the crew members are apparently being visited by loved ones who have passed. Their inability to understand this (let alone the nature of reality itself) is referred to by Dr. Gibarian, again, in a dream, who tells Kelvin that “there are no answers, only choices.” 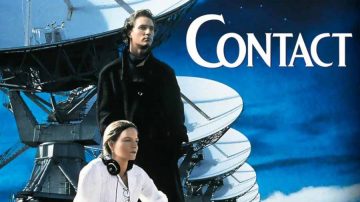 In addition to source material from Stanislaw Lem and (last week) Arthur C. Clarke, we now consider Contact, a down-to-earth astronomy story that nonetheless leverages our mystical ties to one another. It’s based on planetary scientist, cosmologist, astrophysicist, astrobiologist, author, and science communicator (another polymath) Carl Sagan’s only work of fiction, which began as a screenplay that he wrote with then-future-wife Anne Druyan for a film planned in 1979. In 1985 the film stalled, and Sagan turned it into a novel. It re-entered Hollywood development in 1988. A huge project, it finally came to theaters in 1997, directed by special-effects master Robert Zemeckis. (Carl Sagan died in 1996.)

The title card is shown in silence on a black screen before a jump cut showing the earth, in space, with a cacaphonous soundtrack of overlapping news radio, music, TV soundtracks and who knows what, as the camera pulls back through the universe and past other planets. As we get farther away from Earth, we begin to make out individual broadcasts: Walter Cronkite saying “Robert Kennedy was shot in that ballroom..,” radio shows from the 1950’s, ’40’s, ’30’s, until we pull back from the Milky Way galaxy and all is silent again. Then, back further, we see more and more galaxies until they become thick as snow, and the whiteout fades to nine-year-old Ellie “Sparks” Arroway on her new ham radio, making contact with other hams farther and farther away—on this night, as far as Pensacola, Florida.

As her dad (David Morse) puts her to bed, they imagine whom they might ultimately reach on her radio: Mars? Jupiter?

“Dad, do you think we might be able to talk to Mom?”

“I don’t think the biggest radio could reach that far.”

“Do you think there’s people on other planets?”

“I don’t know, Sparks, but if it’s just us, it seems like an awful waste of space.”

When next we see Dr. Ellie Arroway (Jodie Foster, Five Corners), she’s working with the SETI (Search for Extra-Terrestrial Intelligence) program at the Karl G. Jansky Very Large Radio Telescope Array at the Arecibo Observatory in Puerto Rico. There, she meets and briefly hooks up with Palmer Joss (Matthew McConaughey, True Detective), an influential Christian philosopher and author who has the ear of the President’s Science Advisor, Dr. David Drumlin (Tom Skerritt). When Drumlin closes down the Arecibo Observatory, Ellie secures funding from secretive billionaire industrialist S. R. Hadden, which allows her to continue the project at the Very Large Array (VLA) in New Mexico.

Palmer Joss, meanwhile, has become a familiar voice in the media and writes a book suggesting that mankind step away from their phones and the internet to reconnect with the one another, and through them, the divine.

Drumlin moves to cancel the leases at the New Mexico VLA, but not before Ellie and her team finally pick up a signal of a repeated sequence of prime numbers, apparently sent from the star system Vega, about 26 light-years away. When it becomes obvious that aliens from Vega (amusingly referred to as “Vegans,”) are indeed sending us a message, Ellie lands a seat in a machine described by the aliens in which to meet them, supposedly via a generated wormhole.

During her “trip” she finds herself apparently on the beach in Pensacola, when her late father approaches with a message to prepare for further meetings. A Vegan emissary, he says that this scenery and his appearance have been chosen for her comfort.

But Ellie is removed from the machine on earth only moments after she entered it, and her tale is met with skepticism by the government, who have also contributed time and money to the fantastically expensive project. Joss and the church, and the scientific community for once act in concert against Ellie for the hearts and minds of the stunned and engaged public, and the whole project is called a hoax by a Congressional Committee—but the public has their own consensus. It’s a large movie with stunning special effects via Zemeckis, and tasty food for thought from Sagan.