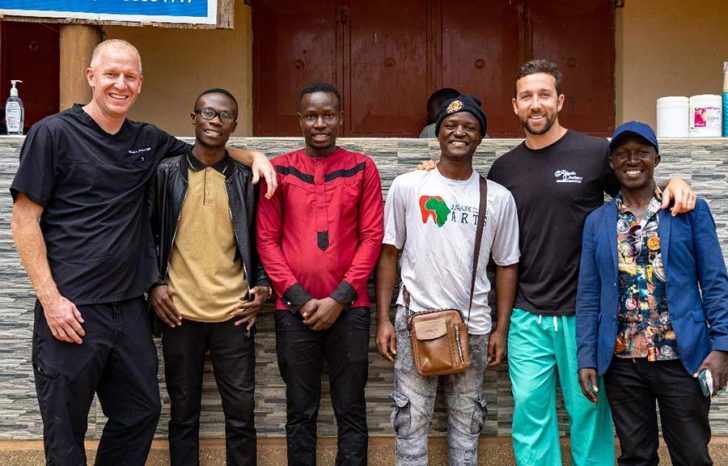 OBX dentist brings his work to those who need it most

Dr. Gunther Heyder took his first African trip, to the nation of Ghana, as an NC State undergraduate back in 2005. He returned from his most recent trip to Africa in April 2022, this time to Uganda, as part of a mission with ARTS (A Reason To Smile), the nonprofit he founded in 2014 to bring dental care to places where it’s needed most.

An Outer Banks native and graduate of the UNC School of Dentistry, Heyder became a dentist in 2012 and partnered with his brother Markus in the Atlantic Dentistry practice in 2015. The creation of ARTS was the result of his desire to take his work far beyond the boundaries of the Outer Banks.

“When I finally came to an understanding that I wanted to start something myself, that’s when I got into looking into nonprofits, after I’d been on multiple different trips” to Africa, he told the Voice. “My vision mission was, ‘hey, I’m going to go to areas that have zero access’” to dentistry.

“In North Carolina, it’s one dentist per 2,000 people,” Heyder explained. “In Uganda, it’s one dentist per 121,000…Just because of where they live and what their traditions and cultures are, and the lack of education…. doesn’t mean they deserve to live in pain.” Dentistry “gives me the trade to go get people immediately out of pain and that’s one of the more magical things of dentistry.”

ARTS first trip to Africa was to the northern region of Senegal in 2015, followed by a journey later that year to Uganda.

“It was a special trip,” he recalled. “I had my brother and my sister come along. It was a small group of us. We went over there, and we saw over 200 patients a day…cleaning teeth, taking teeth out, clearing infections, writing medications for them.”

Uganda, Heyder explained, has now become the focus of ARTS overseas efforts. And as he points out, providing dental care and pain alleviation is just part of that effort. The larger goal is to foster a dentistry infrastructure in the local community there.

“Over the past seven years, it has been us going over there and doing treatment,” he said. “But that is not sustainable. With all non-profits, sustainability is the key word. So we’re trying to focus on how can we go over there and make a real impact. We really worked with education and prevention.”

According to Heyder, that education and prevention component means, among other things, speaking to the hundreds of patients waiting in line for dental care and inviting community leaders to their discussions about dental hygiene. In addition, the organization is involved in trying to build a set of clinics in Uganda to be run by a local organization there.

And Heyder’s ARTS efforts are not just solely for the benefit of those residents of Uganda in desperate need of care. They are also for those who come with him to see the world and to help those less fortunate. On his last Uganda trip, he brought five local volunteers — ranging from a Kitty Hawk firefighter to his 15-year-old niece.

The ARTS nonprofit, “opens up this avenue for anyone who wanted to go on a non-religious, non-government, non-partisan-based trip,” Heyder explained. “We’re just going over there to do volunteer work.” He does warn, however, that when volunteers “come on my trips…you’re going to work your tails off.”

With his next trip planned for either this fall or the beginning of next year, Heyder wants to continue to export what he considers to be the Outer Banks’ greatest strength.

To learn more about ARTS, log on to About Us | Volunteer Abroad | A Reason To Smile (artsmile.org)