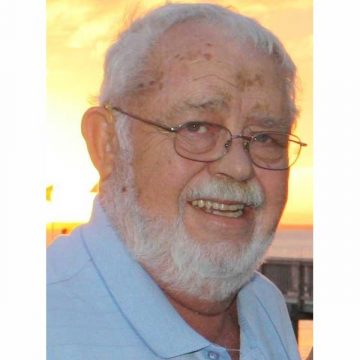 Richard Lee Liston, 82, passed away peacefully on July 10, 2022. He was a devoted husband to his wife of sixty-one years, Joan Liston, and a loving father to his three children and four grandchildren.

Dick was born in Rockford, Illinois on May 3, 1940 to Mildred (Ireland) and Carroll Liston. He married his high school sweetheart while they completed their undergraduate degrees at the University of Illinois. He then went on to graduate from Syracuse University with a Master’s degree in Photogrammetric Engineering.

Dick worked in service of his country at the Central Intelligence Agency for ten years, followed by twenty years at the United States Department of Agriculture translating satellite images into maps for national security and soil conservation purposes, laying the foundation for today’s global positioning service (GPS).

After many years of annual vacations at the Outer Banks, Dick and Joan moved to Southern Shores in 1999 and enjoyed a long and wonderful retirement at the beach when they weren’t cruising through Europe and the Caribbean.

Dick was an active member of the Unitarian Universalist Church of the Outer Banks, editing the newsletter and taking care of the grounds. He also enjoyed fishing with the anglers club and debating with his mens’ discussion group.

Dick leaves behind his wife, Joan; his three children and their spouses, Todd and Tracy Liston, Tanya and Reese Murdaugh, and Kyra & Jeremy Olson; his four grandchildren, Skyler, Cameron, Whitney, and Jack; his sister, Karen Heaton; and many other relatives and dear friends.

Dick loved fishing (especially with his son, Todd), photography, computer programming, woodworking, gardening, and more than anything, his family. He created many family videos and slideshows with witty narration that will be cherished more than ever in his absence.

A service celebrating Dick’s life will be held at the Unitarian Universalist Church of Outer Banks on September 10, 2022 at 11am.

Please express condolences to the family via the online register at gallopfuneralservices.com. Gallop Funeral Services, Inc was entrusted with arrangements.