Currituck Board approves zoning change for campground at H2OBX Waterpark 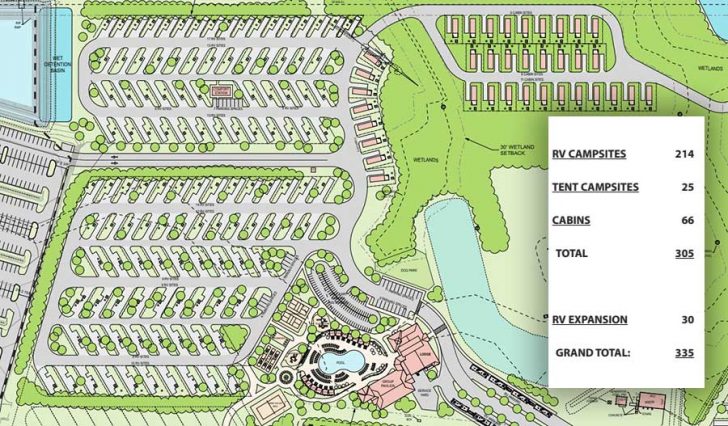 The proposed layout of the campground at the H2OBX site. View a higher res of the H2OBX RV & Waterpark Resort.

At its July 18 meeting, The Currituck County Board of Commissioners unanimously approved a zoning change that would potentially pave the way for a campground on the H2OBX Waterpark property in Powells Point that could have up to 335 campsites.

The applicant, H20BX Waterpark, LLC., would still need to return to the commissioners to secure site plan approval in order to move forward with the project, H2OBX RV & Waterpark Resort. If constructed, the campground would include a mix of RV campsites, tent sites and cabins that would be built in at least two phases.

The campground, which will be accessed from the existing waterpark entrance, would also feature a swimming pool, playground, pickleballcourts, cornhole courts, shuffleboard courts, volleyball courts, a lodge and pavilion, golf cart rentals and a dog park.

Currituck County Planning Director Kevin Kemp told the commissioners during the meeting that the application marks the first one for a campground since they amended the zoning ordinance in February that permits the use in certain instances. Of the total 97 acres that constitute the site, 60 of that will be used for the campground,

Development of the site would be done in two phases due to the capacity of the on-site wastewater plant, Kemp explained. The plant has adequate facilities for the first phase, but if additional wastewater facilities are needed for the second phase, H2OBX would need to obtain necessary state permits.

One of a number of conditions that were part of the zoning change approval on Monday is that the project engineer designate the number of campsites and which amenities would be part of the initial phase.

Jerry Siever, who lives adjacent to the waterpark on Lucinda Lane, was one of several residents who spoke during the public hearing regarding traffic safety concerns.

“This is a great looking project here,” Siever said. “But I want all of you to listen very carefully because it will happen…if there ain’t a light there and campers are coming out of there, someone is gonna be killed. I’m telling you.”

Commissioner Selena Jarvis, who made the motion to approve the zoning change and also added the requirement for a traffic study to the list of conditions, urged residents to go to the N.C. Department of Transportation’s website to voice their concerns regarding the need for a traffic signal at the site.

“I realize this is a conditional rezoning [application],” said Jarvis. “But I think we need to voice our concerns for the next step. If this conditional zoning is approved tonight, I really believe that the next step is not going to be as palatable,”

“It’s dangerous to live in Lower Currituck,” she noted, adding that “we don’t get some of these concerns addressed…this is not gonna make it any less dangerous.”

Ken Ellis of H2OBX Waterpark said that he would be agreeable to a traffic study as well as be a proponent of a traffic light at the entrance, which would be up to the N.C. Department of Transportation to install.

Of the project in general, Ellis noted that the applicant was “looking to do a first-class facility.”

“Obviously we’re very keen on Lower Currituck, we’ve invested down there, and we have a nice recreational property,” he told the commissioners. “We do think this will be a good complement for the area and the park itself. They do work well together.”