Group formed to address shortage of providers and resources 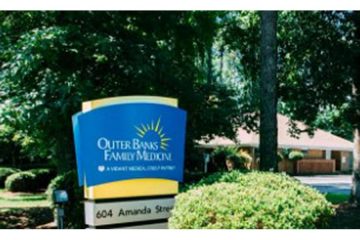 The Healthcare Task Force was formed in the wake of the provider crisis at this Manteo medical practice.

During its July 20 meeting, the Manteo Board of Commissioners appointed a Healthcare Task Force that will be charged with identifying solutions for the lack of adequate healthcare in Dare County.

Headed up by longtime resident Malcolm Fearing, the task force was formed in response to the recent news that more than 2,400 patients at the Outer Banks Family Medicine in Manteo were losing their care due to a lack of providers. That development galvanized a broad discussion among residents, as well as county medical and local officials, about the critical lack of health care providers and what could be done about it.

Since news of the loss of providers at the Manteo practice surfaced earlier this summer, the Outer Banks Medical Group has announced that two primary care providers are being added to the Manteo practice – Dr. David Worthen and Dr. Erin Baker. Dr. Worthen’s father, Dr. Mark Worthen, will also be joining the medical group this fall at a future Nags Head location.

Fearing, who told commissioners during the July 20 meeting that the task force plans on meeting “as soon as possible,” outlined three initial priorities he sees the group will have.

“Number one is patient care,” he said. “The second bullet point would be retention and recruitment of healthcare professionals who are presently in the system.”  Lastly, he said, the group would focus on the issue of facilities, both in the short term and long term.

Along with Fearing, the members of the task force include:

“When we meet and organize, we will determine the direction the task force should go in because you have very competent people who have diverse [perspectives] on the complexity of issues,” Fearing said.

During the meeting, Manteo Commissioner Sherry Wickstorm summarized what she saw as the role of the task force.

“So the Healthcare Task Force will identify and better define these healthcare needs of our public and then they will also analyze and make careful examination of the ideas and concepts proposed by residents and citizens regarding healthcare,” she said.

After the research and the discussions are completed, Wickstorm said she envisioned the task force making recommendations first to town staff and then to the board of commissioners.

Fearing also added that the public would have the opportunity to make comments during task force meetings and also online, however the online system for facilitating this has yet to be determined.

Manteo Town Manager Melissa Dickerson noted that, “I think as recommendations are made by the task force, I will bring them to you after having appropriately vetted them through the town attorney,” she said. “That’s the important piece, that after they come from the task force, I will package all that together and bring it to you. And hopefully we will offer you some solutions with the recommendations.”