WHAT TO WATCH ON TV
Stream On: The rise of the independents–private eyes Peter Gunn and Joe Mannix

Long shot at that jumping sign, invisible shivers running down my spine…. I don’t know how much more of this I can take—She’s filing her nails while they’re dragging the lake. 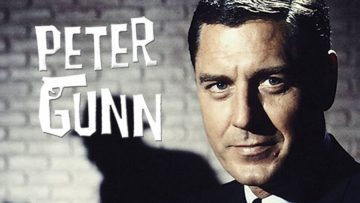 In 1958, Dragnet was Law & Order before Law & Order was, a mechanical police procedural that had the flat feel of verisimilitude. Detective Joe Friday’s instruction to witnesses, “Just the facts, ma’am,” was as famous as the ominous opening notes of its theme. But Edgar Allen Poe’s C. Auguste Dupin, one of the first detectives in fiction, was an amateur, and Conan Doyle’s Sherlock Holmes described himself as a private “consulting detective.”

And so actor-turned-director Blake Edwards brought to TV a private detective, one with a colorful personal life (albeit in black and white), also the first televised detective whose character was created for television, instead of adapted from other media.

Before the credits roll on the first velvety black-and-white episode, over Henry Mancini’s jazzy soundtrack, a limousine is pulled over in the night by a police car. The limo driver says, “I think you’ve made a mistake. You know who you’re stoppin’?” Mr. Fusary leans into the light from the back seat and says “Hello boys.” The front-seat passenger says, “Mr. Fusary is late getting home. He’s expecting guests, and…” but the officers pull their revolvers and assassinate the three in the limousine. We don’t see inside the limo, but in a trope later used by Roman Polanski in Chinatown, the limousine’s horn sounds steadily (from the driver’s corpse now on it) and the cops get in their prowler and drive off.

Not only is the show’s protagonist Peter Gunn, who shows up at Fusary’s funeral with a voice-over narration about this unique old-school gangster who made it “a little past sixty,” a private eye, but Fusary’s killers are apparently police. A bright line and a bold plot choice indeed!

At the funeral, Peter Gunn, sophisticated and sardonic, is bearded by a taciturn fellow in a suit, “Funny seeing you here,” before the suit gets into a police car and drives off. Fusary’s associate comes up to Gunn with some cryptic remarks about Gunn’s “relationship” with Fusary; about how he’s in charge now, and he’s gonna make some changes. “And one of the changes is you.”

The perfect, intriguing beginning to a hardboiled and suspenseful series, drenched in jazz and hipness, that received eight prime-time Emmy nominations during its three seasons. Jack Weston (Gunsmoke) is especially good as a stooge in over his head in the pilot, a foreshadowing of some of the fine guest stars to come, which included Diahann Carroll, James Coburn, Ted Knight, Ross Martin, and Roy Thinnes. Peter Gunn was number 17 in the Nielsen ratings for the 1958–1959 TV season and number 29 for the 1960-61 TV season. 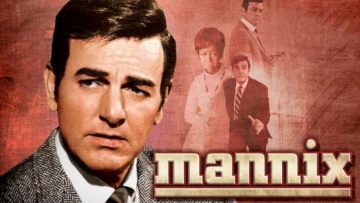 Studio head Lucille Ball thought that the computers were too high-tech and over viewers’ heads (it was 1967, and the computers were impressive, but not that important to the plots), so by season two, Mannix had quit Intertect, setting up an office with a secretary, Peggy Fair (Gail Fisher), a police widow, and a collection of contacts in the Los Angeles Police Department. Fisher became the first black actress to win an Emmy in the Outstanding Supporting Actress in a Drama Series category in 1970, and she was the first black actress to win a Golden Globe as Best Actress in a Television Series – Drama, in 1973. Connors also took home some awards for his role as Joe Mannix: He won a Golden Globe, as Best TV Actor – Drama, in 1970, and the series won the Globe for Best TV Show – Drama in 1972.

The series, with another jazzy soundtrack, was set in the sunshine and bright colors of Los Angeles, in contrast to the gloomy waterfront city of Peter Gunn. The visual cues referenced popular films of the day: The Thomas Crown Affair (use of split screens), Goldfinger (kinetic camerawork and large, stylized action set-pieces, including a convincing helicopter crash and explosion) and Bullitt (relentless coolness and attendant jazz esthetic; in fact, Bullitt’s Lalo Schifrin, who also wrote the Mission: Impossible theme, composed the Mannix music). The plots were intricate and fast-moving, and Mike Connors recalled Sean Connery a bit. He had starred in the James Bond spoof film Kiss the Girls and Make Them Die in 1966, and the Mannix pilot was titled “The Name is Mannix,” a likely homage to “The name is Bond…James Bond.”

In the pilot, Mannix is sent out on a missing person case for a retired gangster that has as many twists as Raymond Chandler’s The Big Sleep. And among the series’ guest stars, in perhaps a nod to the Yardbirds’ appearance in Antonioni’s film Blow-up, are Steve Stills, Neil Young and the Buffalo Springfield playing, not lip-synching, a long version of their song “Bluebird,” in the background of a scene Mannix plays with guest star Tom Skerritt.

(As of July 2022, the only streams I’ve found for Mannix are season one, on the MOVi Crime and Mystery Channel on Roku; and season six, with a subscription to frndly TV. Check out ReelGood.com going forward.)