Theatre of Dare seeks cast to get Caught in ‘The Mousetrap’ 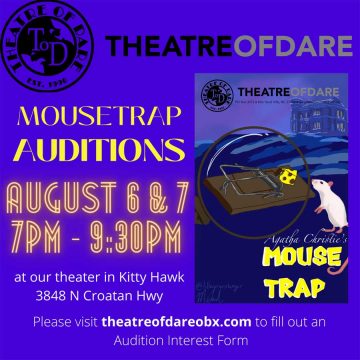 With a new season just around the corner, Theatre of Dare will be holding auditions for its first production, Agatha Christie’s classic The Mousetrap on Aug. 6 and 7. The open auditions will be held from 7-9:30 p.m. both evenings at T.O.D.’s Kitty Hawk theater (3848 N. Croatan Highway).

“It’s a wonderful play with a multitude of fascinating characters,” said director Stephanie Harkness-Moxley. “It’s got suspense, drama, a little comic relief and a big surprise ending. I’m looking forward to seeing a lot of great local talent at the auditions.”

The Mousetrap holds the record for the longest-running play in the world, having been produced continuously on London’s West End from 1952 until a pandemic-forced suspension in 2020. It restarted its run last year and has now racked up more than 28,000 performances.

Written by famed mystery author Agatha Christie, the play takes place at a British Inn where guests and staff are stranded during a fierce snowstorm. After a local woman is reported murdered, it becomes increasingly clear that the culprit is among them. A police detective arrives on skis and interrogates the suspects: the newlyweds running the house, a spinster with a curious background, a young flamboyant architect, a retired army major, a strange man who claims his car has overturned in a drift, and a jurist who makes life miserable for everyone. After a second murder occurs, the fear and suspense escalate.

All of those roles will be available at the auditions, and people interested in joining the cast can get more information by logging onto theatreofdareobx.com/the-mousetrap and filling out the audition interest form.

The Theatre of Dare production of The Mousetrap will be performed October 7-16 in Kitty Hawk. Season tickets for all of T.O.D’s regular season productions are now available on its website.